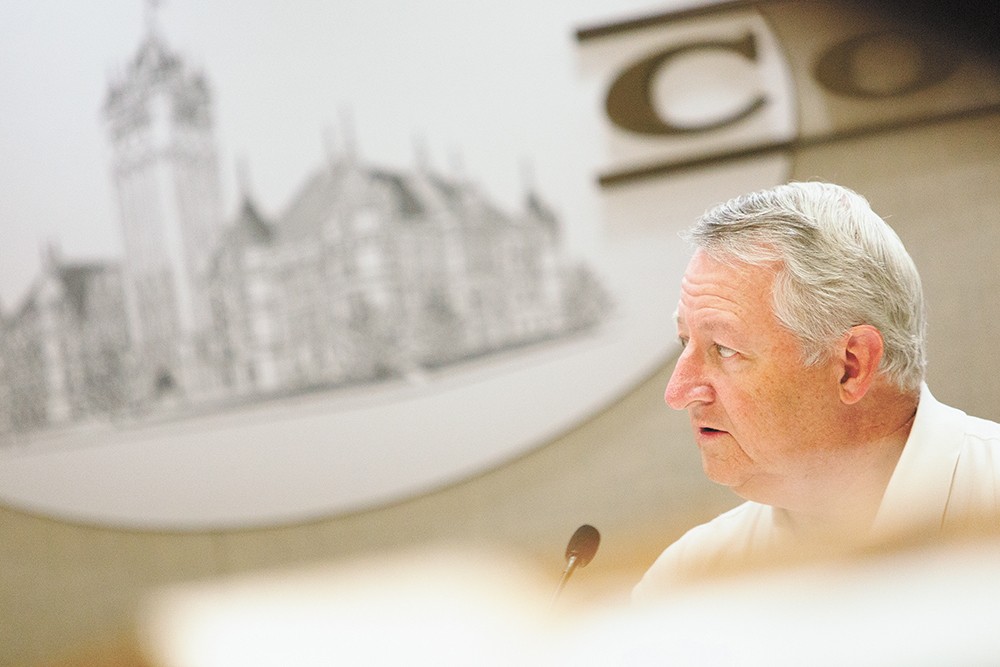 Young Kwak photo
Spokane County Commissioner Al French: "If you want to spend all your money on food and rental assistance, then what happens when you run out of money? People are still unemployed."

On Wednesday last week, Spokane County Commissioner Al French stands in front of a rare in-person audience of elected officials and local leaders — many who've come wearing face masks. The chart looming behind him shows the devastation that the coronavirus has wreaked upon Spokane in under a month.

He points one by one to each economic sector — each one of the figures representing tens of the thousands of jobs lost. The manufacturing sector. Administrative services. Even health care. They're all in crisis.

The next morning, the sum became official: $91.2 million landed in Spokane County's account courtesy of the federal government's huge stimulus bill. With the American economy in free fall, the Coronavirus Aid, Relief, and Economic Security Act — or CARES — has handed counties like Spokane a one-time windfall to repair the damage. With stakes that high and a pool of money that large, a heated debate has ignited over how to spend it.

"There are a lot of folks who clearly have needs and or agendas that they would like to see satisfied with the revenue available from the CARES funding," French tells the Inlander.

Yet making the final decision isn't up to them. It's up to only three people — county commissioners French, Mary Kuney and Josh Kerns.

And so when French told the Spokesman-Review last week that his No. 1 priority would be assisting local businesses recover and that spending one-time cash on efforts like rental mitigation are unsustainable, it alarmed some nonprofit advocates.

"Commissioner Grinch thinks mitigation efforts like rental assistance are 'not sustainable,'" Stuckart lamented. "There needs to be a public process and dialogue. Not one county commissioner giving it all to businesses."

No, French says, he's not heartless. His focus on healing battered businesses, he says, isn't callousness — it's prudent long-term thinking, he says.

Not only that, French says, but subsidizing rental checks would result in a lot of money disappearing into the hands of out-of-state property management companies, instead of continuing to bounce around the local economy.

That doesn't mean there isn't money to spend to help people with rent, he says. But French believes that assistance should come from other pools of money, like Community Development Block Grants, to give the county the biggest bang for its buck.

When the Spokane Alliance, an activist group of local businesses and nonprofits held a press conference last week, members said they felt that the commissioners' hearts were in the right place — but they wanted to make sure they were listening to everyone.

"While the money is given to the county, it's to support everybody," says Gretchen Rehberg, bishop with the Episocopal Diocese in Spokane. "How do we best make that decision? If it's just the county commissioners making it, then I'm nervous. They are intelligent, well-meaning people who don't necessarily have the wisdom of the collective."

Indeed, the county commissioners repeatedly stress that they want to hear from everybody. They're not only holding weekly meetings with regional leaders, but last week they also launched an online survey at spokanecounty.org/CARESact. It asks local residents two simple questions: What sort of industry do you work in? And where should CARES Act funding be spent?

In the first 24 hours after the survey was posted, Kerns says, the county heard from over 700 people. Kerns himself met with Spokane Alliance over Zoom to hear some of its members' views about things like child care.

"They were hitting it from an angle of 'child care, those are small businesses as well,'" Kerns says. It's an argument he respects.

He also says that after watching a presentation from Second Harvest Food Bank last week about a potential food bank famine, food security is one of his top funding priorities.

"There could be where there's a gap," Kerns says. "I would like to be able to have some funds to step in and help with that."

Spokane City Administrator Wes Crago walks to the #InlandStrong podium at last week's Spokane CARES meeting with a black balaclava hanging loosely around his neck. He hammers at the importance of spreading the CARES Act's millions into different "buckets."

"Business is huge, gigantic," Crago says. "But it's not the only bucket we have to worry about. ... Housing, if we drop the ball on that one, the expenses, the [secondary] effect on that one could be devastating."

What about reimbursing the regional emergency operations center for the $9 million that has already been spent to combat the coronavirus? Crago asks. What about public health funding for things like tracking infections and testing?

Sheriff Ozzie Knezovich, with a blue-and-white face mask around his chin, reminds the group about how much damage nonprofit health care organizations have suffered lately.

"If we allow the health care systems to go down, everything that we've done is for naught," Knezovich says.

"Maybe the county shows up and says, 'You know what, we're going to buy — random number — 10,000 testing units' and distributes them through the community," French tells the Inlander. "If they're healthy, they can go to work."

Similarly, Spokane City Council President Breean Beggs suggests that part of the money be spent on COVID consultants, experts who can outline a plan for what each type of business needs to do to safely reopen.

After all, French's vision isn't about making individual grants to local businesses so much as aiming to solve the root problems that are holding them back.

"We don't want to pick winners and losers," French says. "We want them all to be winners."

That might mean loosening regulations on restaurant patio dining. Or, in the case of the beleaguered tourism industry, it could mean a renewed marketing effort.

"How do I convince people who don't live here to come here and spend their money?" French says. "Maybe that's an advertising campaign that we conduct to bring people back to Spokane so that they'll spend their dollars at conventions and hotels and restaurants and retail."

But Commissioner Kerns notes that the ongoing uncertainty complicates that plan: Big conventions and major events are likely to be one of the last things to be allowed to return to full capacity. Tourism campaigns don't make much sense if the businesses are still shuttered.

"We don't know when the gun's going to go off to allow those people to come back," Kerns says.

Liberty Lake Mayor Shane Brickner momentarily takes the #InlandStrong podium with a proposal of his own: Take some of the responsibility out of the hands of the county commissioners. Split it up. Give 55 percent to the county to spend as it chooses, but divide 45 percent between the county's cities according to the size of its population.

But when French returns to the podium, he gives Brickner an unequivocal response: "No."

"Our economy is a regional economy," French says. "The minute we start balkanizing the funds, it reduces the effectiveness of it."

Splitting up the funding, French argues, could lead cities to begin competing against each other instead of working together.

And while Brickner counters from the audience that dividing up the pie would actually avoid some of the tension, French shrugs it off with an "OK," before stressing where the power ultimately resides.

"Ultimately, the decision will be made by the Board of County Commissioners," he says.

But shouldering that responsibility, as French knows very well, also means shouldering the risk if the county spends the millions poorly. They may not get many more chances.

"At some point the feds are going to run out of ink. And they'll quit printing money," French says. "And if we don't have our economy standing up... we're dead. We're done." ♦