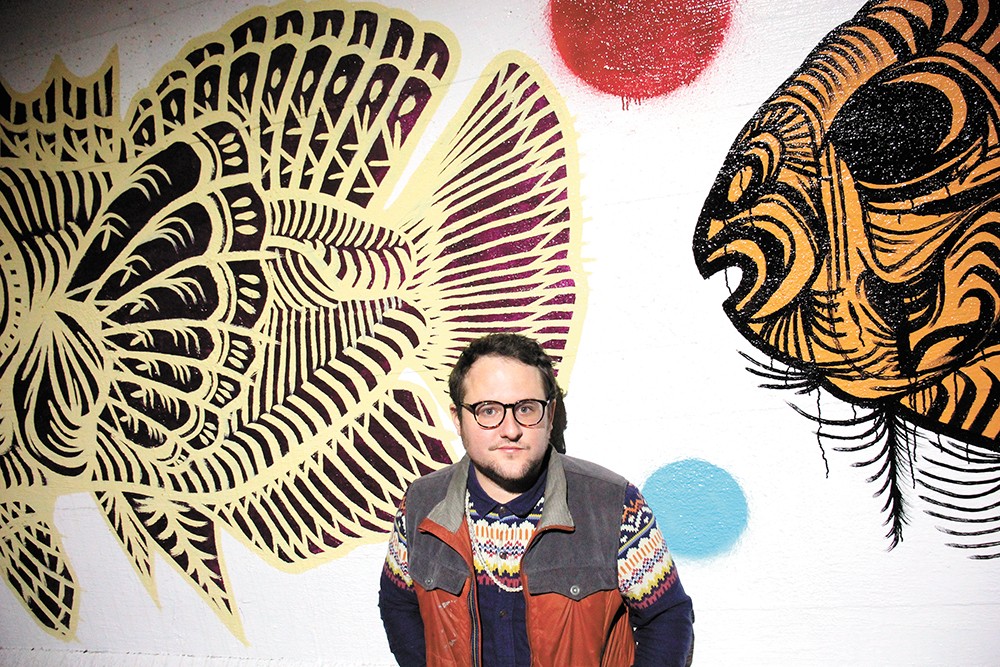 Matt Smith works in circles. Always moving, always dividing his attention in different directions, going from one station to the next: kitchen, bedroom, backyard, work table, repeat. Rap music plays, maybe something from Vince Staples, or new Deerhunter. He has been drinking wine, not anything expensive, but just something to get the creative flow going, or steady a shaky hand.

He's worked full time as an artist for the past few years, juggling projects and occasionally dabbling in web design. It's worked out for him. After college at Evergreen in Olympia and some extended travel, he moved back to Spokane. This is his hometown, and now the artist just put his stamp on it.

Smith was commissioned by Spokane Arts in October to complete a public mural under the Stevens Street BNSF overpass. It's his first mural in a public space, and it's pretty huge. Six giant alien-looking fish with bug eyes pop out from the concrete wall on one side. A neon-yellow and teal fish jumps out from the cold concrete. Its scales and fins resemble the bold styles of coastal Native design. It was designed partially at the suggestion of a man who often sleeps under the overpass, Smith says.

Each fish has its own personality and vibrancy, but with similarly energetic colors, bold lines and repetitious patterns. The style is a welcome sight just in time for the increasingly chilly, leaf-blown cityscape of Spokane in November.

"My biggest goal for the last five years was to get one in my hometown," Smith says. "One big mural here. I really want to use it to launch me into a career, open some doors, apply to other cities — Seattle has some great mural work — maybe Portland. Just in the Northwest."

Spokane also has some great murals, he says. And the scene is growing. When he moved back to town five years ago, the art scene still felt like it was suffering, "but it was on this verge," Smith says. Being part of that evolution and part of that process has been exciting and it's what's kept him in Spokane, he says.

The new mural pays tribute to the Spokane River and its major role in the region's ecology, but it's also just as easily a reflection of Smith's own influences, travelling in the tropics of Southeast Asia, where he studied art. It was there that he found himself attracted to the natural patterns of the region's monstrous insects and to the various influences of Thai, Chinese, Japanese and Indian artwork. Since finishing the public piece, he's landed three new mural commissions.

"It's hard to describe, as an artist, why you would dive into any sort of exploration, or how it has any deep-seated meaning inside of the person's history," Smith says. "I'm just a fiend for that stuff. I think my color palette is relative to a lot of the colors I saw over there, in Thailand, just wandering through the temples."

He describes his style as a mix of tropical colors and line work mixed with psychedelia, but not in the stereotypical stoner sense. "It's very organic," he says.

Painting the line work can also be meditative, easing any anxiety and bringing him to a "very Zen" space. He loses himself in that kind of work, he says.

The bonus is the interactions he gets from passersby.

"Aside from an ego thing, it's very fulfilling to see that people want to engage with something that you created. It's people engaging with a part of you. It's yours. No one can really have it, but they can experience it." ♦

Two additional murals have also recently gone up in Spokane:

The original print version of this article was headlined "Tropical Punch"