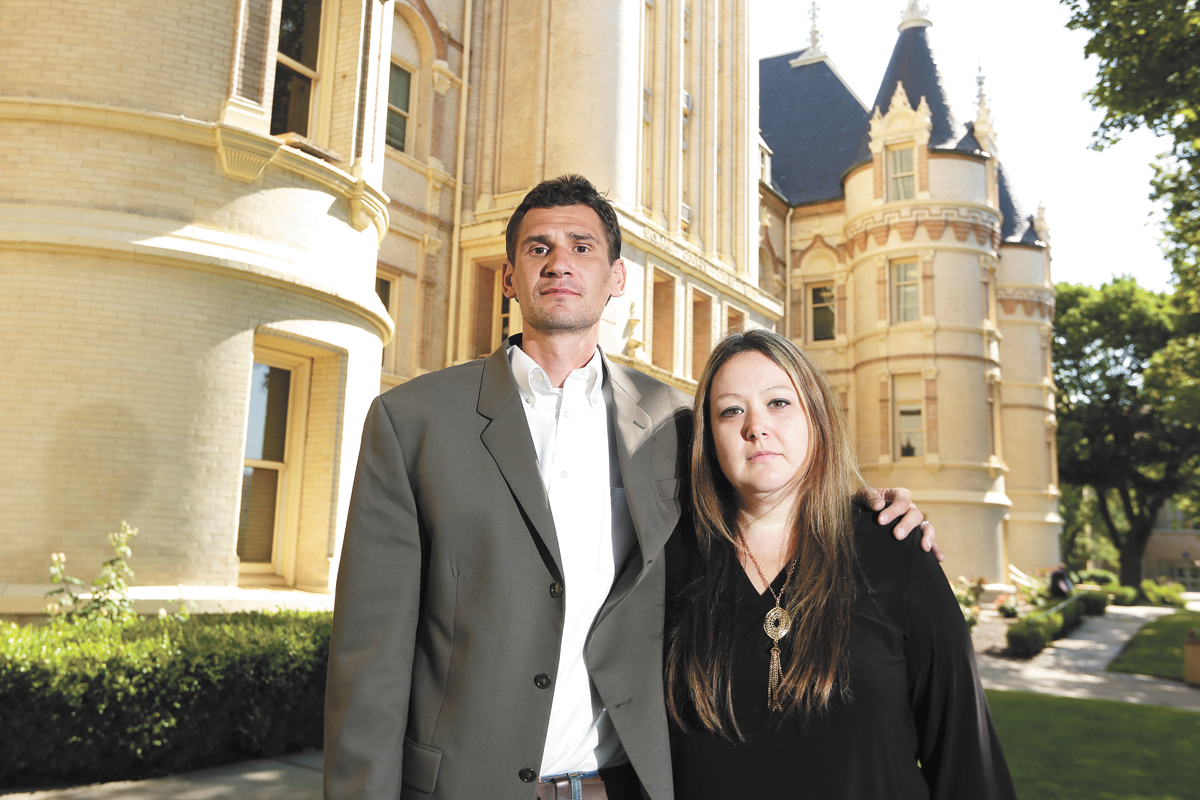 John and Kara Allen's son didn't want to be in school. In the mornings when he'd get to his kindergarten class, he'd yell, knock things off the desk and curse to express his displeasure.

Their son, who the parents asked to remain unnamed in this article, had separation anxiety, according to a later diagnosis. Despite that, Spokane's Arlington Elementary School decided during the 2016-17 school year to put him in an isolation room for hours at a time.

Eventually, until the end of second grade, it became a ritual: Each morning at school was spent in isolation, the Allens say, with only a teddy bear there to comfort him as administrators stood outside until he was able to come out again. At times, he'd come home with bumps and bruises from harming himself inside the room. At least once, he vomited on himself, and another time he soiled himself, says Kara Allen.

"He did not like it at all. But the administrators and the counselor told us that this is the right way to handle it, that once he understands that we mean business, he'll turn it around," John Allen says.

In fact, it was a violation of state law, according to an investigation conducted by the state Office of the Superintendent of Public Instruction. It was also part of a pattern in Spokane Public Schools. In 2019, the state said Spokane schools were "overusing" restraint and isolation against students by doing so when they shouldn't or by keeping them confined longer than necessary.

Earlier this month, Spokane Public Schools settled a lawsuit with the Allen family for $135,000. As part of the settlement, the family cannot discuss individuals or administrators at the school. But the school district agreed to a consent decree outlining a series of measures meant to ensure it is following the proper procedures for restraint and isolation and to comply with obligations to provide functional behavioral assessments of students.

Separately, the school district has gone a step further in reforming its use of isolation: Starting this fall, there will be no more isolation rooms at all in Spokane Public Schools, says Becky Ramsey, director of special education.

"We've already been reducing the number of isolation rooms over the last couple of years," Ramsey says. "And we've found that through other de-escalation techniques, we're able to keep the students safe."

Isolation or restraint of students is prohibited under Washington state law, unless the student is posing an imminent likelihood of serious harm. At that point, staff must closely monitor the student to prevent self-harm and end the isolation or restraint as soon as the threat has ended. Then schools must also notify parents of the incident in writing.

But those laws were not followed for the Allens' son, says their attorney Marcus Sweetser.

"In this case, you have a child with separation anxiety who was isolated and separated for up to four hours at a time," Sweetser said at a court hearing earlier this month. "And to no one's surprise, the issues got much worse."

An OSPI investigation of the situation in 2019 found that not only was this an "inappropriate" use of isolation, but that the school district failed to provide any writing or documentation of the isolation as required. The room where the child was being isolated was not padded like other designated isolation rooms; instead, it was an empty room by the front office with a teddy bear in it.

The isolations were also not reported in the school district's data system or to the state. Arlington, in fact, had zero reported isolations in the years the Allens' son went there, Sweetser says. And because many schools in Spokane reported zero isolations at that same time, it may indicate isolations were being underreported.

Yet even without those isolations being reported, Spokane had much higher rates of isolation than other districts in the state. In the 2017-18 school year, all of Seattle Public Schools reported 141 isolation incidents. Spokane reported more than 3,200, and one Spokane elementary school — Holmes Elementary — reported 520 isolations alone that same year.

The Allen family wanted to enter the consent decree as part of the settlement so that other students wouldn't have to go through what their son did. It's meant to ensure the school district sets a variety of benchmarks and goals so that students with disabilities "receive the programs and services they are entitled to," court documents say. It also calls for the district to report isolation or restraint as required and appoint a person to ensure district compliance with the OSPI standards.

"The circumstances that this family experienced," Sweetser says, "they were not experiencing alone."

Since 2019, Spokane Public Schools has already implemented many of the benchmarks and goals that the consent decree in the Allen case calls for. Ramsey took over as the director of special education around that time, and she helped to immediately make those changes.

"Looking back on past practices in the district, there was a lot that needed to be changed. I think the changes we made quickly, including removing the isolation rooms, has shown that the district is committed, as I am, to supporting our students with disabilities," Ramsey says.

Ramsey says teachers and administrators received new training with a "stronger focus on trauma-informed practices," which alone accounted for a large reduction in isolation and restraint incidents. Instead of sending a child to an isolation room, for instance, a trained staff member may use a "therapeutic hold" meant to be safe for the students and staff.

Additionally, Ramsey says the district has added school psychologists and behavior analysts to help with the most difficult students, along with improving data systems.

As for the requirement in the consent decree that the district will appoint someone to ensure compliance with isolation and restraint laws, Ramsey says she is already that person.

In court, Sweetser said he was glad to see the school district express a desire to change by agreeing to the consent decree.

"We feel that the school district here is stepping up," Sweetser says. "And they do want to do the right thing on behalf of children going forward."

Meanwhile, John and Kara Allen's son just finished fourth grade at his new school. They say his behavior issues disappeared within 10 days at the new school starting in third grade, where he was initially placed in a behavioral intervention program.

"They said to me, 'This is just extinguishing the fire that he's coming from.' They said, 'We're just going to be calm, we're going to sit here with him and show him that we're here to help him,'" Kara Allen says.

But their son is still behind in school due to the time he spent in isolation his first few years of school. Now that he's in a better situation, John and Kara wish the changes the district are making now had taken place earlier.

"I just wish it would have happened sooner," John Allen says. "A lot sooner." ♦

The original print version of this article was headlined "Ending Isolation"