Young Kwak photo
In a letter sent to Spokane County Sheriff Ozzie Knezovich Wednesday, June 24, dozens of Spokane organizations and hundreds of individuals called on the sheriff to cancel a training and community event with a controversial trainer.

"We, the undersigned organizations and individuals, demand you cancel the
October training you organized for Spokane County deputies, 'Mindset Bootcamp,' by
so-called 'Killology' researcher, Dave Grossman and Dave Smith," the letter states. "Further, we demand you cancel any planned 'community summit' with Grossman or Smith in Spokane."

The letter is signed by Angelique P. Sam, Carmen Pacheco Jones and Rickey "Deekon" Jones, the three people who started petitions to cancel the training that gathered thousands of signatures, as well as dozens of community organizations and hundreds of individuals.

Grossman's trainings often focus on what he's dubbed 'Killology' or the study of the psychology and physiological response when people kill, and how people can better survive traumatic situations and avoid PTSD. He tells soldiers and law enforcement officials that they should be like sheepdogs: the warriors or knights that protect the sheep from the wolves. 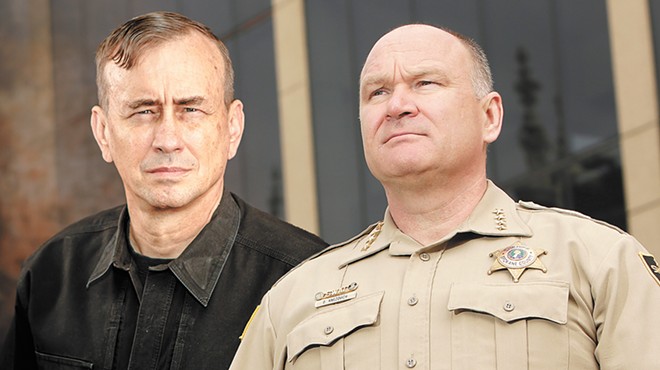 His methods and quotes that have been highlighted in articles and documentaries (which Grossman says have often been taken out of context) have caused some communities to ban his trainings and stirred concern in Spokane. Those who started the petitions to cancel a local October training with Grossman say the "warrior" mentality isn't appropriate for officers, as it primes them to see the community as a threat.

In response to community calls to cancel the training, Knezovich says he instead wants to hold a public event for people to ask their questions directly of Grossman. Knezovich says the message he took from Grossman's training in the past was not that officers should be warriors against their communities, but that they should understand the weight of their job and be prepared for the rare bad day they do have to use force.

But the community letter insists people don't need "a sales pitch" from Grossman to know they don't want his training to happen here.

"Instead, we call on you and your department to participate in a community listening
session with Spokane County Black, Indigenous, and communities of color about the
mental health impacts of policing on these communities," the letter states.

It goes on to bring up the context of the police killings of George Floyd in Minnesota and Breonna Taylor in Kentucky, which reignited protests around the country about use of police force disproportionately affecting black Americans and people of color. The letter also outlines work that's been done in Washington state to change training for law enforcement and specifically calls for discussion about the impacts of policing on communities of color even during nonviolent arrests.

"While the tragic and needless deaths of Black, Indigenous and people of color at the hands of law enforcement have been weighing heavily on our minds, nonfatal encounters with law
enforcement officers also have negative impacts on the mental health of those
community members," the letter states. "We invite you and the sheriff’s deputies to come and hear from those you serve in the community at a listening session."

Deekon Jones says he hopes that Knezovich would be open to hearing from impacted communities instead of hosting an event with Grossman.

"We wanna be heard and have the community be able to have civil conversations with the departments that are policing us," Jones says.

But Knezovich, reached by the Inlander Friday, is frustrated, calling the groups hypocrites for not wanting to have a hard conversation with Grossman.

"Well it seems that the people that claim inclusion and discussion and courageous conversations don’t want to have that now do they? They are hypocrites," Knezovich says.

When the Inlander asks if a community event with impacted groups wouldn't drive that exact type of hard conversation, Knezovich says he's "been there, done that."

"I’ve had dialogues with everybody. I’ve tried all those avenues," Knezovich says. "I’m really not in the mood for another Groundhog's Day session. The day that they want to come and actually talk about solutions and bring some solutions forward, I’m all there."

Jones agrees that nothing has changed, but says the issue is partly that not enough people in the affected communities have had a seat at the table.

"They're talking to the same people over and over and there’s been no change, so we need new voices," Jones says, "people who can have solutions and difficult conversations and change the narrative."

Jones says he's always expected his messages to be carried forward by some who are considered leaders in the black community, who often get called to that table, but that hasn't always been the case. While that's not a comfortable thing to say, enough is enough and more people should be in that new conversation, he says.

"The reason why it’s uncomfortable is some of us fear retaliation. But the thing is, the things we speak on and I’ve spoken on sound radical, but we’re not villainizing the police force. We’re saying if you want to build relationship with the community, do that. You want to work on getting bad police officers out, do that," Jones says. "We aren't saying don't police us. It sounds like Ozzie and I want the same thing, so why don’t we have this conversation?"

But on hearing Jones' thoughts, Knezovich digs in his heels, noting that he's met with Jones before and always considered him a leader in the black community as well. He mentions programs that he helped start, including one to train at-risk youth to get into the trades, and says he's been working with Spokane NAACP President Kurtis Robinson over the last year to get him arrest data that may help look for racial disparities.

"When Kurtis asked for some data, I said, 'We’re gonna do this differently than it’s been done in the past,'" Knezovich says. "I said, 'You go get whoever will do your data analysis, I’ll sit them down with my analysts, and they can pull every ounce of information that they see fit.'"

The two plan to sit down to talk about the next step in a few weeks.

But Knezovich says he's seen, similar to many types of groups (including local Republicans), there are factions within factions in local minority groups, which makes it difficult to bring everyone together for a conversation.

"There are people that don't like each other in all these groups, and it’s very hard to navigate," Knezovich says. "I’ve met with everybody, and I’m going, 'OK, are you going to pull your side together before we meet? Are you going to bury the hatchets within your own groups before we meet?"

Jones says there seem to be fundamental ideological differences that have kept community conversations from being successful. The idea of bringing in Grossman for a conversation instead of sitting down with affected communities is an example of one of those differences that will not build bridges, he says.

"The use-of-force statistics are skewed toward black people as well as indigenous and people of color, so the conversation is, let's look at the use of force locally, why it’s skewed this way, and how can we get to the root issues that all of us are suffering," Jones says. "Police relations with the black and brown communities are not good. The trust level is very minimal. The fear level is always very high."

Knezovich says he's tried to talk about breaking the cycle of violence, and how to mentor kids in at-risk situations, but that he feels there hasn't been enough support within communities once programs like the trades program got started.

"Maybe they need to fix their own damn house, and I’ll be there to help," Knezovich says. "But they have to come with solutions and they have to come not fighting each other, 'cause I’m tired of trying to play peacemaker between the factions."

When the Inlander points out that many in the community are demanding the same of police, that they "fix their own damn house" and come forward to fix bad policing, Knezovich says he tried to bring forward a bill multiple times that would have made it easier to fire police, but he didn't get the support he needed from progressive groups.

"I went to all these groups and said, 'We need help,' but we couldn't get that out of committee, so where were they?" Knezovich says. "And when we talk about the reforms necessary, it sure as hell ain't training. We got all the training in the world. Where were they? Silent is where they were. So don't tell me I've gotta fix my house. I have been fixing my house."

Knezovich says he plans to respond to the letter in writing, but did not know as of Friday when that response might be sent.