UPDATED: Spokane Veterans Home isolated residents back in February due to respiratory illness — with no way to test 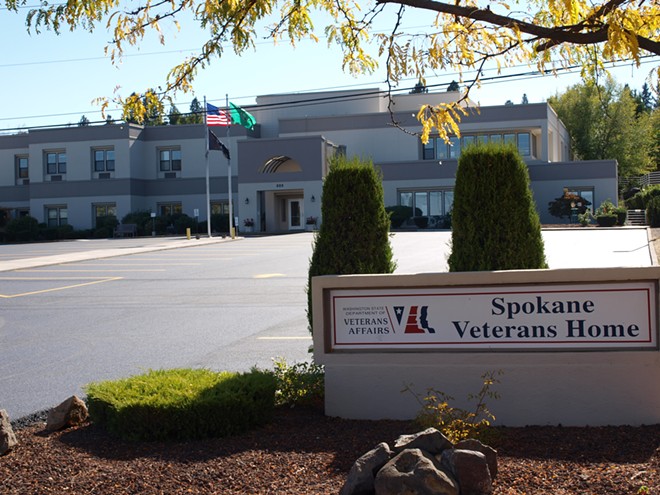 Courtesy of the Washington Department of Veterans Affairs
The Spokane Veterans Home is the largest cluster of coronavirus cases in the county.

UPDATE: The Department of Veterans Affairs announced after this article was first published that Spokane Veterans Home residents with COVID-19 would be moved to the Mann-Grandstaff VA Medical Center.


For Terry Bennett, an 86-year-old Navy veteran, the virus itself isn't the worst part.

Bennett, a resident at the Spokane Veterans Home, tested positive for COVID-19 more than a week ago, but he says he hasn't had severe symptoms.


That's because he's been mostly confined to his room — which he shares with another resident with COVID-19 — for months.

The home is now the epicenter of the local coronavirus outbreak, a facility accounting for nearly one in eight confirmed COVID-19 cases in the Spokane County. So far, 25 residents at the home have tested positive for COVID-19. Three residents are hospitalized and two others have died. Thirteen employees have also tested positive.


And all of those residents who have the virus are on the first floor where Bennett lives. There, residents are sick or restless, nurses brave risks of the job, and officials question whether — with more testing — this could have been caught months ago.

In an interview with the Inlander, Patrick McNabb, administrator of the Spokane Veterans Home, and Wendy Borton, director of nursing, say they first started seeing upper respiratory illnesses back in February. They describe how difficult it was for residents and staff to get tested two months ago.

"I do wish we did have more testing," says Borton. "If the testing had been more widely available, I think we could have gotten a handle on things a lot more quickly."

'PUNCH IN THE GUT'

It's relatively common for quarantines to occur in a facility like the Spokane Veterans home, Borton says. Once you have two cases, they consider it an outbreak, which prompts them to limit visitors, stop large gatherings and have residents stay in their rooms.

The home, with more than 80 residents, experienced one of those outbreaks in February. Residents had a cough, chills, a fever and general malaise, Borton says. But at the time, COVID-19 tests weren't widely available. The VA home was testing for the flu, but those tests kept coming back negative. Physicians could do testing if residents went to the doctor, but the residents often didn't meet the stricter guidelines that were in place two months ago. Even when the testing site opened at the Spokane County Fairgrounds in March, staff from the VA home had trouble getting tested.

"Some of the staff members were being turned away at that time," says McNabb, the Veterans Home administrator.

McNabb notes that it's only "hypothetical" at this point whether COVID-19 spread in the home as early as February, long before Spokane's first confirmed case. Kelli Hawkins, a spokeswoman for the Spokane Regional Health District, says she's not aware of any effort to trace the recent outbreak back that far.

The first confirmed COVID-19 case at the Veterans Home didn't show up until much later. On March 23, an employee with mild symptoms was tested for COVID-19. Four days later, when that employee had experienced 72 hours with no symptoms, the employee returned to work. Only then — a week after the initial test — did the employee find out it was positive.

McNabb says it was "punch in the gut."

Immediately, employees wearing masks started checking on all the residents, monitoring them every four hours for respiratory symptoms and a fever. Still, in early April, only patients with symptoms were being tested. None of the residents showed any symptoms immediately, however, and McNabb thought for a moment they were on the "cusp of being clear." But then two residents came down with symptoms, and on April 7, both tested positive.
The home consulted with a MultiCare team provided by the state Department of Health, which recommended that additional tests be done on the first floor. Five residents were symptomatic, and all those tests came back positive, according to the VA. Then 13 more residents were tested, and five of those also came back positive.

Many of those patients had no symptoms at all.


"We were really surprised because we had heard about asymptomatic carriers, but we never expected we would have the number of people in our building with zero symptoms have positive testing," Borton says.

And the building itself presented challenges. Borton says most of the rooms are double rooms, so patients typically share rooms even if they tested positive.

"We have a handful of private rooms, but we don't have enough," she says. "There wasn't enough space so that everyone could be in their own room."

On Thursday, the Department of Veterans Affairs announced that residents who tested positive will move to a COVID-19 unit at the VA Medical Center in Spokane. There, they can be isolated in "COVID-19 positive zones" and the rooms can meet "specific infection control and health care requirements. The transfer was prompted by a recent visit from a VA Medical Center team that reviewed the "environmental challenges" at the Spokane Veterans Home.

As of this week, all the residents in the home have been tested at least once, and many who tested negative are being tested again. The continuous monitoring and checks every four hours continue. But McNabb fears the the worst.

"What they do for me more than anything else," he says, "is they keep my spirits up."

"You hear about residents going on ventilators and dying of this horrible disease," he says. "To be honest, yeah, we're expecting there's going to be a lot more veterans going to the hospital." CONSTANTLY QUARANTINED


Lately, Bennett constantly hears coughing coming from the other side of the room. Only a curtain separates he and his roommate, who seems to have been hit harder by the virus.


"I never felt bad in the first place at all," Bennett tells the Inlander in a phone call. "They tested me and said I had it. But if they hadn't told me I had it, I wouldn't have known."
In the rooms down the hallway, it's a similar story: Some veterans are battling a fever and a cough while others, like Bennett, exhibit mild or no symptoms. The facility has tried to keep the veterans confined to their rooms for two months to prevent further outbreak.

The room where Bennett is stuck is big enough, he says. He has his own sink and accommodations, and there's a window where he can look out at the birds eating from the feeder, and see the bushes slowly turning green.

But mostly, he watches TV.


"Being in bed almost feels like being locked up," he says. "Time just seems to move along."

Since having a stroke, Bennett has lived in the facility for roughly a year. If everything were normal, he could go outside to look at the Koi fish. He could go to the cafeteria and the movie room, or attend the church services.

"The one thing about going to the cafeteria, you get a chance to fraternize with everybody, to talk and joke around. There would be probably 50 of us there for breakfast," he says. "I miss that."

He can't see visitors either. For a while, they could at least come and talk to him from the other side of the window. But not anymore.

McNabb notes that the home is still providing entertainment in any way they can, including Skype sessions allowing residents to talk to family members. The home has also created a way to play Bingo without everyone being in the same room.

But besides his roommate, the only people Bennett sees are the nurses and the other employees at the home. They bring him food and check on him and clean his room so it's always spotless.

Even that amount of human interaction helps.

"What they do for me more than anything else," he says, "is they keep my spirits up."


The facility has been impacted by a dozen employees missing work. But Borton says they've been able to fill in the gaps, though sometimes that means others have had to work extra. And the people caring for the patients at the home can be anxious about coming into work.

"It is a scary thing to come in and take care of people that have a viral illness that seems like it can spread very easily," Borton says. "People have fear about coming to work."

Now, at least, McNabb feels the home has the equipment to keep staff safe and the resources to get tested quickly.

But he can't help but think that things could have been different.

"If we had the processes or means we had today back two months ago," he says, "it would have been a different story."

This story has been updated.