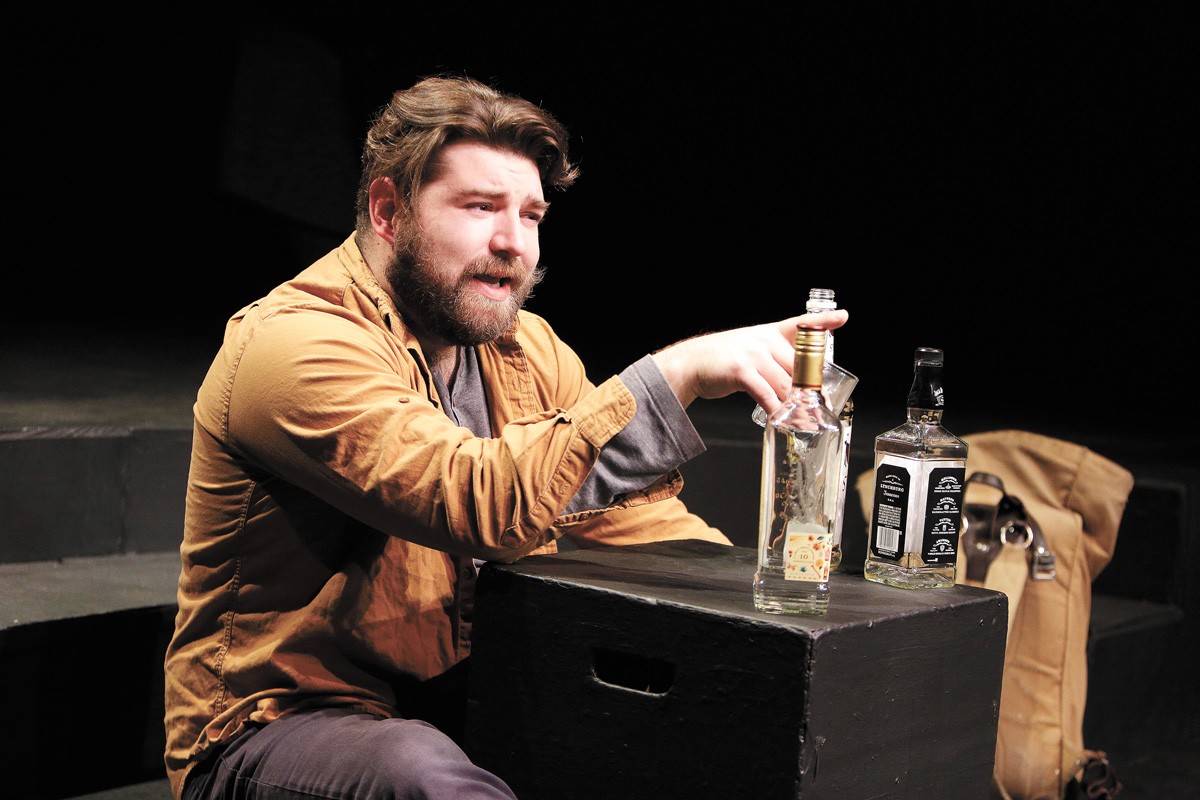 Imagine if, through twists of time and space, you were cursed to live through humanity's worst moments. Moments when men and women brutally clash on battlefields, suffer in infirmaries, die at each others' hands via swords, guns, spears and bombs.

Then imagine your lot in life is to move through the centuries telling stories of those wars, forever forced to relive those horrific clashes until humanity finally wises up and stops killing each other.

That seems like a pipe dream, I know, the ending of war. But that's the only hope for the Poet to change his life in An Iliad, a new filmed stage production arriving Friday from Spokane's Stage Left Theater. It's part of the theater's Alone Together series of prerecorded streaming productions that will run through 2021 thanks to a Spokane Arts Grant Award.

At its heart, Lisa Peterson and Denis O'Hare's play An Iliad is an epic and imaginative work of The Iliad fan fiction, and based on Robert Fagles' translation of Homer's Trojan War tale. When Peterson and O'Hare wrote their play, they were driven by their reaction to the 2003 Iraq War and searching for a way via the theater to address what it means to be a country at war. That eventually led them to The Iliad, and then to create their own character within Homer's work, the Poet.

Nearly two decades after the war that inspired its creation, and three millennia after the Trojan War, An Iliad is still, unfortunately, utterly timely. That's part of what attracted actor Robert Tombari to pitch An Iliad as a potential Stage Left show when he was poking around for one-actor shows last summer.

"I fell in love with the character of the Poet when I read it," the 28-year-old Tombari says. "He's just so different from any other character I've read before. I connect to him on some level. And this story needs to be told right now.

"There's always been war in my lifetime. I don't think we've ever known peace, really, as a country. We're always involved in proxy wars and different skirmishes from around the world."

Tombari's acting challenge is considerable. Not only is he on stage alone for 90 minutes, but he is tasked with tackling some lines delivered in Greek, slipping in and out of several characters in the Poet's stories, and propelling the show through its shifts in tone and eras. 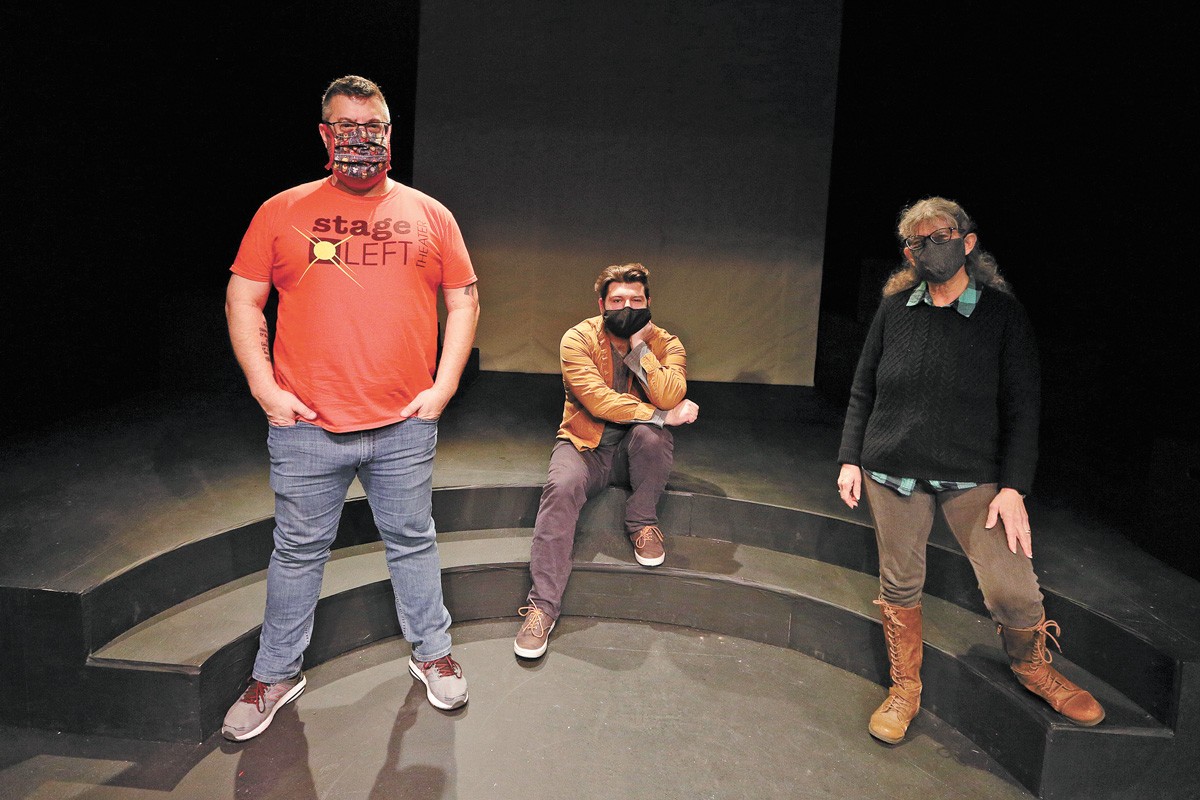 Of course, while Tombari's challenge is not dissimilar to what it would be in "normal" times, the jobs behind the scenes are taking on some new demands thanks to the virtual aspect of An Iliad's production.

For director Susan Hardie, that means thinking about cameras in place of a live audience, among other things.

"It's a play, and we're staging it as a play, but ... we're really aware that this is going to be filmed," Hardie says. "We're always keeping in mind the notion that we have three cameras available to us. Because this isn't pure theater, we have to embrace the tools we have.

"I'm directing this with a mind toward, 'Oh, wouldn't it be fascinating if the Poet just talked directly to me on my screen? If there was a moment when the Poet filled the screen with his face?' Really utilize the tools we have available that we wouldn't normally ... Rather than being restrictive [staging the show via streaming], for me, it's really opening things up to new possibilities."

One moment in the play comes to mind as ripe for a creative approach from Hardie and Stage Left videographer Paul Watts. There's a point when the Poet gets lost in his rageful thoughts and starts listing every war that occurred on Earth, starting with the Trojan War and proceeding up to and beyond the Iraq War and recent actions in Syria and Afghanistan. The playwrights made their script adaptable for adding new wars to this dramatically long recitation.

Rattling off this massive list in front of a live audience would be a stunning moment, a collective realization of just how many wars the Poet (and humanity) has witnessed. A screen on stage, and the computer screens of viewers at home, give Watts the opportunity to flash images from many of those wars, images that will drive home the horrors in a way no monologue could.

"The Poet, this is all happening in his head," Hardie explains. "He's taking this trip through these wars, through the horror, because he's lived them. That's our conceit, that he's been there on the front lines all this time. What we're hoping to convey is this sense that this man, this wanderer ... is being moved by all he has seen."

Having read the script, it's hard to imagine anyone who logs in to An Iliad not being moved right along with the Poet. There's humor along with the horrors of war, and exciting passages as the Poet unfurls the showdown between Achilles and Hector. Thankfully (to me, at least), it's not delivered via the dactylic hexameter rhythms of Homer but in a much more conversational, modern style that makes it easy for the audience.

"The Poet is talking about things like what it's like to get cut off in traffic, and how rage can take over. It's not just on the battlefield, but it's the rage within us," Hardie says. "I see war on my television set, and in the paper, and I intellectualize war ... But I totally get being cut off in traffic. I get what it does to me personally. There are many moments when the Poet brings it home like that."

Jeremy Whittington, Stage Left's managing and artistic director, was struck by the play from the moment Tombari pitched it to be part of the theater's one-person show series, Alone Together. The idea of streaming one-person shows came after Stage Left had success streaming some of its regular festivals as well as a couple of plays. Landing a SAGA grant kicked the idea into gear as part of the way the theater is "rolling with the punches" of the pandemic. Whittington notes that, thanks to that grant, An Iliad will be the first time everyone involved with a Stage Left production will be paid for their work.

For the audience, the play offers a way to experience stirring theater while supporting local artists. And with An Iliad, they have a show worth doing both.

"It's that personalization of war that is told very well through this script," Whittington says. "It's a beautiful roller-coaster of emotion. It's done with levity, and with seriousness, and with fun storytelling and tragic storytelling ... The point the Poet is trying to make for us is to help us connect so that we might learn something." ♦

The original print version of this article was headlined "War Cries"