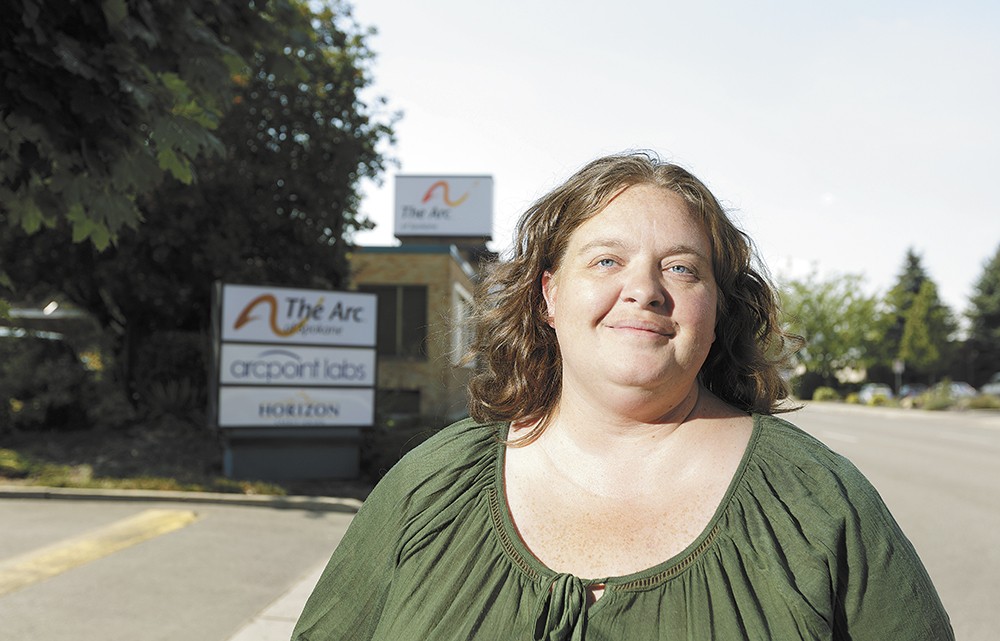 When Stephanie Boyle was 11,

she picked up a gig babysitting a little girl who was deaf, blind and had a degenerative disease that would later require her to use a wheelchair. Boyle spent time caring for the girl, getting to know her and even picking up some sign language. But that relationship came to a sad end after four years.

"When she died, I was like, 'I'm never, ever, ever doing this again' because it was horribly heartbreaking," recalls Boyle. "I decided then that I wasn't going to work with kids or people with disabilities."

But three years later, Boyle would embark on a path that made helping disabled people her life's work; she even adopted two special needs kids of her own. Since 1997, Boyle has worked for the Arc of Spokane as a direct support professional, helping people with developmental disabilities live self-directed, independent lives.

She's received national recognition for excelling at the sometimes challenging work, and has been praised for helping individuals with developmental disabilities, an often isolated population, have the chance to integrate with the broader community.

"She's just very focused on the need to recognize people with developmental disabilities as fundamentally human and deserving of every privilege, right and opportunity to thrive," says Brian Holloway, director of advocacy and family support for the Arc of Spokane. "And that's really helped us stay grounded and not lose sight of the heart of our mission."

Boyle grew up in the Spokane area

and graduated from Mead High School. After graduation she enrolled in community college to study journalism while working at Shopko, where she was praised for her ability to connect with disabled customers. Some would even seek her out, like the deaf woman who could communicate with Boyle in sign language.

She also remembers a man with developmental disabilities who would come in regularly to buy bike accessories. One day, he came in looking for a yellow bike helmet and became increasingly agitated when the store didn't have one. Security prepared to call the police, but Boyle, recognizing a communication barrier, was able to talk the man down.

After two years at Shopko she received an unexpected phone call from the Arc of Spokane asking for a donation, which got her thinking about returning to working with disabled people. She applied for a job there.

"I felt like I was fighting something I couldn't fight anymore," says Boyle, who can't quite explain why she applied for the job, which she didn't expect to get. "I don't know if it was a calling. It felt like the biggest mistake for the longest time."

Now, Boyle has spent more than half of her life working at the Arc. She's run an afterschool program and worked in supported living settings and at the community center. She's also worked on the Arc's advocacy efforts and co-founded the Inclusion Network, a volunteer group that seeks to overcome barriers between people with and without disabilities. Along the way, she even adopted two boys, 9 and 16, both with developmental disabilities.

Currently, Boyle works with adults with developmental disabilities, helping them learn life skills like how to use a microwave or manage their finances. She also helps them find meaningful activities and relationships. One of her best-known clients is Penny Cannon, who told Boyle she wanted to sell her art. Boyle says she knew nothing about art or business, but she helped connect Cannon with those who did. Now her greeting cards, framed prints, magnets and calendars can be found in approximately 30 stores in Washington state. People even recognize Cannon in public.

Last year, Boyle received the National Direct Support Professional Recognition Award from the American Network of Community Options and Resources. Boyle, uncomfortable in the spotlight, is humble about the recognition. "I don't think it takes a special person," says Boyle. "It's a willingness to know that you're wrong a lot of the time and you have a ton to learn."

Kassi Kain, a volunteer services manager at Catholic Charities who nominated Boyle for the prize, describes her as a unique individual whose work has empowered developmentally disabled people, bringing them out of isolation and into the broader community.

After all these years, Boyle appreciates how it was just a snap decision to apply to the Arc that would define her life's work.

"Sometimes I think that God has a funny sense of humor," she says. ♦

Positions: Direct support professional at the Arc of Spokane, co-founder of the Inclusion Network

I give back because... "it's what you do. It's what everyone should do on every level."

I look up to... "the many incredible co-workers, people we support and families who motivate me to not settle."

I wish that... "my job wasn't needed. I wish we had a community that was welcoming and open and willing to live life with other people."