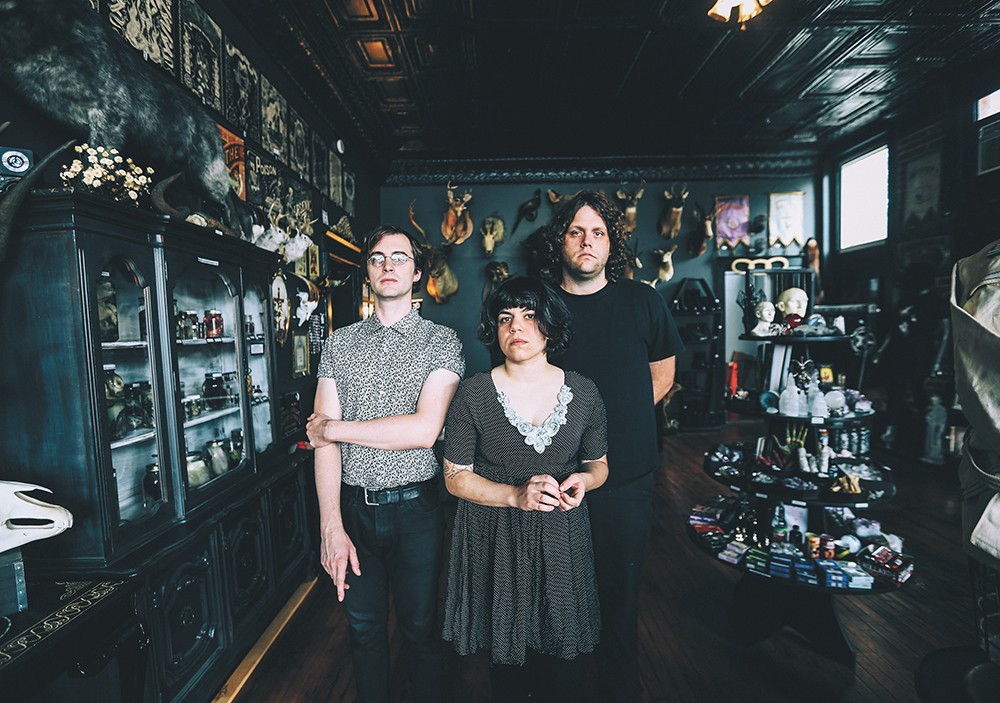 Screaming Females have been playing together for more than a decade,

and they've never settled into a traditional album-and-tour cycle. Most bands of their stature crank out an LP every couple of years, then hit the road after each one. Screaming Females, meanwhile, tour all the time, and in between full-lengths they've put out 7-inches, online singles and quick-and-dirty cassette releases.

That unpredictability is one of the New Jersey trio's many constants: It's always been the same three musicians producing uncluttered alt-rock that's as muscular as it is structurally straightforward.

"You could easily experience what it's like to be in a [new] band for six months to a year over and over again," says Screaming Females drummer Jarrett Dougherty. "You could have that experience 10 times or more in your life. We try to have long relationships with people."

The band got its start with guitarist/vocalist Marissa Paternoster and bassist King Mike, who went to the same private Catholic high school in Roselle, New Jersey. They started playing music together in an afterschool program overseen by their math teacher, jamming on songs by the Velvet Underground and Talking Heads. Dougherty, in college at the time, later met Paternoster when they were both attending Rutgers University.

"I'd given up on the idea of playing in a band, even though I'd been playing drums for years," Dougherty says. "Once she found out I played drums, she said, 'We should be in a band.' Almost instantly, we were playing together."

That was back in 2005, and they've been together ever since. Talking to Dougherty when the band was on a recent tour stop in Lawrence, Kansas, it becomes apparent that they're still driven by the inherent benefits of being in a long-term relationship.

"I think about bands like Sonic Youth or Fugazi, bands that arguably produced their best work 10 years into them being a band," Dougherty says. "I think it's something that's rare in general, and I think it's even more rare today. Less people are making a living off music, so eventually somebody's gonna wanna go find a more stable job. I feel really lucky that we've had the opportunity to continue to expand on this project.

"We've never wanted to just fall into a pattern that we rehash over and over again. We're still able to find new inspiration all the time."

The Screaming Females' sound is defined by a few things — Paternoster's mighty guitar tones, the twisty vocal hooks that recall bands like Veruca Salt and L7, an audible snarl that occasionally gives way to heartfelt midtempo songs. It's no surprise that the band has worked multiple times with engineer Steve Albini, whose work on the Pixies' Surfer Rosa and Nirvana's In Utero shaped alt-rock in the post-grunge age, and Seattle-based producer Matt Bayles, who's worked with Soundgarden and Pearl Jam.

Albini and Bayles fit comfortably into the Screaming Females' overarching narrative: They care about sonic fidelity and capturing emotional honesty on tape, and they're interested in harboring a cadre of frequent collaborators.

"It's pretty clear whether people understand the kind of level we're on," Dougherty says. "We're out here to make music that we care about, and do it in a way that's sustainable and that we have control over. ... It sounds so simple, but in a world of music where there's not a ton of money going around, the relationships people develop are fleeting. It's about, 'How quickly can this get me to the next rung?' And that's just not our style."

The Females were in Spokane most recently in 2012, when they played Mootsy's; Dougherty recalls that somebody forgot to set up a PA system, so Paternoster had to sing through a guitar amp. Hopefully, Friday night's Baby Bar show will be more together, and Dougherty says you can expect a setlist crammed with new takes on familiar Screaming Females songs.

"We've always thought about the live show as being a different thing from the recorded experience. It's kind of a spontaneous thing," Dougherty says. "We often don't know what's going to happen before we get onstage. People who expect to hear songs played the same way every time, they should probably go to a different show." ♦