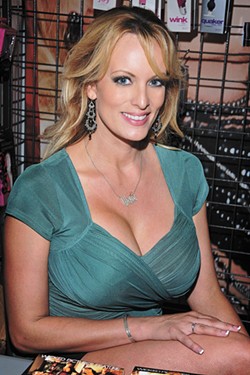 The Wall Street Journal reported last week that a lawyer for Donald Trump,

the president of our great nation, doled out $130,000 to a former adult film star named Stormy Daniels right before the election. They had had an affair, it was alleged, and Trump was buying her silence.

Most people on Twitter were laughing about the story. I, meanwhile, was wistfully reminiscing. See, Stormy Daniels and I go way back. In fact, we once worked together.

In 2008, I was a production assistant on the set of a movie called Finding Bliss, a comedy set in sunny Los Angeles and so therefore had to be filmed in the dead of winter in Spokane. As a production assistant, my job was to be there all day, every day, making sure the actors were on set and on time, to always be amenable and yet out of the way.

Stormy was only there for a day or two. I remember walking with her to the set, and her telling me how beautiful she thought the Pacific Northwest was and how she had visited once before when she was younger. I remember the Hollywood actors sitting around and listening to her stories about directing and performing in XXX-rated material, no doubt hoping the knowledge could inform their performances. And I remember being surprised when I dropped off a call sheet at her hotel and found that she was actually staying there under her nom de porn and not, as I had been told, her real name.

As for Finding Bliss, there's a reason you've never heard of it. It's a terrible film. A decade later, Stormy isn't working in movies anymore, and, well, neither am I. But like so much of Ms. Daniels' work, Finding Bliss is available for free on the Internet, uploaded in its entirety to YouTube. If you happen to watch it, be sure to stick around through the end credits, where you'll see my name scroll past. It's misspelled. ♦