Take a Book, Leave a Book

What little libraries say about the way we read and live 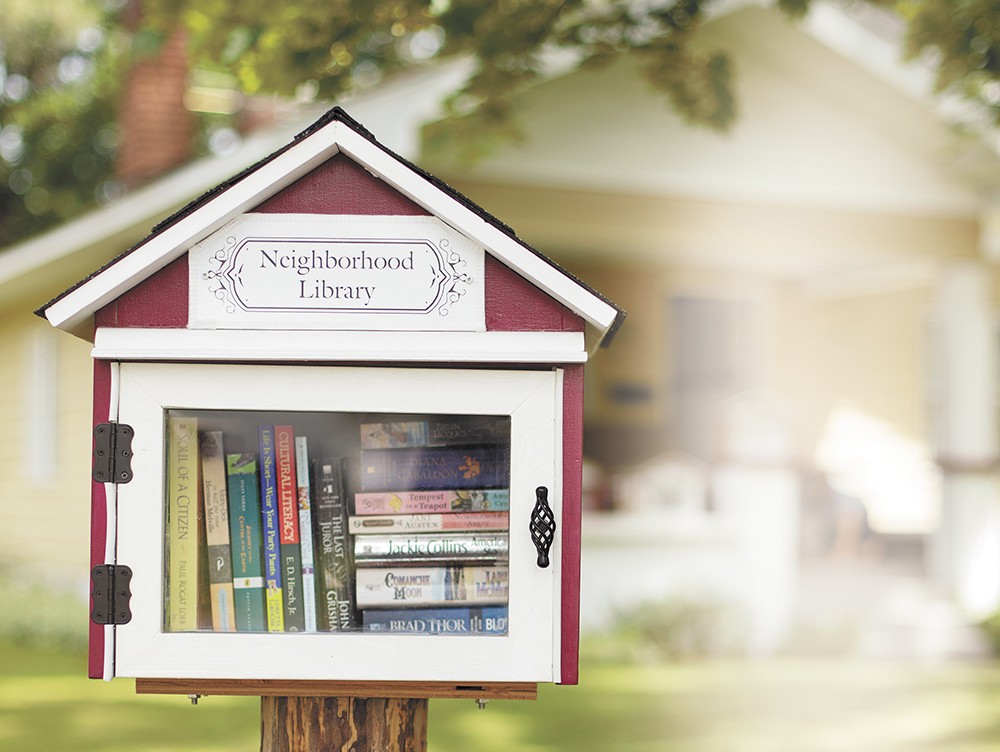 Amber Williams has a library in her front yard. It's just a little library, home to a couple of dozen books at most, perched atop a post. When she sees people looking through the books but walking away with nothing to read, she feels a little like she's let them down.

"I hate when I see someone walk away empty-handed. I want to run after them and see what they're looking for, and tell them that I can go look inside," says Williams with a laugh.

Williams, a librarian with the Spokane County Public Library system, is one of several Spokane-area residents who keep these sharing libraries in their front yards. The premise is simple: take a book or leave a book. "Always a gift, never for sale," goes the motto of Little Free Library, the nonprofit organization that maintains maps and encourages the installation of these mini book depots around the world.

As of January, the organization had registered more than 15,000 of the libraries in 62 countries. All told, Little Free Library believes some six million books will be exchanged in 2014 through these little book huts.

Williams, a book hoarder, quickly admits as much. Her little library, standing in her yard near Manito Park for almost two years, was meant to be a way of thinning out her collection. That didn't happen.

"I have thousands and thousands of books. I sold this to my husband as a healthy way to deal with my hoarding. 'I'll give books away,' I thought," says Williams. "Other people keep putting their books in the library, so I'm not getting rid of anything."

There are people in Jan Hansen's neighborhood she'd never met until she put up a little library in the front yard of her northwest Spokane home just a month ago.

"We've lived here forever, but we've never talked before. Now everyone stops and talks. There's a curb appeal factor to it," says Hansen, who along with her sister, Dianne Talbott, has begun making little libraries to sell through their fledgling business, Little Library Builder of Spokane.

The Little Free Library website sells models beginning at about $350 and topping out near $1,000, but Hansen is starting her prices at about $200. The goal is to give people a library to either match the design of the house in front of which it will stand, or fit a requested theme and do it at an affordable price.

Hansen, a retired paralegal, made her first little library (along with help from her partner, Tom Roach), as a gift for a friend and says it's common for the miniature structures to be given as housewarming presents. It's all free, so there's no material return on your investment, but Hansen says that doesn't mean you don't get rewarded in the process. Just last week, she checked the little library to find two notes:

Thanks for the library, Love Emily.

Thanks for making this little library! I like the book Upchuck and the Rotten Willy! Love Margo.

You'll find them here in Spokane, whether plotted on immaculate South Hill lawns or in a field off of Sprague Avenue, the site of a proposed county library. They're unassuming little things, easily mistaken for a birdhouse by the uninitiated and varying in design and contents, other than the seeming ubiquity of Twilight.

There's a fuzzy warmness to this movement, but also a practicality. A little library in a place far from an actual library or much cultural exposure can be a vital tool, which is part of the reason former public school teacher and social entrepreneur Todd Bol began the Little Free Library program. LFL's board of directors says that nonprofit organizations like 4-H Clubs, Rotary Clubs and Boy Scouts have erected little libraries in rural areas to help increase access to books as a way of promoting literacy. 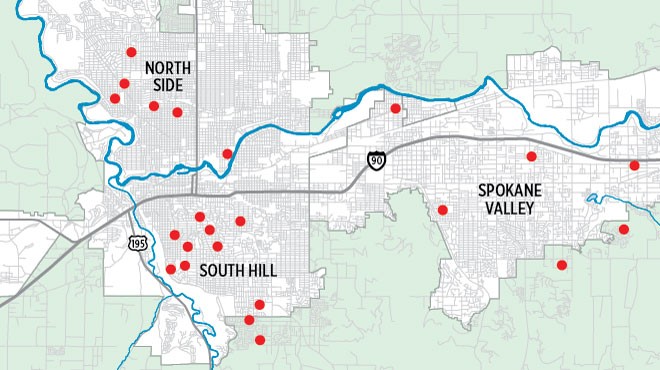 "There are more and more neighborhoods where books aren't as easy to get to," says Sheri Boggs, a former Inlander staffer, who has a little library in her yard on the South Hill. Like Williams, she (as well as her boyfriend) is a librarian by trade. "I see little libraries as being an outgrowth for someone's passion for books and something to further literacy."

The Little Free Library site asks those with libraries at their homes to register them on the site, making for a useful directory to the country's more than 2,500 little libraries.

Boggs has never had to worry too much about restocking her library. That seems to happen naturally as families stop by on bikes or on foot, selecting something to read, but more often adding to the stock of reading materials. Still, Boggs does a little curating for her little library, just to keep things fresh.

"I like to put something out there that people wouldn't expect, and it's good to put out an obvious YA novel," says Boggs.

The weirdest thing that's arrived in there? A bunch of AA literature. Boggs didn't know what to make of that. Williams had someone drop off a tongue-in-cheek self-help manual for book addicts and couldn't help but think it was aimed at her. Kids books, far and away, go the quickest. Sometimes Williams heads to the thrift store to keep her miniature library full of books for the little ones.

Part of the reason Boggs puts in the work to keeps the library at her house is the simple joy of sitting in her home office and watching people take out books.

"There's something almost romantic about it," says Boggs. "There's an element of tactile discovery." ♦

Find a directory of little libraries at littlefreelibrary.org • For information on Little Library Builder of Spokane, contact littlelibrarybuilder@gmail.com