The freshman from Las Vegas loves Green Day, while his teammates say Logic is more his jam 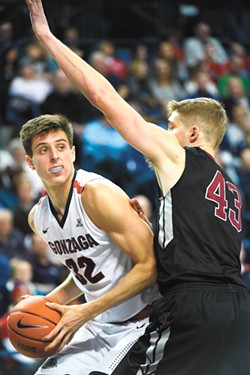 What's your favorite artist to listen to, pregame?

I'm all over the place, to be honest. I'd say my go-to would probably be Drake. My favorite band if I wanna get mean and get aggressive is probably Green Day or Disturbed. I'm a big-time Green Day guy.

Which guy on the team do you see becoming a head coach someday?

Probably Nigel [Williams-Goss]. He's really smart on the court, and he already knows how to lead pretty well.

Nigel went with Josh [Perkins]; how do you feel about that pick?

Who's the funniest guy on the team?

Josh Perkins. He can do this thing with his face and make these weird noises. I could be 0-for-20 with five turnovers, have the worst game ever. If he does that, I'm in tears, it's the funniest thing ever.