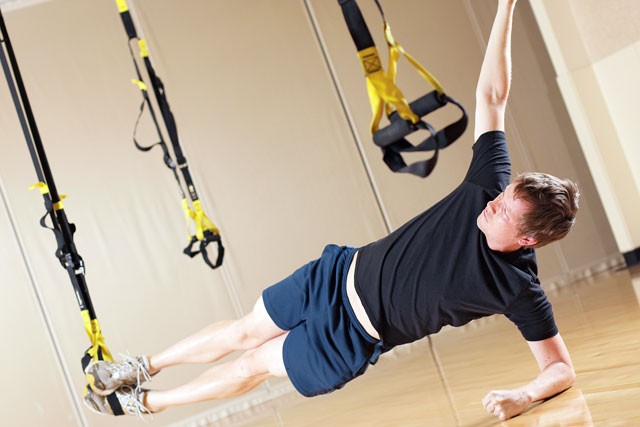 Young Kwak
Once you sort out which straps go where, the TRX workout can do the job.

I’m not an idiot. Can we just agree on that? I’m not stupid. I originally set out to play around with various home exercise trends — the Perfect Pull-up, TRX — all those things you learn about in 30-minute intervals when you’re up far too late at night.

In addition to the efficacy of the equipment, I wanted to test my willpower and abilities as a self-starter (traditionally not high). I started off with the Perfect Pull-up, and it was actually pretty great for what it was — a quick setup for strengthening the arms and back.

TRX, though, was different. I consider it to be on the low end of that scale that includes P90X, BeachBody Insanity and other programs whose infomercials feature impossibly ripped men telling you how bad you’ll want to quit when you’re using their system. (It’s actually a brilliant marketing scheme for a generation who grew up playing Call of Duty and thus assumes it has what it takes to be a world-class badass.)

TRX was developed by a Navy Seal — who has transitioned nicely to a smiley, chisel-jawed CEO — to help his men stay super, super cut in war zones or whatever. My basement looks like a war zone, and, somewhere deep in a part of myself I’d never normally admit to having, I want to be super, super cut.

So it seemed like a natural fit. The only problem: There’s nothing at all natural about TRX. Perhaps symbolic of its birth in urban war zones, the thing seems simple but is surprisingly unintuitive. It is made up of thick, adjustable — though inelastic — nylon bands and handles and foot hooks, suspended from the ceiling or from a doorway. Using this strap and your body weight, positioned in a number of absolutely absurd angles, you’re supposed to be able to train like they do in Kabul or Anbar province. Deadly places.

I signed up for a class with Nicole Manus, the head TRX trainer at the Central Spokane YMCA. She proceeded to murder me. I can’t remember ever being so sore. I took a few more classes from various trainers, wondering if the results were repeatable.

They were, more or less. Complete head-to-toe soreness and general exhaustion. I continued using the TRX at home off and on as well. My workouts there got better, but still weren’t quite of the intensity in a group class environment.

Of course, at home, I could TRX in my underwear. Trade-offs.

That got me interested in keeping track of the relative merits of using the same device under different conditions, at home or at the gym. This is what I came up with.

GYM: You’ll get a better workout.
HOME: It’s easier to get to your basement than it is to get uptown.
HOME: You won’t be totally outclassed. (Don’t underestimate the negative effect of someone considerably stronger than you busting out a million reps while you struggle with one)
GYM: You’ll probably find at least one person in worse shape than you are. (Don’t underestimate the power of outworking someone old enough to be your grandmother.)
HOME: You can go at your own pace.
GYM: Do you really want to go at your own pace?
GYM: You’ll get an incredible workout.
HOME: You’ll be able to walk the next day.

The upshot is this: There’s no question being in the company of Manus and the other trainers made it much easier to learn the moves. But it’s honestly a pain to remember to register for a class the day before and actually arrange your schedule to get there.

TRX is a full-body workout, and surprisingly low impact (good for my old-man back). I think, as I get better at it, I’ll need the gym classes less but want them more. My competitive drive kicks in and I really want to blow people out of the water. Which is why I physically am unable to walk right now.

Ultimately, mixing home workouts (for when I need to get one in but don’t have the time or energy) with gym classes (for when I’m feeling masochistic) will be a really nice way to pull off a rigorous regimen while still having time for work and proper eating and my friends and everything.