The two littlest residents of Cat Tales in Mead made their public debuts a month ago, and continue to steal visitors' hearts. Kachina is a three-month-old North American cougar who came to the nonprofit sanctuary with her pal Sibella, a five-month Canadian lynx, from a Montana facility. Both kittens are on display daily; Sibella in her indoor nursery and Kachina in an outdoor play area. See both kittens and all their friends this weekend during the annual Boo at the Zoo celebration, Oct. 27-28 from 10 am-4 pm, when all Cat Tales' animals enjoy special meat-filled pumpkin treats. Details at cattales.org. (CHEY SCOTT)

Some noteworthy new music arrives online and in stores Oct. 26. To wit:

John Legend, A Legendary Christmas. 'Tis the season for a cash grab. 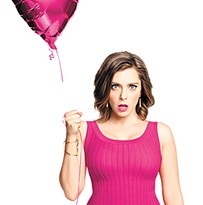 Crazy-Ex Girlfriend, the CW musical comedy, has entered its final season. Yes, there's plot. And yes, there are jokes. But most of all, there are a lot of silly songs, which is what pushes the series from "likeable" to "brilliant." Two episodes into its final season, there have already been several new standout songs. Our favorite? "Time to Seize the Day," a frantic patter song about how anxiety thwarts our carpe diem ambitions before we can even leave the house. (DANIEL WALTERS)

HBO's new documentary Jane Fonda in Five Acts is a fascinating look at a life that probably warrants more than the two hours dedicated to it here. Director Susan Lacy structures her "acts" around Fonda's relationships with her father, three husbands, and finally her life as an older, single woman. While the interviews with Fonda reveal her to be the thoughtful feminist and activist you'd probably expect, they also uncover a life full of self-doubt you wouldn't know from her fiery exterior. (DAN NAILEN)

I stumbled across the mindblowing Instagram feed of domestic Renaissance woman Christine McConnell several years ago and was immediately captivated by her spooky edible creations: Alien facehugger cakes, haunted gingerbread mansions and more. Since gaining widespread attention, McConnell also landed her own horrifically delightful Netflix series, The Curious Creations of Christine McConnell. The show peels back the curtain on McConnell's baking prowess and brings along some silly darkness in the form of three ghastly puppet "friends" — a garbage truck-mangled raccoon, a sassy reanimated cat mummy and a gruff, misunderstood werewolf. (CHEY SCOTT)