GET AN EYEFUL
Local artist Reinaldo Gil Zambrano recently put the finishing touches on a mural outside Feast World Kitchen, its imagery a combination of urban cool and, fittingly, food! Do yourself a favor and give it a little drive-by at 1321 W. Third Ave. Better yet, order up some food from the internationally oriented incubator kitchen, and check out the mural while you pick up some delicious dinner. (DAN NAILEN)

S.W.A.T.'S PROTEST-PACKED PRESENT
When anti-police brutality protests rose up this summer, most TV cop shows kept silent. But S.W.A.T. showrunner Aaron Rahsaan Thomas — a Black man — was an exception, giving interviews to everyone from the Hollywood Reporter to the Inlander. Back for its fourth season, we can now see the results of Thomas's introspection, as the show amps up the internal "Black versus blue" tension of Hondo, its African-American police officer main character. The first episode ends with Hondo and his son and his father all kneeling in front of a mural of George Floyd and other minorities killed by the police. S.W.A.T. has to deal with the real-world coronavirus this season, too. And there are, of course, unrealistic aspects: For example, on this show, the police officers often wear masks. (DANIEL WALTERS)

LEND A HAND
EWU'S Get Lit! literary festival is one of the cultural highlights of Spokane life, and you can help them pull off their online version in 2021. It involves you scoring some killer reads courtesy of faculty, grad students and alums of the school's writing program. For $20, you'll get at least three books, as well as some literary magazines. Visit facebook.com/EWUGetLitPrograms and hit the link to the sale, or drop by Feast World Kitchen Saturday afternoon and buy in person. (DAN NAILEN)

QUITE THE CELEBRATION
The Spokane Symphony has been stuck in silence since March and postponed its entire 2020-21 season due to the pandemic, but the organization's hopes for coming back strong got a boost with its recent gala. The online event included performances by symphony musicians, a look at the future from Music Director James Lowe beaming in from the United Kingdom, and ultimately raised more than $165,000. You can still donate to keep the music coming at spokanesymphony.org. (DAN NAILEN) 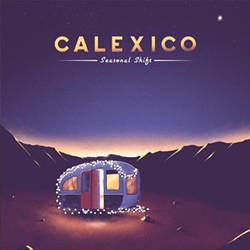 THIS WEEK'S PLAYLIST
Some noteworthy new music hits online and in stores Dec. 4. To wit:

ARCTIC MONKEYS, Live at Royal Albert Hall. 'Tis the season of live albums, and all proceeds from this 20-song set go to the War Child charity.

CALEXICO, Seasonal Shift. Calexico is one of the few bands I'd get excited about releasing a holiday album, thanks to their multicultural sonic approach.