GONE GIRL
I'm usually a year or two behind when it comes to TV, so it's fitting that I'm just now catching up with Search Party, a truly eccentric mystery sitcom that debuted in 2016. It starts off in satirical mode as a quartet of self-absorbed millennials, led by Arrested Development's Alia Shawkat, hunts for their missing college classmate, but it has mutated over the course of its four seasons into a Hitchcockian paranoid thriller, a twisty courtroom drama and an intense psychological study. In all modes, though, it's always compulsively watchable, punctuating its serious questions about trauma, media scrutiny and sociopathy with big, broad comedy. The entire series, including its 2021 season, is streaming on HBO Max. (NATHAN WEINBENDER)

NOT SO SCARY
Stage Fright will never rank higher than being the Band's third-best album after Music From Big Pink and their self-titled set. But a new 50th anniversary special edition makes an emphatic case for it being close to those two classics. It's home to some of their best songs ("The Shape I'm In," "Time to Kill"), and this reissue really puts a spotlight on their vocals. Guitarist Robbie Robertson rejiggered the tracklist to what it was originally "supposed" to be, and it flows really well. Best of all, this set includes a brilliant previously unreleased live set recorded at the Royal Albert Hall in 1971, a show that includes basically everything you'd want to hear from their first three albums. That set (included on both tCD and Blu-Ray here) is worth the price of the new Stage Fright by itself. (DAN NAILEN)

FANTASTIC FOLKLORE
Those who enjoyed the breathtaking 2009 indie animation The Secret of Kells will be elated to discover the latest installment from its two creators. Wolfwalkers on Apple TV+ is the third (unrelated, plot-wise) installment of the duo's Irish folklore trilogy, along with 2014's Song of the Sea. Wolfwalkers is a heartwarming story of friendship, trust and magic. Robyn, whose father has been sent to eliminate a wolf pack in rural, 1650s Ireland, befriends Mebh, a wild girl of the forest who transforms into a wolf while she sleeps. The film's wood-block inspired art style and voice acting are top notch. (CHEY SCOTT)

UNWORTHY WINNER
You might be tempted to fire up Netflix and delve into I Care A Lot after Rosamund Pike won a Golden Globe for her role as a shady court-appointed guardian who bilks old folks out of their money. Let me save you two hours. I love dark comedy and vicious satire, and this flick purports to be a takedown of for-profit elder care and American health care. Those areas are certainly ripe for the right movie, but you'd be hard-pressed to find many laughs in this inept bit of storytelling. (DAN NAILEN) 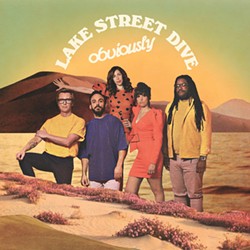 VALERIE JUNE, The Moon and Stars: Prescriptions for Dreamers. Go listen to "Call Me A Fool" and give up all resistance to her soulful charms.