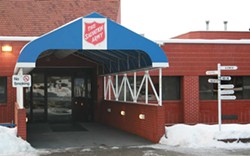 The city announced today that it was recommending the Salvation Army as the operator of a proposed new shelter today, and a contract between the organization and the city will be forwarded to City Council sometime soon.

"A new shelter is a key part of our work to build a system with sustainable, strategic investments region-wide that will provide consistent levels of service," says Kelly Keenan, the city's director of Community Housing and Human Services, in a statement.

The choice already has the support of at least one member of the council, City Council President Ben Stuckart. Stuckart was a part of a review committee that included representatives from the Spokane regional Continuum of Care Board and elected officials from the county, city of Spokane Valley and city staff. That committee looked at the applications to operate the shelter space, and Stuckart says he and the rest of the group came away convinced that the Salvation Army was the best choice.

Particularly, Stuckart says the Salvation Army outlined how they would provide case management for addiction and mental health services at the shelter.

Stuckart says he was initially concerned about the Salvation Army's stance regarding LGBTQ people. The Salvation Army is a Christian organization that's been criticized for its historical opposition to same-sex marriage. But he says those concerns were addressed in the review committee's meeting. Any contract that the city negotiates with the Salvation Army will include language to ensure that there are no discriminatory practices.

"I came into the meeting with them not being my first choice," Stuckart says. "After two hours, it was."

In order to receive government funding, the operator must provide a low-barrier shelter that allows anyone to stay there in any condition. That means the shelter won't be able to turn people away because they're not sober, like Union Gospel Mission does. And it won't be able to force anyone to go through any religious services in order to access the shelter.

The city sent out a request for proposals in June. The city says it evaluated the experience of the organization in providing services to those experiencing homelessness, experience working alongside Spokane police and fire, the ability to partner with the city CHHS department, and the ability to meet all the conditions and requirements if designated an emergency shelter operator.

But even if City Council does approve the Salvation Army as the operator of the shelter, there's a ways to go before it becomes a reality. Since the City Council approved the purchase of a piece of land on East Sprague to become the location of the new shelter, which would have a capacity for up to 120 people, there's been significant backlash from neighbors and Project ID, an organization for those with disabilities that's located on the property. The deal has yet to be finalized.

Stuckart says he believes "we can deal with" the concerns regarding transportation and security at the East Sprague location. The city, however, planned to split the cost of the $1.8 million property with Spokane County, and Stuckart says that conversation is ongoing.

"We're nowhere close to signing the deal on it because some rough patches have been hit with funding," Stuckart says.