The Cost of Speaking Out is Still Small by Comparison

was asked to write about my #MeToo experience and the events that occurred after I told my story (first reported publicly in the Inlander last month). My story wasn't particularly unique. Legions of women have been intimidated and sexually harassed by seemingly powerful men. What I found interesting was the conflicting predictions from onlookers. On one hand, I had close friends and mentors telling me to be as vague as possible, that naming names would damage my career. I was literally shown stories about women who were blackballed for doing what I was about to do. At the same time, people in the community were suggesting that I was simply telling my story as a political stunt or for personal gain. They suggested that coming forward would advance some sort of personal agenda. In my mind one prediction had to be true, the other false. I didn't believe that both outcomes could exist in the same universe. Or could they?
click to enlarge 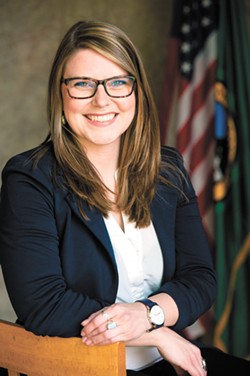 Kate Burke, running to represent northeast Spokane on the city council, handily beat her opponent in November and will be sworn into office next week.

There are folks who won't talk to me now because of that story. I have now been elected into office and there are progressive people who wish I hadn't. There are people who are hesitant to simply meet with me now. I mostly attribute this dynamic change to the age-old fight between morality and expediency. But there will be more on that later — those people aren't even the greatest challenge.

Believe it or not, it was the stories. I have gotten dozens of calls, emails and messages. I have heard horrific stories from women (and men) in our community who do not think this system works. Women who have undergone substantial trauma and are seeking justice or simply wanting to get their dignity back. Some have reached out to different institutions for answers, only to be met with a labyrinth of bureaucratic pitfalls, complicated procedures and victim blaming.

These women probably have little idea what effect they have had on me. Not only have they provided a sense of validation, but I've also been forced to look deeper into my past and allow some things to resurface that have for too long gone unaddressed. I realize that I have more work to do in understanding my past and be aware of its role in my present and future.

Years ago, my dad told me that virginity (and sex) was something you gave to someone. I don't think he fully realized that it was something that can just as easily be taken. It's easy to say that rape is bad. Nobody wants our sisters, daughters and mothers to go through anything that tragic. The thing men have failed to grasp is just how ubiquitous the threat of rape, assault and harassment is to the experience of simply being a woman.

But society is undergoing a reawakening. We are dismantling rape culture. We are breaking down complicity, male toxicity and the expectations of secrecy. These ingredients serve as the stew in which rape culture thrives. In many cases applying a bit of sunlight causes it to wilt away. But we must continue to pressure and focus on actual action and accountability if we wish to be truly liberated. I consider myself lucky to be a small a part of this transformation.

Yes, I have experienced some inconveniences as a result of telling my story. But they pale in comparison to the travesties the women I've met had to endure. It is their faces I remember and their stories I carry with me as I speak out against misogyny and patriarchy. So, to those who believe everything I've done — starting with telling my story and from that point — was simply a means to an end: You now know my "agenda." And let me assure you, I will use every ounce of capital within my means to reach that end. ♦