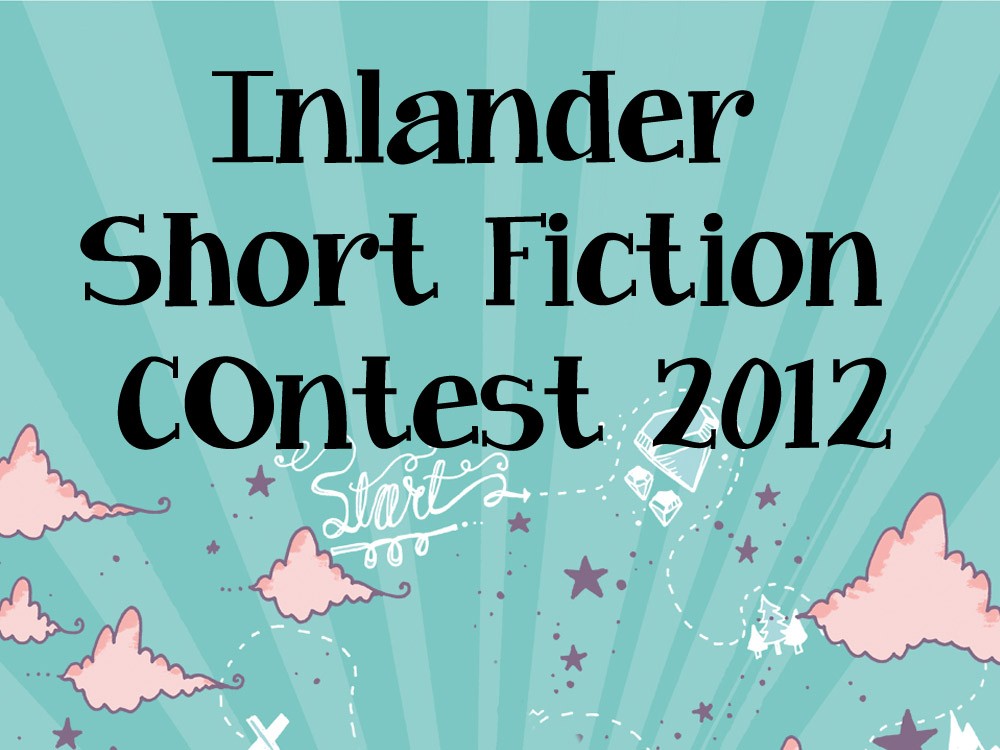 The End Again
By Rick Boal

Mummy told me "there have been end-of-days predictions for centuries, all of them fueled with fervent religiosity", whatever the cred that means. Historical texting says everything changed in '32 during the PRofChinaCorp® (PRCC) takeover, when all organized faith was banned. Over 16mil died n 6wks and it was the beginning of The EndTM.

CapitalismOne, Inc.® polled the CloudnetTM and "discovered that 83.4% of us believe the world is destined to end soon. And we are willing to pay for the experience."©

That xplains the xplosion of players n the GodWars!® RPGs, where fanatics, for $16k a cycle, can battle the Chosen Ones of other faiths, blast them into oblivion & claim the holy high ground. Rumorsites claim the CloudnetTM deaths actually happen n the hardwired world.

The EndTM has been a huge boon 4 cloudchatter link sales, weapons transacts, concerts & dating sites. It's the single best thing that has ever happened 4 legal firms. Every1 wants 2 blame /i.e., sue/ some1 else 4 the disasters of their lives. That's why Mummy enrolled me at her alma mater, HarvardUCorpTM, b4 I was born / 20yrs ago / the moment she was positive the donor sperm took & I was fem.

Mummy luvs me. She bought me an olfactory nerve graft on my 3rd b'day 2 mute my sense of smell & ensure I could endure the decay of life outside our bunker complex.

2nite is the 28th The EndTM "once-in-a-lifetime event celebration". I guess the other 27 don't count. Maybe tonight is the big xclamation mark at the end of humanity's sentence. Other "events" sprang from lvl-14 twisters, swollen oceans swallowing major cities, the SoCal island-forming quake, countries engulfed by firestorms or ice, the Now-Dead Sea spill, & viagra-induced mass sterility.

The Israeli-Iran 6sec War, 4decs ago, triggered the 1st The EndTM event, spurring sales of solar cars & iodine bath spas. 1yr later, DuPonsanto® released a GMOd refined whitesugar seed that wiped out every remaining bird on earth, which marketers spun as The EndTM II: The Sequel.

The birdageddon generated billions n research and trillions n sales of Clonimals®, this time using DNA of xtinct birds & bees. DupansantoTM created the crisis & then made record profits from it. They trademarked the lifeform Miracle Breez҉TM & sold it through AmDist®, a wholly-owned direct sales subsidiary.

PfizerLilly® came up w/the 1st anti-venom vaccine for Miracle Breez҉TM stings / Breez Away͌TM / after 4 million livestock & farm workers, immigrants from the U.S., were killed. Seems the breez were released 2 pollinate UofSouthAm® fields & nailed everything that moved. I had the vac-series when I was a baby, but the bass buzz of a nesting hive still gives me nightmares.

I spent 5hrs packed tight w/Enders n travelcubes on subrail transport 2 get here 2day, then another 3hrs cued-up at the Rothschild ArenaTM "Because Biggest Is Best"©. I am so ready for a weekend of partying!

"$75k‽The last 1 was only $30k! What a jeezin' scam! Do the morons think they're selling the real End this time‽

The surging crowd is impatiently pushing, throwing me off balance & n2 the 300lb SecuriTech. I'm sure my 12" yellow traMpTM stiletto heels aren't helping. The SecuriTech roughly grabs my arm & keeps me from falling. He doesn't care if I get trampled & die, he just wants the scan. My Valtino BeautyshieldTM plasti-mask rubs against the thrashed green glowhairs of his gnarly beard. I glare.

The scuzzin' Mofu better not scratch the finish! It took me an hour to spray it just-so. Why the scrod do these freakoids go 2 sears-mart® for crappy hair lightfusions when they can get the plush version at Starstruck Salons® 4 just another $600? It even comes with a complimentary BullspressoTM!

The Lvl-5 scuzbag twists my wrist up & scans my embed CourtesyChipSM with his implanted palm reader be4 the crowd pushes me beyond his reach. I barely hear the ping! of authorization thru the shouting & explosive music streaming from the arena. He releases my arm & I'm pitched towards the entrance by the mob.

The glidewalk moves me thru the security archway. My weaponless, nude body screens pink for a nano- sec on the Securatron® screen. I jostle past slack-jawed teen jukies, manic Rippers, recycled Punk pukes & gorgeous Affluents like myself. I side-step n front of a concrete column 4 a moment of shelter from the rush.

The glowhaired masses stream by on either side of me, rivers of neon streaking n2 the enormous, dim cavern. I pull a Valtino BeautyPackTM out of my GuccaniTM purse, flick the mirror app and check the BeautyshieldTM 4 any deformities. None show, thank cred. I look purrfect.

Blue hair, the color of extinct robins eggs, luxuriously floats around my head, foamy cloudlet highlights woven thru the strands like a perfect Kauai sky. The anti-grav style, expensively exclusive & unattainable for sub-class twinkies, displays the arched curves of my ears & a dozen sparkly NoFakin'!TM self- pleasuring ear studs. I rub 1 of the studs 4 a quick tingle.

I put the VBPTM back & remove a filtered Sexpot!TM doob from its case. I place it between my polished white lips & inhale. The self-lighting tip glows orange as the soothing cannabinoid mist rushes n2 my lungs & pulses instantly thru my bloodstream... calming... me... just 1 more hit...

The jangle of decibels blur harmoniously as the throngs around me melt n2 an intimate mist. I luuuv filtered doobs!

I softly hum the Sexpot!TM la-la-de theme, "For a Friendlier World"©, & grin wickedly, then gently finger my lobe. I bite my lower lip, shiver then sigh. 4.3sec. I take a last satisfied drag & dbl-blink to activate my WindowsTM contact lens. Winking thru the various apps, I open my OurspaceTM screen & locate Paralinda. She's already inside near the front, bathing n the sounds.

"Trelisa!" she squeals n2 my earpod. "It's 'bout time u got here, slut! You'll never guess who I have n my hand," she giggles.

She squints 2 activate her p.o.v. sub-app, so I can see where her Windows® lens is aiming, & Paralinda turns 2 face Jax, my old para. I haven't seen him n a yr, since The EndTM: Maldova-Ukraine Meltdown last spring. Now that was a fritzin' show!

My stomach flutters & I almost wish I hadn't signed off with him, but what was the point in staying together when the world kept revolving? We connected at a RAVE!!!TM fight concert during The EndTM: United IndiPaki Genocide Marathon so it felt full circuit 4 us to sign off at the next event. Still... seeing Jax makes me want him 2 fondle my lobes.

Shiz, these things are addicting! I really need 2 buy the BottomsUp!TM combo stud-pack next paycycle.

Jax is oblivious 2 Paralinda, her hand, or anything else except the rhythmic beat booming thru the stadium, shuffling his cells like popcorn n a micro. His glassy cobalt irises reflect the stage lights.

Paralinda squeals, "C'mon! The BeatlesTM holos r about 2 phase on! I saved u a hover-chair!”Like I want a Revolution©. What I need is a drink if I'm going 2 face Jax again.

"I'll glide by after I stop at the bar & get a little intox," I tell her, then dbl-blink 2 exit. She's fun at events & is a great kisser, but I hate her the rest of the time. She's a Lvl-3 para-legal asst at my firm & fritzed- up 3 (‽) of my briefs this wk. Again. This a.m. I arranged 2 have the bi'tch demoted & transferred 2 a parking level workcube on Mon.

But 2night we'll party with the 100k here, everyone bobbing their heads 2 the beat. 10bil other people n cities & ghettos around the globe have tuned n 2 participate, anticipating a climactic finale.

Mummy's also here 2night. Her Level-1 Superior at the firm invited us 2 join her & both of her wives in their private V.I.P. boudoir booth. Sex with other women is so yesterday / literally / but grinding away with Mummy there? Gross! I passed & didn't plan 2 see her again til Sun. 'Course, I might not get back home til then, either.

I glance down at my purple lace bustier & adjust the straps 2 raise my Permafirms® another 10°. / 16th b'day gift, thanx Mummy!/ I smooth my Nearlyvisible FlirtskirtTM, a new repliscan I bought from TheGapSiteTM. It shimmers over my canary thong, complementing the stilettos. I step n2 the stoned fog, ready for The EndTM.

I look 4 the familiar red laser display & spot 1 on the balcony. I wedge thru the crowd & step on2 the escavator that spirals me up 2 the bar. I order a shot of tequila w/absinthe chaser from the intox droid. I look around & suddenly scowl.

A genbend hermaphro / bald with a goatee, a vulgar 20thcentury style f-up / is on the balcony. S/he is looking down on the revelers, wearing my outfit! I mean, not exactly identical. S/his matching pumps & panties r iridescent emerald green. That part actually looks good, but it's still my look! I want 2 pitch her/m over the railing, the frizzin’bastich!

The droid appears w/my drinks, scans my wrist, then de-materializes. I toss back the tequila, quickly followed by the green syrup, & lean on the bar, eyes closed, frantically rubbing both of my ears until the heat of the intox does its job. 3-2-1-Zeroooohhh...

I laugh out loud at the truth of it & am ready 2 join Paralinda & Jax. It takes a 1⁄hr 2 squeeze thru the crush of writhing bodies that blend into 1 pulsating mass. They all feel sooo good pressing against me, like swimming n warm pudding. I feel f.i.n.e.

50ft high BeatlesTM holos r into their 3rd song. The crowd is swaying to "Lucy in the Sky (With Diamonds)"© when I reach Jax & drape myself over his back. Mmmmm... life is good.....

He turns around & looks right thru me, eyes flashing like a winning Vegas app. He has no idea who I am, but I bet he doesn’t know who he is right now, either. S’cool, I don’t care. He lets me wrap my arms around his hard, sweaty body & we live n the songs, hugging each other, smiling w/enthusiasm! We both start crying & that makes me laugh. I want him so bad.

The Fab holos r harmonizing their final song when the ground shakes.

Concrete dust rains on us.

I clutch Jax even tighter.

Then everything goes bla-

Just 10 days left in 2014 Short Fiction Contest, so send us your stories