The Good Times Are Killing Me

The night Modest Mouse sent me down the wrong road 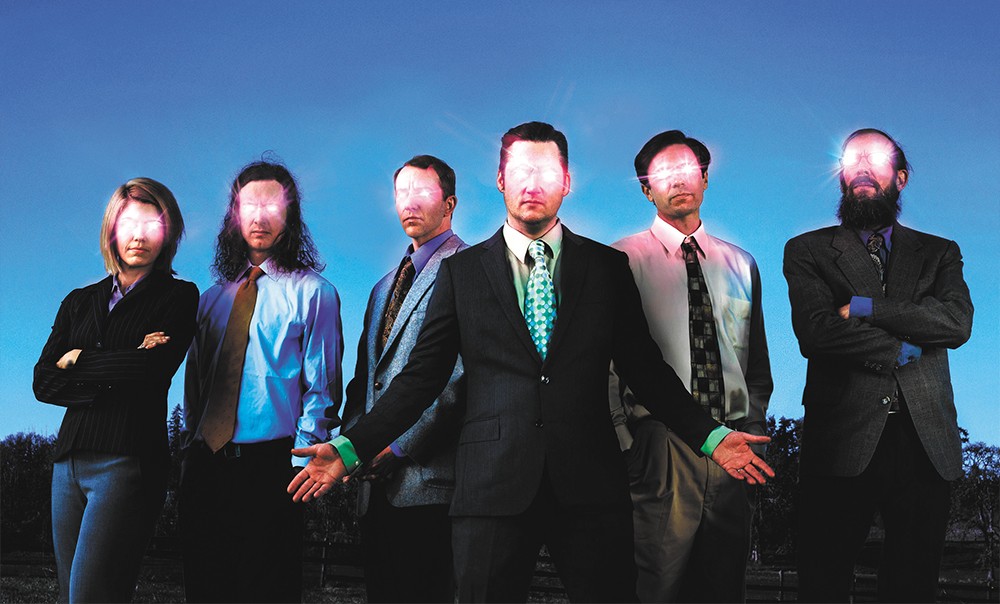 Modest Mouse headlines a sold-out show at the Knitting Factory May 23.

I've been scarred by Modest Mouse — and not in a psychological, PTSD, I need a therapy dog and prayer sort of way (that would actually be sad), but in a midnight run to the ER, sitting in plastic chairs, putting pressure on a wound, waiting to get stitched up way (which is less sad and kind of funny).

It started, as these things do, with an ill-advised trip to North Spokane in search of a girl.

It's the night before Thanksgiving, which — if you love your family, then you probably don't know — is when people get loaded before having to spend concentrated time with relatives. My buddy Ben has been doing just that when I meet up with him in downtown Spokane. This is years ago, and Ben and I had bonded over our broken hearts, soothing them with vodka and soda (low on calories, high on drunkenness).

This particular night he's texting a new prospect who's partying with her friends in a bar way up north (might as well be Canada) called Fizzie Mulligans. Ben wants us to go there, and with me being sober, he wants me to drive.

I agree to be his designated driver on one condition: I get to play my music, as loud as I want, on the long car ride north.

I crank up Modest Mouse as I slide behind the wheel of Ben's Subaru. I start with the track "Other People's Lives" off of their 2000 album Building Nothing Out of Something. It's one of my favorite songs — frontman Isaac Brock is in usual form: lisping, mumbling, screaming — and the song's refrain fits our sad sack state of affairs: "Other people's lives seem more interesting because they ain't mine."

It's also a song that, if you ever needed to clear a room, will rapidly send people for the exits: The 7-minute-long opus devolves into screeching guitars set, seemingly, to the rhythm of a fire alarm ("waah, waah"), with ear-piercing drums crashing over the top. In the right mood, pumped to full volume, the song blocks out all other sound and fury in the world and is simply spectacular. The music of noise, I earnestly explain to people holding their ears.

Sounds like beached whales screaming for help, Ben says from the passenger seat. Or maybe they're just screwing each other! Ben thinks himself funny and reaches to skip to the next track.

Sure, I could have chosen something else from Modest Mouse's deep catalog. I've known the Issaquah, Washington, band since I was a college kid in Chicago, back in the mid-'90s, and I can recall the first time I saw them perform, in a mostly empty Schubas Tavern in the Windy City. There I was, a kid from Greenacres, Washington, among the 20-some people mesmerized by Brock's ripping rendition of "Doin' the Cockroach."

For many years after that — before their commercial, radio-friendly hits made them a household name — I felt they were my band, my secret to share with friends; from my second-story apartment during college, I pointed my speakers out the window, toward the street, whenever I blasted "Talking Shit About a Pretty Sunset" from their '96 album This is a Long Drive for Someone with Nothing to Think About.

But on this particular long drive to Fizzie Mulligans, I have one thing to think about: My friend Ben is an asshole.

He's insisting now that we change the music. Admittedly, I may have picked "Other People's Lives" as sort of a punishment for him — I really don't want to shuttle him to see a girl who may or may not be interested in our current brand of stupid — but that's not the point, and it does nothing to quell my anger. I'm as red-faced as Brock in the song "Shit Luck," shouting, "This plane is definitely crashing!"

I want to turn the car around.

We arrive at Fizzie Mulligans to find it at capacity, with a line at the door. Ben texts the girl to let her know we're outside. She couldn't care less. I want to go home, or at least get a beer, but I'm stuck here, the night before Thanksgiving, in the cold, pissed at my best friend, sober.

Behind me, a guy approaches, and rather than get in line, he hops the chest-high wrought iron fence surrounding the bar's outdoor patio and proceeds inside. A second guy follows. Regulars, I assume.

I decide to leave Ben in line and pole vault the fence as well. I take a step or two for momentum and after swinging my legs over, I realize my hand has slid over something razor-sharp. I clench my fist tight as I snake through the bar, to the bathroom, where I run my hand under water. A 2-inch-long gash opens like a flower, gushing blood, and with wadded brown-paper towels, I ball my hand and head to the bartender.

Time for a beer.

I call Ben, who's still stranded in line. I'm almost to the door, he insists. Just wait!

I stand frozen for a moment in the middle of the bar, my hand clenched in a bloody fist, and loud and happy people buzz by me in a swirl of cheap beer and sweat. I can't imagine then what will later become of me: the wife, the mortgage, adulthood, fatherhood, the faded scars of youth and the fact that I'd still be listening to Modest Mouse 20 years after I saw them in that empty bar in Chicago.

No, all that would dawn on me later.

Right now, as I leave Fizzie Mulligans and find Ben marooned outside, I tell him about a different revelation: I need to go to the hospital! ♦

Rep. Jenny Graham, outed for her links to conspiracy-theory websites, has a healthy lead in Tuesday's preliminary election returns