The Hardening of the 'Special Snowflake' 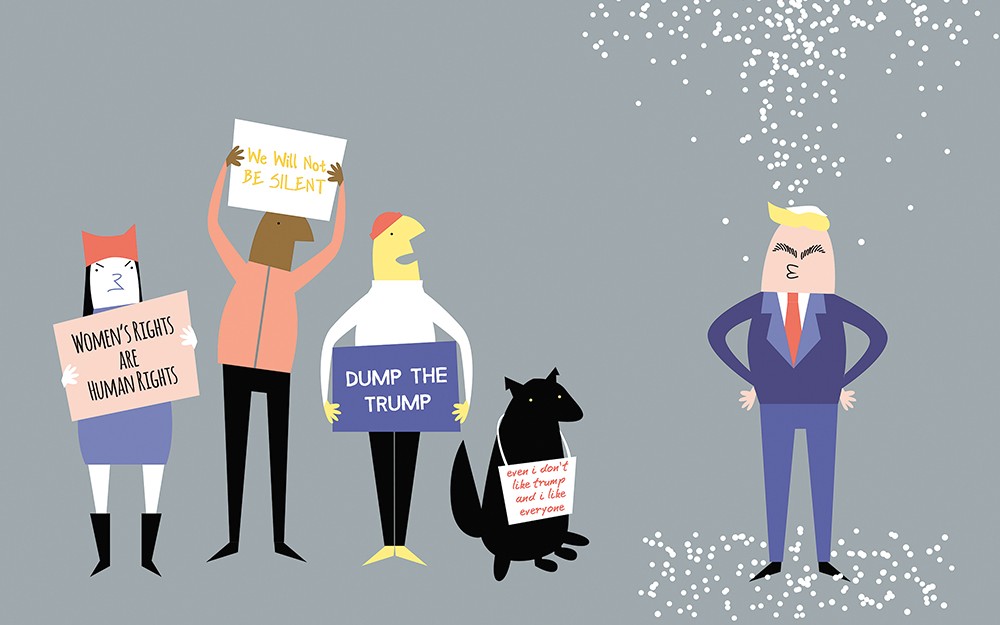 Jessie Hynes
A few snowflakes amount to nothing. Enough, and you have an avalanche.

There have been many insults lobbed by Donald Trump supporters, many laden with sexual, anti-Semitic and racist connotations.

But as a pure term of art, few insults have had the staying power as "special snowflake," the ubiquitous phrase used to mock, in particular, oversensitive liberal millennials, the sort who demand that college administrators protect them from the realities of the outside world.

It's an artful phrase. "Special," of course, calls to mind condescension and euphemism, channeling the assurances of a mommy that, no matter what the kids at school say, her little baby boy will always be special to her.

Every snowflake, we learned while cutting snowflakes out of construction paper in first grade, is special, in its own way. Snowflakes are fragile. Snowflakes must be handled gingerly. Snowflakes melt under the slightest bit of heat.

But there's another quality to snowflakes, one that has revealed itself in the flurry of protests after the election. A few snowflakes are nothing. You can catch them on your tongue or brush them off your shoulders. But enough of them, coming at you with enough fury? Then you've got a blizzard. Even more, and you've got an avalanche.

Originally, the "snowflake" phrase was popularized in the 1999 movie Fight Club, based on Chuck Palahniuk's 1996 novel of the same name, as a contemptuous dig at the wimpiness of modern man.

"Listen up, maggots," says the film's Tyler Durden, avatar of reclaimed masculinity. "You are not special. You are not a beautiful or unique snowflake. You're the same decaying organic matter as everything else."

As it took on its more modern meaning, conservatives found plenty of examples of "special snowflakes" to mock.

A September 2015 Atlantic magazine article, "The Coddling of the American Mind," depicted college students as far different from the rabble-rousers fighting for free speech in the '60s.

Some students called for "trigger warnings" alerting sensitive students about, say, the domestic abuse depicted in The Great Gatsby. They condemned comments like "I don't see race" as racially offensive "microaggressions." They demanded that colleges disinvite speakers like former Secretary of State Condoleezza Rice from giving commencement addresses. They sought out "safe spaces," specific spots on campus protected from hurtful words or damaging points of view.

Trump himself didn't use the phrase "special snowflake" during his campaign, but he used "political correctness" as a whipping boy, blaming it for everything from crime to terrorism and government malfunction. Every freak-out over an outrageous statement from Trump simply served to show his supporters that he was not a man constrained by namby-pamby niceties.

But as the shock has worn off, something else has happened to the "special snowflakes." Trump has united liberal millennials, honing their cause to a sharp point.

Instead of calling for "safe spaces" to protect students from offensive ideas, some college students are demanding that university administrators defy the federal government, if necessary, to protect their undocumented classmates from deportation. They have very clear, very tangible grievances they can rally against.

Trump took everything liberal millennials have been railing against for a decade and gave it orange flesh and a combover.

Rape culture? Trump was caught on tape bragging about how his fame enables him to commit sexual assault with impunity — and was elected anyway. Racism? Republican Speaker of the House Paul Ryan called Trump's attacks on the Mexican heritage of a federal judge the "textbook definition" of racism.

Income inequality? Trump, avatar of excess, once tried to bulldoze an old lady's house in Atlantic City to make way for a limousine parking lot for his now-closed Trump Plaza casino.

Even protests intended to prevent controversial figures from speaking on college campuses, like the recent one protesting Milo Yiannopoulos at the University of California at Berkeley, no longer seem as trivial. It was one thing to get angry over Yiannopoulos when he was just an asshole provocateur working for Breitbart News, an obscure, extremist website that specialized in asshole provocation. It's another thing entirely when Yiannopoulos' former Breitbart boss, Stephen Bannon, is in the White House inner circle, pulling the strings behind the presidency.

Meanwhile, the nature of these protests, which attracted anarchists armed with baseball bats and Molotov cocktails, hardly fit the "special snowflake" meme.

Snowflakes don't riot. Snowflakes don't set things on fire. Similarly, recent debates on the left — should we sucker-punch white supremacists? And if so, how hard? — are light-years away from last year's arguments over whether serving sushi at Oberlin College's dining hall reinforces cultural appropriation.

Trump's inauguration, in fact, has already signaled the beginning of a role reversal around political correctness.

The so-called "special snowflakes" are now the ones dropping F-bombs at protests and thrusting their middle fingers into the air, and Trump supporters are the ones shaking their heads in sadness about "obscene and repulsive signs."

These days, the "special snowflake" epithet is just as likely to be used by liberal critics to mock the fragility and sensitivity of Trump and his supporters.