The hero family makes a welcome, if predictable, return in Incredibles 2 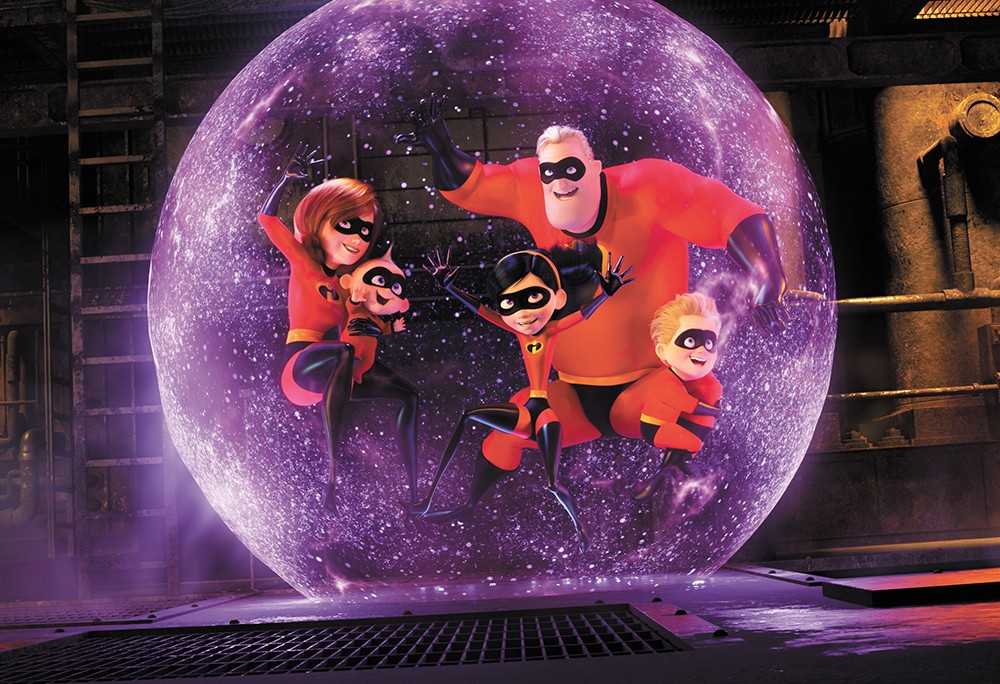 Your friendly neighborhood superheroes: Like its predecessor, Incredibles 2 explores themes of identity and domesticity.

Although it's been 14 years since the release of Pixar's The Incredibles, Incredibles 2 opens right where the previous movie left off, with the central family of superheroes facing off against subterranean supervillain the Underminer (voiced by Pixar favorite John Ratzenberger). The rest of the movie feels similarly like an extended epilogue, and while it's never less than enjoyable to spend more time with Mr. Incredible (Craig T. Nelson), Elastigirl (Holly Hunter) — aka Bob and Helen Parr — and their kids, there's a sense of redundancy that the movie can never quite shake.

As in the first film, costumed crime fighting remains illegal, so even though the Parrs have found new enthusiasm for their superhero identities, they must continue their attempt to live normal lives. That's especially frustrating for super-fast son Dash (Huck Milner) and shy teenage daughter Violet (Sarah Vowell), who can turn invisible, since both had embraced their powers and their superhero destinies by the end of the first movie.

When sibling tech moguls Winston and Evelyn Deavor (Bob Odenkirk and Catherine Keener) offer Helen the chance to restart her career as Elastigirl in an effort to change superhero-related laws, she rediscovers her passion for crime fighting. Meanwhile, Bob stays home with the kids, even though all he wants is to join his wife in taking down bad guys. Since this is a superhero movie, obviously it's only a matter of time before the entire family (including baby Jack-Jack, who may be the most powerful of them all) is called upon to save the day.

Their adversary this time is the mysterious Screenslaver, who's able to control minds via hypnotic broadcasts and appears to be targeting the superhero community — both veterans, like Mr. Incredible and Elastigirl and their pal Frozone (Samuel L. Jackson), and the new heroes that the Deavors have inspired to come out of the woodwork. For a PG-rated movie, Incredibles 2 has some remarkably intense and creepy moments as Screenslaver takes over the minds of his victims, but as a villain he turns out to be a bit underwhelming once all his secrets are revealed.

He also has fairly similar motivations to Syndrome, the villain from the first movie, and returning writer-director Brad Bird uses them to make similar points about the value of individual exceptionalism and heroic duty. The message is a little more subdued this time around, actually, with Bird spending more time on the family dynamics, which is where the writing and voice acting really shine. In a way, it's a shame that Incredibles 2 couldn't just be a full-length superhero family comedy, because watching Bob attempt to parent his superpowered kids while learning the intricacies of new math is generally more enjoyable than figuring out Screenslaver's master plan.

Bob's emotional journey (he discovers that parenting is hard!) is a little simplistic, though, and Incredibles 2 doesn't quite have the emotional range of the best Pixar movies. A subplot about Violet's crush on a fellow student (who literally doesn't know who she is because he had his memory wiped after accidentally discovering her secret identity) doesn't go anywhere interesting, and Jack-Jack's seemingly endless arsenal of new and dangerous powers takes up too much screen time for a one-note bit.

Helen's superhero reawakening is the movie's most rewarding storyline, and Hunter brings soul and depth to her voice performance, balancing upbeat excitement with familial affection. A mid-film action sequence featuring Elastigirl on her new Elasticycle chasing down a runaway train is the visual highlight of the movie, a kinetic and creative series of animated stunts that rival anything in a live-action superhero movie. Bird has spent the last several years honing his skills in live action (directing one of the best Mission: Impossible movies with Ghost Protocol, as well as the ill-fated Tomorrowland), and he brings that same sense of grandeur in his return to animation.

The movie's overall visual style is equally impressive, and 14 years have allowed for plenty of advances in computer animation technology (some of the animation in the original movie now looks quite dated, especially in the underpopulated backgrounds and the sometimes stiff character interactions). The design of the main characters is close to timeless, but everything around them pops with a new vibrancy and expressiveness. Every new superhero has a clever, distinctive design, and the action is bolder and more immersive than it was the first time around.

Even so, the plot drags on longer than it needs to, especially once Screenslaver's true identity comes to light. The characters accomplish pretty much the same things that they accomplished in the first movie, just on a slightly larger scale, and the same goes for the filmmakers. It's clear at this point that Pixar can pull off almost anything, so of course Incredibles 2 is a success. That's exactly what everyone expected it to be. ♦

The original print version of this article was headlined "Mostly Super"

Incredibles 2 is not showing in any theaters in the area.