Are e-cigarettes harming kids more than they're helping adults? 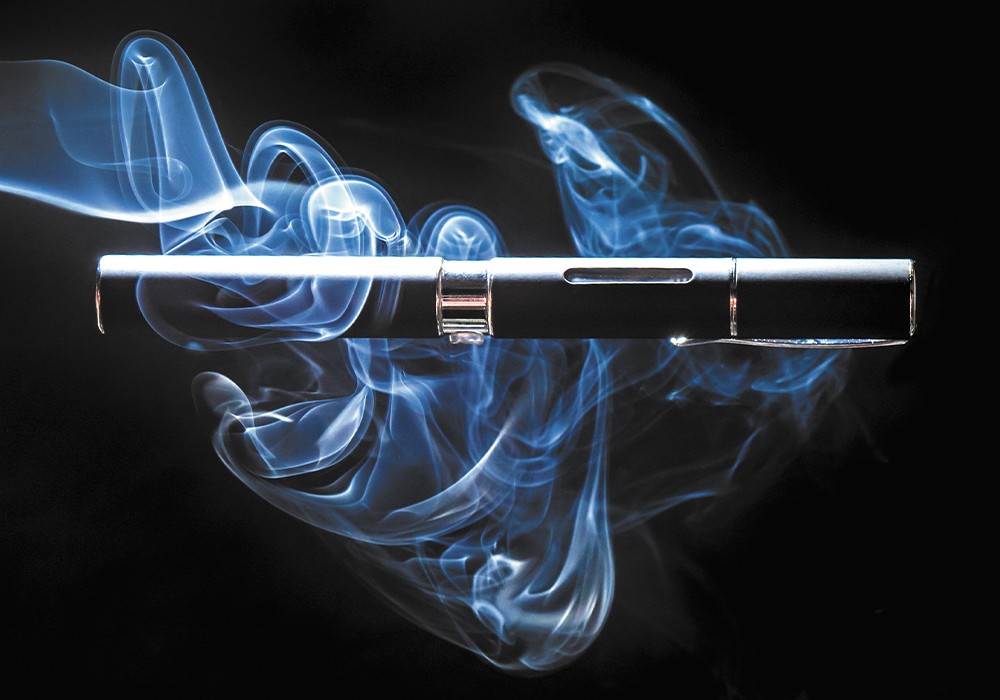 E-cigs simulate smoking by turning liquids — often with flavorings and nicotine — into an aerosol, or vapor.

When electronic cigarettes burst onto the scene a few years ago,

they did so with an implicit promise: Finally, an effective way to quit smoking. (For legal reasons, of course, this promise had to remain implicit.) With the possibility of getting the kick of nicotine without risking the carcinogenic side effects, the business of "vaping" is on fire. One Wells Fargo analyst predicted that by the end of 2015, the vaporizer market will have grown to $3.5 billion, a 40 percent leap in a single year.

There's one particular market that's growing especially quickly: A market where e-cigs are mostly illegal. In a single year — 2013 to 2014 — e-cigarette use tripled among middle and high school students, the Centers for Disease Control and Prevention found. More kids, these days, are vaping than smoking.

Phil High-Edward, assistant principal at Shadle Park High School, doesn't doubt that at all. He's seen it unfold before his eyes. "We saw the cigarette kids immediately become e-cig kids," High-Edward says. He caught more than two dozen kids with e-cigarettes during the past school year, but only a handful of kids with traditional cigarettes.

One of the devices' big selling points — the lack of intense odor — has become a huge problem for administrators. They used to literally be able to sniff out cigarette smokers. The evidence hung in the air in an actual cloud. That's not the case anymore.

"The old adage of 'smoking in the boys room' has turned to 'smoking in the hallway' and 'smoking in the classroom,'" High-Edward says. A teacher will turn around to write something on a whiteboard, and a kid will pull out his e-cig, take a puff, and hide it before the teacher turns back.

An entire subculture has emerged, complete with inventors and entrepreneurs. High-Edward pulls out one jury-rigged e-cig device that appears to be largely homemade. He says several Shadle students offered repair services for vaping devices, charging peers $5 to $10 for their work.

While the CDC found that cigarette use has declined among high school students overall, the recent steep decline started before the introduction of e-cigarettes. The explosion of hookah and e-cig use has overwhelmed the decrease in conventional cigarettes. 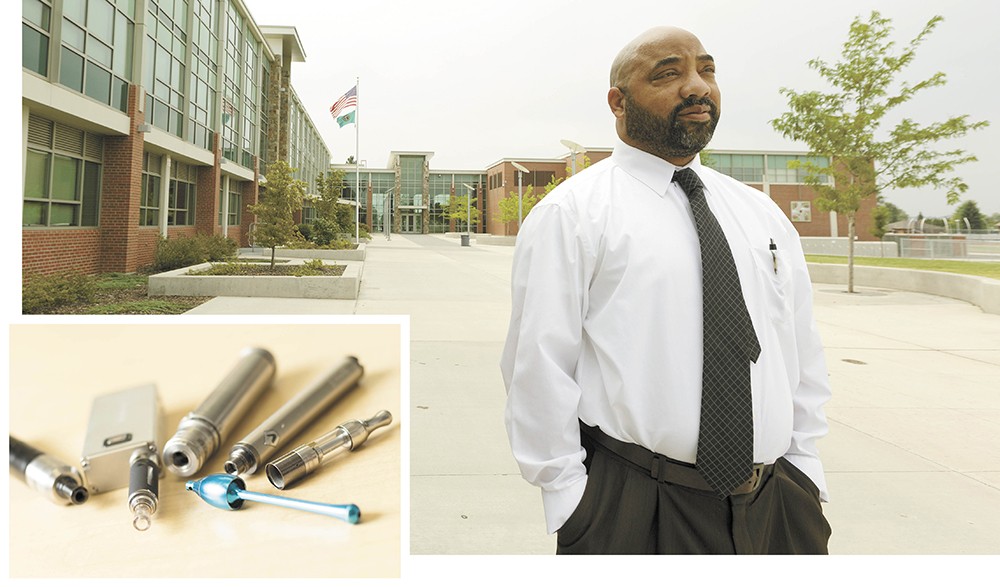 Among middle-schoolers, there hasn't been a recent decrease in cigarette use — meanwhile, hookah use nearly doubled and e-cigarette use more than tripled. "Kids who have never smoked, who probably would never have smoked, are ingesting chemicals into their lungs," says Wendy Bleecker, director of student services at Spokane Public Schools. "I believe it's increasing kids' usage of nicotine."

Complicating matters further, it's not always nicotine in the e-cig cartridges. It can also be THC, the active ingredient in marijuana. Administrators can't always tell which is which without testing the canisters.

Today, it's illegal to sell such tobacco products, including e-cigs, to minors in Washington state. In 2011, the Spokane Regional Health Department found nearly every area e-cig shop sold to minors, despite claiming not to. Sometimes, administrators say, kids steal the e-cigs from their parents or older siblings. Other times, parents give them e-cigs intentionally, thinking they're better than smoking. High-Edward doesn't buy that argument.

"You just trade addictions," he says. "There's still a monkey on your back. Still something you feel you need to have to function."

The television advertisement is shot entirely in soft black and white, but for the blue of the Blu e-cig device and logo. Blade actor Stephen Dorff, with a rugged goatee and a casual suit jacket, stands on a beach, waves roaring in the background.

"I'm tired of being a walking ashtray," he says. "I'm Stephen Dorff. I've been a smoker for 20 years, and I just found the smarter alternative. Blu e-cigs. Blu lets me enjoy smoking without affecting the people around me. Because it's vapor, not tobacco smoke." No ash, he says. No offensive odor. You can smoke "virtually anywhere."

He pauses, takes a long puff of the e-cig, the end glowing blue against the black and white. Smoke — or vapor, technically — rolls out of his mouth, billowing toward the camera.

"We're all adults here," Dorff says. "It's time we take our freedom back."

The tiny disclaimer at the bottom of the screen says NOT FOR SALE TO MINORS. But minors are still persuaded. After all, the ad says, here's how you can look like an adult, without any of the negative consequences.

That ad and three others were part of a study published in the American Journal of Preventive Medicine, showing that the likelihood of future use increased 50 percent among adolescents who saw the ads versus a control group. Another 2014 study showed that youth exposure to e-cig ads more than doubled between 2011 to 2014.

"Marketing that we're seeing for e-cigarettes looks just like tobacco marketing did in the 1950s," Frieden said. "E-cigarette marketing expenditures tripled each year from 2011 to 2013. Marketing is about sex, free samples, flavors, aggressive marketing promotion and distribution." 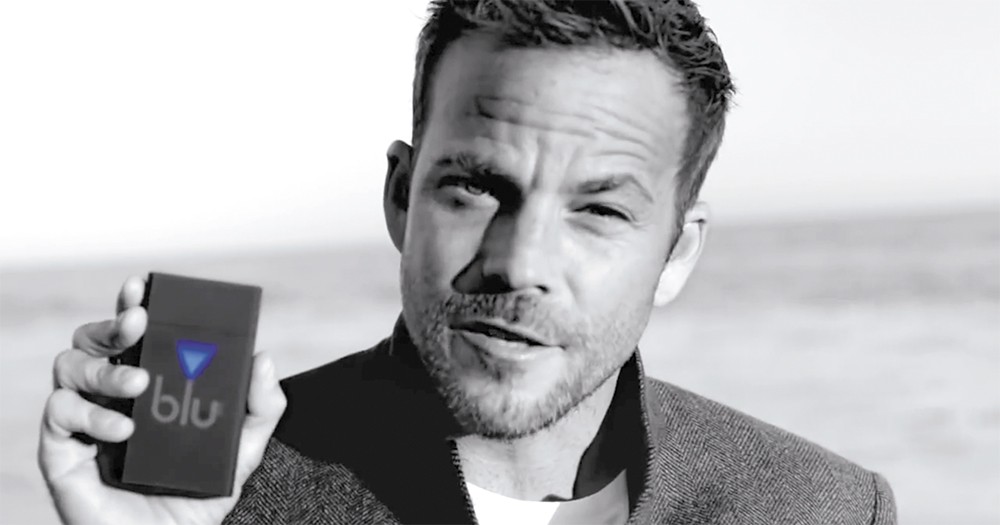 "I've been smoking for 20 years, and I just found the smarter alternative," says actor Stephen Dorff in an ad for Blu e-cigs.

While adults often mock e-cigarette use as dorky or sleazy — consider comedian Rob Delaney's #ChristianDadsWhoVape Twitter gag — they've caught on in high schools. "It's the next fad, the coolest thing," says Spokane Public Schools' Bleecker. "Kids who have never smoked before are using them and are getting addicted really quickly."

In some cases, the products themselves can be the advertisement. Steve Fisk, principal of North Central High School, sees the rows and rows of nicotine flavors — "Check out 300+ flavor combos," the Smart Smoke website raves — as the sort of thing that targets kids. "If you go to a candy aisle, how many fruit flavors do you see? Five or six? Grape, cherry, watermelon, lemon," Fisk says. "And these things aren't Jolly Ranchers."

Exactly how dangerous — or how safe — e-cigarettes are remains a huge unanswered question. The notion that they're safe, or at least safer, is part of what makes them so compelling.

"We have a certain amount of parents that purchase e-cigs for their kids, saying, well, it's less harmful than a pack of Marlboros," High-Edwards says. But even without the same stew of carcinogens, nicotine is still nicotine. And for kids, nicotine isn't just addictive. It can have permanent consequences.

"Smoking cigarettes during adolescence has been associated with lasting cognitive impairments, including memory and attention," says the CDC's Frieden. "That's the impact of the nicotine, not the tobacco. ... Animal studies have compelling additional evidence that nicotine exposure causes both long-term structural and functional changes to the brain."

Typically, nicotine levels in e-cigs have been lower than traditional cigarettes. But earlier this year, Pax Labs landed $46.7 million in investment. The big secret? They blast out the nicotine.

"It's 10 times as much nicotine as other e-cigarettes on the market, which sounds crazy high, but it's actually what you get per puff from a cigarette," Pax co-founder Adam Bowen recently told Inc. magazine.

Will e-cigs, for the most part, remain safer than traditional cigarettes? A 2012 literature review by Richard O'Connor, associate professor of oncology at the Roswell Park Cancer Institute, found that the "limited data" suggested that health risks of the devices were unlikely to approach the cancer-causing dangers of cigarettes. Nonetheless, the sheer variety of devices, combined with the lack of quality control, makes drawing conclusions complicated. One recent study, for example, found that e-cig devices could pump out dangerous amounts of formaldehyde, but only if the voltage on the devices was cranked up to atypically high, undesirable levels.

In July, Congressional Republicans narrowly blocked an amendment that would have subjected e-cigs to FDA pre-review. "The GOP should be the party of freedom of inhalation," National Review writer Jim Geraghty suggested on Twitter.

The big question — what is the long-term health impact of using e-cigs? — remains an open one. After all, the device was invented just a little more than a decade ago.

What is starting to become clear, however, is that the hope that e-cigarettes would help large numbers of adults quit smoking just isn't being borne out by the numbers. Three-quarters of the folks who smoke e-cigarettes still smoke regular cigarettes. The CDC is worried the trend could go the other way as well — that e-cigarettes could be a gateway drug to classic cigarettes.

"We do know that with addiction, the possibility of progression to other forms of tobacco is significant," says Frieden.

One of the big claims about vaping — you see it in Blu e-cigarette ads — is that it doesn't affect others. Secondhand smoke, the health concern that got cigarettes banned from diners, bars and bowling alleys, supposedly doesn't apply to vaping.

Not so fast, studies have shown. In February, researchers at Johns Hopkins University released a study showing effects on the immune systems of mice exposed to human-equivalent levels of e-cigarette vapor. When the mice got sick, the mild impacts of inflammation resulting from protein damage grew far worse.

"Our findings suggest that e-cigarettes are not neutral in terms of the effects on the lungs," researcher Shyam Biswal said in a statement. But when compared with the savage secondhand effects of cigarette smoke, e-cig vapor seems healthier. The chemicals in the vapor tended to be far more diluted in an average room than cigarette smoke. Ultimately, it's the dose, as any scientist will tell you, that makes the poison. As for the long-term impact of secondhand vapor, we'll just have to wait and see. ♦

Right now, like most states in the union, Washington allows 18-year-olds to purchase both electronic and traditional cigarettes.

In Hawaii, it's different. In June 2015, the governor of Hawaii signed a bill to raise the smoking age to 21. This year, Washington Attorney General Bob Ferguson has been pushing for his state to do the same.

"From my standpoint, trying to prioritize the legislative agenda, I can't find a greater priority than literally saving lives," Ferguson tells InHealth. "We said 21 is the age for smoking marijuana. We said it for consuming alcohol. To have smoking any cigarettes at that age makes sense."

And yes, that includes e-cigarettes. "I think the long-term health effects for e-cigarettes are largely unknown at this point," he says.

In the legislature, the measure received bipartisan support, clearing the House Health Care & Wellness Committee with plenty of breathing room. When it arrived at the House Finance Committee, things got more complicated. The Institute of Medicine estimates that raising the smoking age to 21 would reduce the amount of smoking for 15- and 17-year-olds by as much as 25 percent.

Since Washington raises tax revenue by charging major fees on cigarettes, a reduction in smoking would cost the state significant amounts of money: an estimated $10 million a year.

"Long-term, we'd save many millions of dollars of cost to the state by having fewer teenagers getting addicted to nicotine," Ferguson says.

By the time the bill got out of the finance committee, however, it was watered down, only raising the age to 19. Amid the hubbub at the end of the legislative session, the bill went nowhere. The story's not over yet, though.

"You're going to see this bill come back again next year," Ferguson says. "Seventy-five percent of Americans support raising the smoking age to 21. The public supports this."