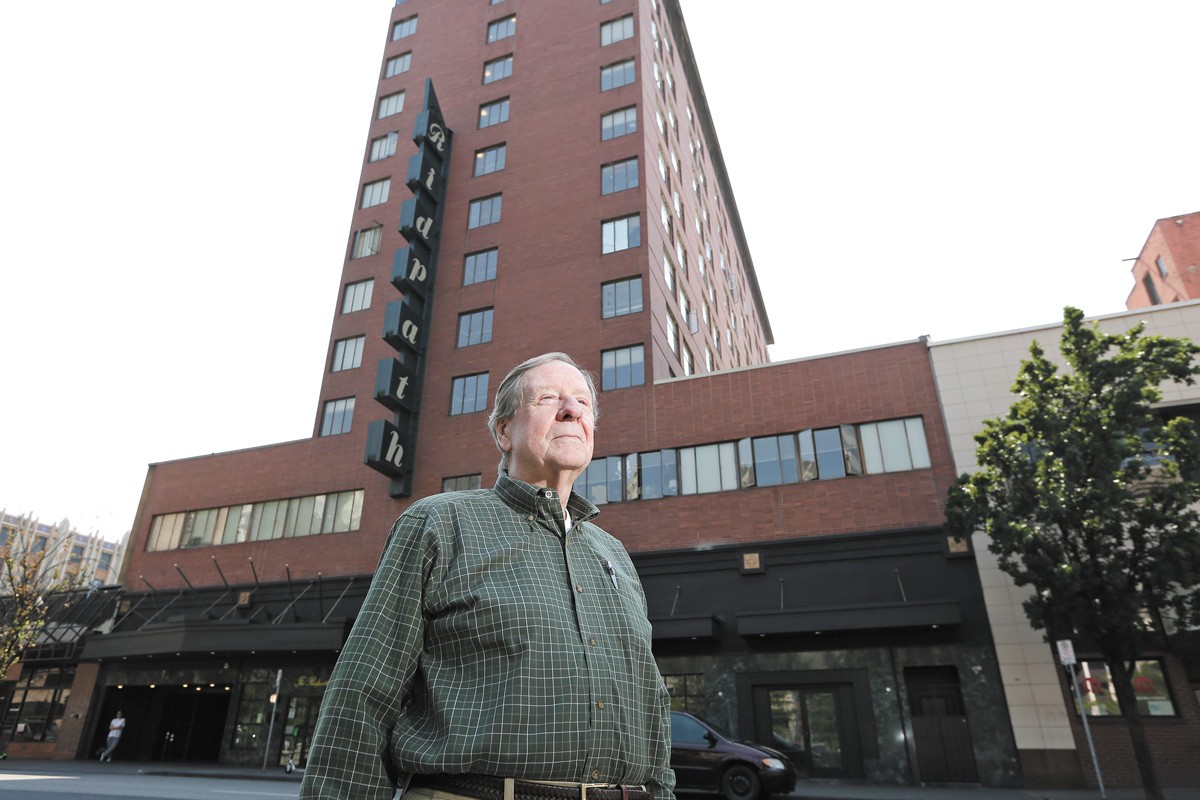 Young Kwak photo
Paul Mann isn't just a co-owner of the Ridpath; he lives in a condo at the top floor.

Ridpath co-owner Paul Mann has read years and years of newspaper articles with descriptions of the "troubled Ridpath project," but today, as he sits in the high-rise's sprawling lobby, he's optimistic.

"All of the days of the troubles are mostly behind us," he declares.

It took a full decade for the shuttered Ridpath Hotel to be transformed into the Ridpath Club Apartments. And when the iconic downtown building at 515 W. Sprague Ave. finally reopened in 2018, it was thanks in part to the city of Spokane: The city had gone from frustrated observer of the project to an active investor in 2017, shelling out $1.75 million in leftover federal housing program funds to push the development over the finish line.

But three years after the Ridpath Club Apartments opened, the property has yet to turn a profit, and so the city hasn't gotten a cent of its investment back. And some people have been questioning whether it's worth it.

Before he resigned from the city in June, neighborhood services director Cupid Alexander wrote that he'd been uncovering the city's "inability to recover nearly $1.5 million in HOME [Investment Partnerships Program] and Rental Rehab Funds due to an ill-advised development deal" with the Ridpath.

But Mann says the city wasn't worried about being paid back quickly so much as creating more downtown housing and preventing an abandoned high-rise from spreading urban blight in the city's core.

On one measure, the project is a clear success: The apartments are almost completely filled. But much of the complex still looks abandoned from the outside, like a victim of blight instead of a healer of it. Spaces envisioned for a coffee shop, a restaurant and a bar have remained empty shells. Plywood covers a broken window nearby.

And yet, even in the last month, there have been new signs that the block is beginning to experience exactly the sort of transformation that local leaders had been rooting for.

"Nothing has gone perfectly," Mann says, "[But] I think we're a great success story."

Young Kwak photo
The Ridpath's previous life as a hotel — and fire-resistant metal skeleton — meant that much of the tower could only be converted into small "microapartments" like this one.

"It was a great deal for the city," says Mallahan, now vice president of housing at Catholic Charities.

Yes, the city is toward the back of the line when it comes to repayment — and it only starts getting paid back if the Ridpath property begins making a profit. But even if the city never gets a dime from the project, it was still worth it, he says.

After all, without the city's help, it seemed like it would have been impossible for the project to get off the ground. A con artist — literally later sent to prison for fraud — had helped divide the hotel up into pieces before the Great Recession hit, attempting to sell it off bit by bit.

For nearly a decade, the hotel and the block's surrounding properties became a tug of war between teams of feuding investors, competing to see if anyone could snag enough pieces of the complex to make high-rise redevelopment worth it.

Ultimately, the city of Spokane threw its weight behind a team led by developer Ron Wells, a hero of downtown redevelopment who specialized in rehabbing historical buildings. But shortly after that, in late 2018, Wells was indicted on an unrelated insurance fraud scheme.

With the experienced Wells' taken off the project, his business partner Mann was thrust into the driver's seat.

"All of a sudden, I was making decisions and chairing the weekly construction meetings," he says.

Meanwhile, the city's money came with a catch: Of the 206 new small apartment units, the vast majority had to be reserved for affordable housing for the next four decades.

"We have 184 affordable housing spots in the heart of downtown. And that's a huge achievement from a building that was a wreck," Mann says. "If the objective of the city's investment was to provide affordable housing in the downtown core, it's obvious that we've accomplished it."

Getting that many affordable housing units for only $1.75 million was an incredible steal, Mallahan argues.

"Show me any other project the city's ever done where they've purchased 40 years of affordability for $10,000 a unit," Mallahan says. "I guarantee you, you can't."

The apartments are far from perfect: Tenant advocates have raised concerns about bedbug infestations, broken air-conditioning units and other issues.

Mann acknowledges problems continue to crop up — the building had been mothballed for a decade, after all.

"But our experience is that our tenant population is genuinely grateful to have this place to call home," Mann says.

"Show me any other project the city's ever done where they've purchased 40 years of affordability for $10,000 a unit. I guarantee you, you can't."

Even now, however, the Ridpath project isn't quite complete.

Former Spokane chef Jeremy Hansen ditched an agreement to turn two spaces on the Ridpath's ground level into a bar and a high-end restaurant in late 2018, telling the Inlander a few months later that the Ridpath had made conditions in the neighborhood worse instead of better. Mann is still tangled up in arbitration with Hansen over the dispute.

To complicate matters, right in the middle of a search for a new restaurant tenant, the world was hit with COVID-19, the virus that shut down downtown restaurants and the office high-rise workers who patronized them.

Mann knows that the vacancy hurts more than his bottom line.

"That empty space doesn't help the neighborhood," Mann says. "It doesn't lend itself to a vibrant, active streetscape."

One of the ground-floor spaces that Mann had been eying for a coffee shop also sits empty, partly because of Mann's own security concerns. Mann wants to keep the Ridpath apartments' lobby locked to non-residents, and the coffee shop doesn't have an exterior exit.

But Mann notes that he doesn't actually own some of the other vacant pieces that are associated with the Ridpath, like those in the Symons building to the west of the Ridpath Tower or in the Halliday building, in the eastern part of the Ridpath complex.

Meanwhile, Ann Cao, owner of the 7 Wonders beauty spa and salon, says that the spot in the Ridpath complex with the broken window covered in plywood had been purchased by her brother a few years ago, with plans to launch a new downtown salon.

But that project stalled, too. Part of it was COVID. But she also says her hopes that the Ridpath would quickly revitalize the area hadn't come to pass.

Last summer, when someone broke one of the windows, they put up plywood instead of replacing it with more breakable glass. But now, she says, the project is moving forward again. With the closure of competing spas in Kendall Yards and on the South Hill, she sees more of a market for a high-end downtown salon to make an impact.

Even if the Ridpath wasn't changing the neighborhood as fast as they wanted, other properties in the neighborhood such as the new Marjorie Apartments across the street and the revived and rebooted Wave sushi grill were generating excitement.

Just as blight and vacancy can spread, so can renovation and renaissance. At the Symons building next to the Ridpath, newly minted restaurateur Aaron Hein cites the Wave and the Marjorie Apartments as evidence that he made the right choice to open People's Waffle in the part of the old Observatory space this year.

"People are starting to take some risks," Hein says. He's getting ready to launch Emma Rue's, a cocktail bar and coffee joint in the other half of the Observatory space.

A week later, a cleanup crew is tossing sheetrock and carpeting into a trailer — part of turning the office space in the upper floors of the Symons building into more much-needed residential apartments.

"This building is being revitalized," Hein says. "I think creating a new energy in here is really changing the block. ... I figure, the more we do that, it attracts others to do the same."

Cao says she met with Mann recently and was enthusiastic about what the various Ridpath owners and neighbors could do if they combined forces and met together regularly.

"If we can fix up the main lobby to be nicer — have AC, and maybe just have new flooring and turn on [lights] to make it nice and brighter — you can attract some really good tenants in here," she says.

Indeed, Mann says they're using another boost from the city, a grant for projects of citywide significance, to boost the look of the Ridpath exterior.

Best of all, he says he finally found a new tenant to take over Hansen's empty space.

"I signed a lease two weeks ago," he told the Inlander last Thursday, though he declined to reveal details.

Kim Sample, the property manager for the Ridpath Club Apartments, indicates it will be leased through Craig Larsen, owner of Jimmy Z's Gastropub & Red Room Lounge, and she credits Mann and his team with providing the rent abatement to make it happen.

"They want to see that area evolve," she says. ♦