The Start of Something Big

Why is taking on an almost insurmountable challenge so irresistible to so many?

In the midst of the Inland Northwest's summer

training season, trails, roads and waterways are full of people hoping to complete a marathon, a 100-mile-plus bike ride, a triathlon or the big daddy of them all, an Ironman. Hundreds of wannabe finishers are working toward big events that will tax stamina and determination.

According to Running USA, the number of people participating in running events in the U.S. has risen in the past two decades from 4.5 million annually to nearly 20 million. USA Cycling reports that the number of competitive cycling events registered in its network has increased from less than 2,000 in 2002 to 3,105 in 2013.

Why do we make a conscious decision to subject our bodies to tortuous training and mob-level competition? There's nothing pretty about the last miles of a rigorous athletic feat. The bike rider's hands are numb, and pain spasms shoot down her neck and across her shoulders. The marathoner pulled a hamstring at the midway point and now every stride is agony. The triathlete can barely remember his name. Some of us throw up. Others faint. Nobody forces us to surge far beyond our comfort zone and push our bodies to levels we never believed possible. What are we, nuts?

Five years ago at age 42, Audrey Danals of Spokane burst across the finish line of the Portland Marathon to the cheers of her husband, two teenage daughters and thousands of complete strangers.

"I didn't think I could ever be a runner," she says. "I was walking for exercise, but had gotten pretty sedentary. Then my sister — who is a triathlete — good-naturedly told me I was right, I'd never be a runner."

That sibling sarcasm turned Danals' life around, and she started running in earnest. The Portland Marathon was the carrot she dangled in front of herself, mile by training mile.

Randy Schwaegler, on the other hand, found inspiration in the mirror. A hectic work schedule left little time for exercise and his weight had crept from the low 200s to 245 pounds. Having run a marathon in 2005, Schwaegler was convinced he could get back in shape. 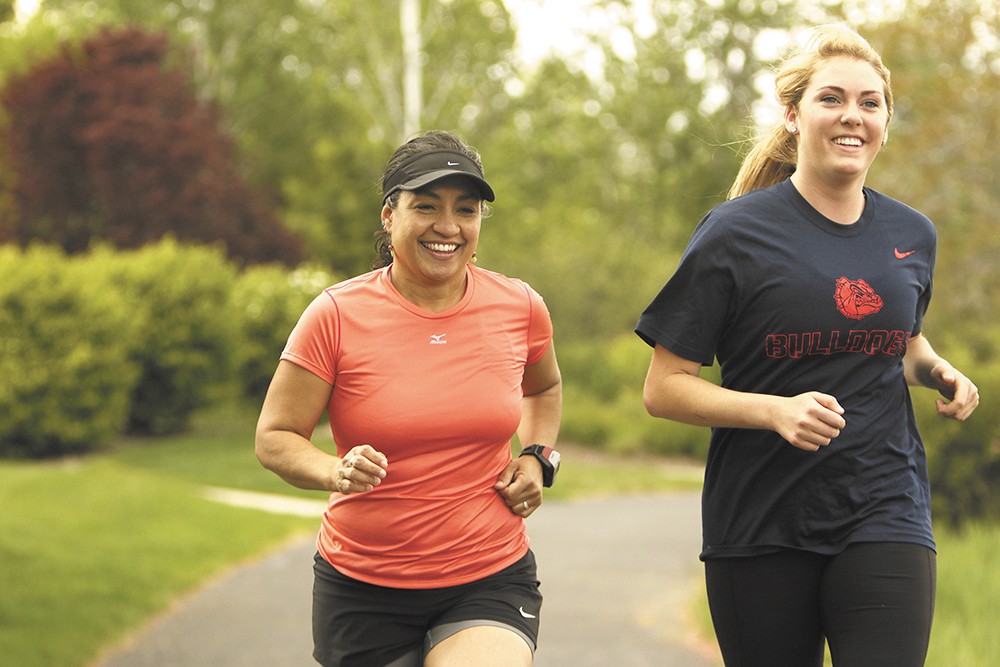 The runner or cyclist will laugh

and tell you the idea to do something "big" was a bucket list thing. Or they wanted to get into shape. Or they were running in memory of a loved one. They will add that the self-confidence they gained from reaching their goal has filtered into their professional and personal life and given them the guts to try new and bigger things.

Karen F. Rickel, Ph.D., associate professor and department chair at Gonzaga University's Sport and Physical Education department, believes some people are driven by kinetics and are natural movers. "In training and accomplishing a goal, they completely control what is going on. They are autonomous, and they like it."

Rickel gives students insight into that feeling in her Psychology of Sports and Physical Activity class, taking them on a semester-long journey toward self-efficacy, physical awareness and mental clarity. "I start by telling them I have a magic pill," she says, "something that will make them happy, help them sleep better, make their skin glow and help them be healthier overall." That magic pill is physical fitness.

Her students set a physical goal — it can be as simple as 10 push-ups or as challenging as running a marathon. She believes the goal gives them focus and establishes a measurement baseline. Throughout the semester, Rickel includes lessons on positive self-talk and imagery and reminds them that through the process, they get to play. In the end, students learn the value of persistence, gain satisfaction and confidence from meeting their goal and learn lifelong health lessons.

While some people are looking for control or education, others want to kick their lives into the next level.

"Many people take on these events because they want to challenge themselves," says Justin Anderson, Psy.D., LP, at Premier Sport Psychology in Minnesota, a mental skills training and counseling organization that works with amateur and professional athletes. "It's been my experience that many marathon runners have an internal drive to grow and do more. Combine that drive with the fact that many professionals (in their) mid-20s to mid-50s are 'stuck' in their daily routines or careers and are not getting that psychological need for growth met," says Anderson.

Getting stuck behind a desk for years may also motivate some new trainees. "Our bodies are made to move. I believe everybody is an athlete," says Nate Thoreson, intramural basketball coach, father of three and lifetime athlete who owns River City Physical Therapy in Post Falls, where he's also a physical therapist. "I like the quote from The Shawshank Redemption: "You can either get busy living or get busy dying." 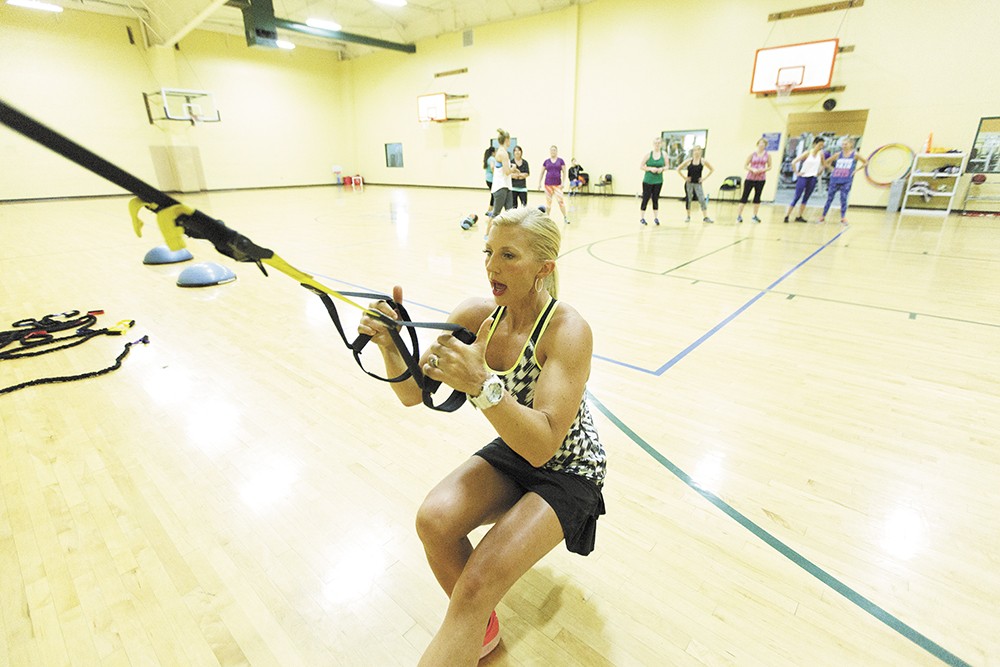 How does an average person

get to the finish line? Do you need a personal trainer, a coach, a team, a class? That depends on your personality, your budget and your goals.

If physical fitness is a fairly new concept to you or if you need nutrition and workout guidance, a personal trainer can be invaluable.

"I start by assessing the client's fitness level," says Aimee Livingston, a personal trainer and high-intensity fitness class instructor at the Liberty Lake Athletic Club. "From there, I build a program around where they are and where they want to go. We work on core strength, flexibility, movement quality, nutrition, and hip and shoulder mobility. Cross training, including strength conditioning, is critical. Nutrition, strength, flexibility and endurance are the keys to success."

The mind plays funny games when it comes to food and working out. It's hard for people who are focused on dropping pounds to wrap their minds around the concept of food as fuel. And it's even harder not to have a double cheeseburger after a 75-mile bike ride that wiped hundreds of calories off your body's caloric balance sheet.

"When you ramp up training, your body needs more calories to fuel itself," says Ryan Hite, U District PT physical therapist and owner of Negative Split, a Spokane company that organizes running events, fitness challenges and training groups. "But they need to be healthy calories. You should eat to train, not train to eat. One of the biggest changes people need to make is getting back to basic, healthy eating. Shop the perimeter of the grocery store where the fruits, vegetables and lean protein are. Eat healthy carbs like brown rice and oats."

Training with a group, working out with friends or joining a club of like-minded athletes can add a powerful dimension. Maybe you have a swimming date who shows up promptly at 5:30 am, rain or shine, and you just can't let her down. Or you finish your first 20-mile run, thanks to the friends running alongside cheering you on. Or you just get tired of watching your cycling buddy's rear wheel, so you power up and push ahead. And stay there.

"Humans are wired to be in relationships," says Thoreson. "There is power in connecting with people. You find encouragement and accountability when you train with others." Schwaegler found the camaraderie of working out with others was invaluable, and he thrived in the supportive atmosphere of his boot camp experience at U District PT.

Audrey Danals, on the other hand, was a soloist, content to compete with herself, relying on online research and advice from her triathlete sister. That worked for her.

commit numerous hours throughout the week and on weekends to train for their events, but no one logs training time like an Ironman. They run, bike and swim all year, but in the six-to-seven-month buildup to the event, they'll spend every morning, evening, Saturday and Sunday working on some aspect of their preparation.

"I'm sensitive to the time it takes away from family," says the husband and father of two sons. "I do most of my training early in the morning, so I'm finished and home before anyone's up."

"My wife Lesley was a huge supporter of my Ironman goal," Schwaegler says. The two of them signed up for U District PT's boot camp together, and when he decided to train for Ironman, he says there were more than a few times she countered his reluctance to train with an enthusiastic, "You gotta go!"

For months, the distance runner or cyclist has sweated and strained and turned monitoring their performance into an obsession. Their children wondered when Daddy was coming home. Their husbands hoped conjugal visits would resume. And for the last however-many hours, they've focused on nothing but the next step, the next pedal stroke. Grown men and women have been known to sob when they cross the finish line.

In this era of digital lust, wearable high-tech training gadgets can measure and record your every waking — and sleeping — moment. There it is on your wrist: number of miles, average and top speed, calories burned, oxygen intake, sleep patterns and heart rate. Program your goals into the Fitbug and it delivers a coaching plan and reports your daily progress. The Garmin Forerunner 620 running watch not only tracks your training, it tells you how much faster you're capable of going.

Just be sure you couple common sense with techno-feedback. Trainers and physical therapists alike say the biggest cause of injury in amateur athletes is training too hard.