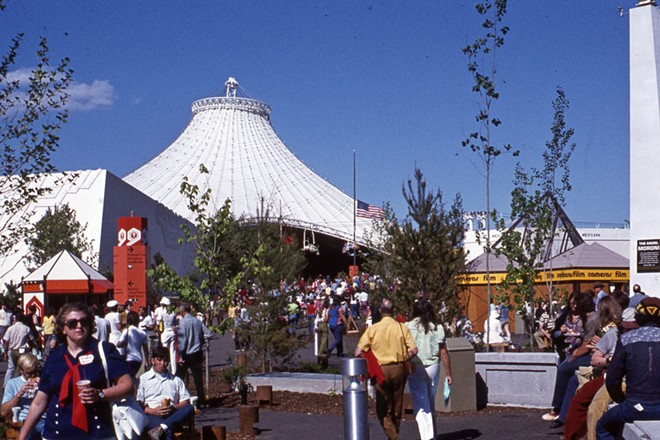 In exposition terminology the "residual" is what is left behind once a fair is over. In many cases, that's a flat piece of land — adorned in the most famous cases by a man-made artifact such as the Space Needle in Seattle from the 1962 world's fair or the Eiffel Tower in Paris from the 1889 world's fair.

When lecturing about Expo '74, I can't resist bragging that our residual is a renewed devotion to the Spokane River that started opening day, May 4, 1974, and endures to this day.

Our love of the Spokane River is all the more remarkable because of what an evolution it took to bring it back into our public consciousness. Go far back in time, about 150 years, and this was one of the most beautiful of any American river. To fully imagine that scene, you must walk in the forested countryside near Spokane to encounter the essential ingredient: Silence!

Try to imagine the impression the falls must have made on Indigenous people who lived here, along with pioneers traveling through the wilderness. Mile after mile, the only sound was the chirp of birds and the wind in the trees. Then, far in the distance came a new sound, first no more discernible than a gentle breeze, but growing louder and more insistent until at last the falls appeared. Now eyes and ears witnessed the most impressive site in all that vast region, a tumult of water dropping down, smashing past rocks and islands, sending spray high into the air.

Spokane's town builder James Glover was enthralled by the beauty of those falls when he encountered them in 1873 while exploring Eastern Washington, looking for a promising townsite. "I was enchanted — overwhelmed — with the beauty and grandeur of everything I saw," wrote Glover. "It lay just as nature had made it, with nothing to mar its virgin glory."

The falls were beautiful, yes, but they also meant water power — and profits and exploitation. Soon sawmills and grist mills would obscure the "virgin glory" of the falls. Bridges crossed the river and connected islets to the shore. Railroad tracks ran right beside the falls. Flumes pushed into the current, diverting the water into those mills. Trees were cut back to make way for buildings. Fill dirt eliminated at least one of the river channels.

At first this upstart settlement had been known as "Spokane Falls." But over time, a kind of scenic amnesia overcame Spokane, and the falls were forgotten. In fact, soon "Falls" was dropped from our name. Riverside Avenue was named with no regard to the fact that it never ran alongside the river. By the 1950s, the disregard for the river was so extreme that there was even talk of paving over the south channel for parking!

During the 1960s, local businessmen distressed by the loss of customers to suburban malls along with citizens eager for a more attractive city center joined together to discuss ways of recovering the glory of their river.

Of course, by then it seemed impossible to recover the falls. Thousands of tons of railroad tracks crossed the site; an industrial laundry belched soap suds into the river; Havermale Island was known for its railroad terminal, motel and parking lot; and Howard Street ran right through the island.

Over time, A kind of scenic amnesia overcame Spokane, and the falls were forgotten. In fact, soon 'Falls' was dropped from our name.

This week, on the 48th anniversary of the fair's opening, we can recall the heroic moment that Spokane chose an audacious plan to accomplish this transformation. The city by the falls would host a world's fair, and governments, countries and companies would get behind the effort and even help pay for the improvements.

To transform the site, an unimaginable amount of steel, stone and asphalt would have to be moved out. Then a stunning amount of fill dirt would need to be moved in to create hillsides on the site — and provide cover for Washington Street to run unseen through the park.

The effort was incredible. The leader and great visionary of the fair enterprise, King Cole, was busy flying across the country and around the world to line up fair participants. Cole spent so much time on planes, in fact, that as the story goes, once when he was fidgeting nervously in his barber chair in Spokane and was asked what was wrong, he replied, "I was looking for my seat belt!"

In just two years, Spokane will mark the 50th anniversary of Expo '74 and we can tell the story again about how we rediscovered our forgotten river and restored it to where it belongs, front and center, surrounded by our beautiful Riverfront Park. One more great "residual" of Spokane's world's fair is that we learned what can be achieved through hard work, great vision and community engagement. ♦

J. William T. Youngs, a history professor at Eastern Washington University, is the author of The Fair and the Falls, the definitive history of Expo '74.