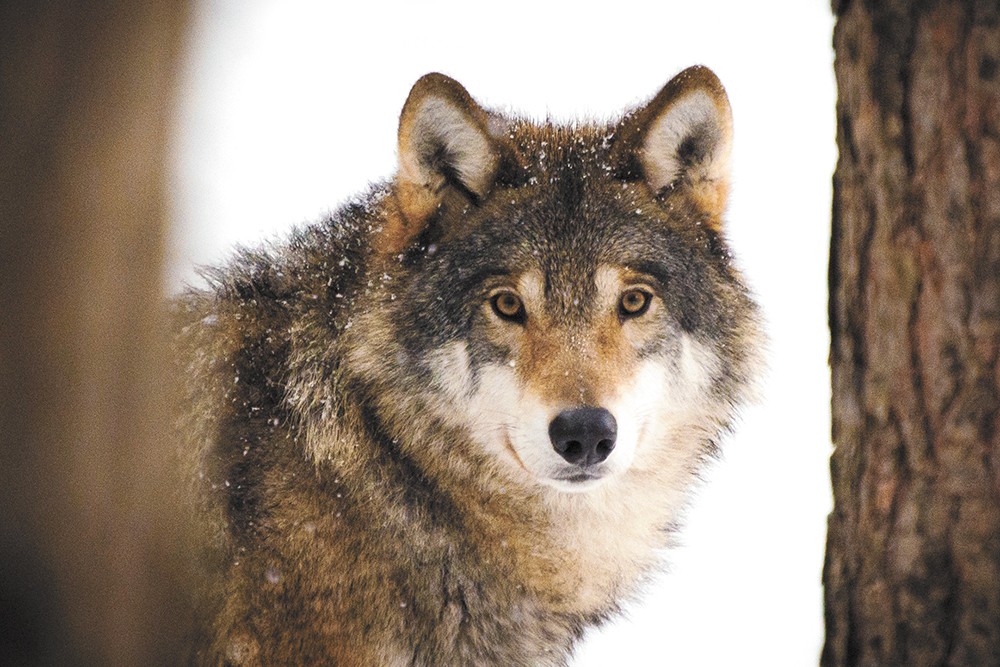 Wolves continue to divide northeast Washington — not just when it comes to policy, but also culture and values.

Matthew Konkle, a state Fish and Wildlife official stationed in northeast Washington, forwarded an email to his colleagues in September with a picture attached: A yellow "Pavement Ends" sign sits with a forest in the background. Stuck to the front of the sign is what looks like a customized bumper sticker: "WDFW = Enemy."

"The struggles in my district appear to be escalating faster than solutions are being provided by our decision makers," Konkle wrote in the email to the Fish and Wildlife executive team. "I strongly appreciate the moves recently taken to protect the safety of my staff such as addressing recent safety concerns with impending meetings."

At the end of the August, Fish and Wildlife announced it was canceling 14 meetings about wolf recovery because of safety concerns. An Inlander public-records request turned up a slate of angry rhetoric, much of it directed toward the Fish and Wildlife staffers.

In early August, the Center for Biological Diversity called its Facebook fans to action, warning them that, in the name of protecting cattle, Fish and Wildlife was planning to kill more members of the Old Profanity Peak pack in Ferry County. Despite the environmental group's attempts to filter out the uglier comments, death threats toward the Washington state department got through.

"Kill the state officials responsible for the crime," one commenter demanded.

Other comments on other pro-wolf Facebook pages featured similarly threatening comments, like "I wish someone, ANYONE, would shoot the sharpshooters!," and "Shoot them in the knee caps as they are not human."

Fish and Wildlife concluded that the best course of action was to cancel the public meetings and hold a series of online webinars instead. But while the cancellations were greeted with relief by some nervous Wildlife staffers, other groups reacted with cynicism.

"The state knows very well that the vast majority of people will come out to the hearing and tell them to stop killing wolves. They don't want that," says Kieran Suckling, executive director of the Center for Biological Diversity. "The state represented at the end of the day the interest of a small group of ranchers, but not the interests of the majority of citizens."

But Diamond M Ranch's Len McIrvin, one of the northeast Washington's most vocally anti-wolf ranchers, also saw conspiracy, but in the other direction.

"It had nothing to do with safety." McIrvin says. "Fish and Wildlife has an agenda and that's to put us out of business with the wolves."

You can trace Washington's fight over the fate of wolves and cattle to 2012, when Fish and Wildlife used a helicopter to kill wolves in the "Wedge pack," which the department concluded had been eating McIrvin's cattle.

To environmentalists it was an atrocity — seven different conservation organizations sent a letter to the governor condemning it. But to conservatives like Steve McLaughlin, who once ran for state commissioner of public lands, the state's policies have been "hog-tying" ranchers' ability to pursue a more aggressive removal of wolves.

"Bottom line is, they want us off the land," McLaughlin said at last year's Marble God and Country rally in Stevens County, arguing that wolves were being intentionally used by "the communists and the New World Order ... to depopulate the West."

In 2013, Fish and Wildlife tried to bring together ranchers, environmentalists and hunters as a part of a Wolf Advisory Group to develop clear standards for when a wolf pack needed to be killed, says Donny Martorello, the state's wolf policy lead.

"The ideas that we put on the table, everybody hated," Martorello says. "We thought, 'Hey, everybody dislikes us and we're in the middle and that puts us in a good spot.'"

But Martorello quickly realized they were wrong. If anything, the mutual distrust of his agency was exacerbating the tensions.

Each time wolves were killed, a national outcry would follow, unleashing a flood of phone calls, emails and comments on social media that went from angry to downright sinister.

"We've had staff take it to the level where they needed to change how they look, change their hairstyle, grow out their hair, because of their concerns for their personal safety," Martorello says.

A few years ago, Martorello says, he got a series of "I'm coming for you" emails from someone angry about Fish and Wildlife killing wolves. It concerned him so much he put his family in a hotel room for two days.

The fights aren't just about policy, Marterollo says, but also about culture and values.

"On the surface, it's about the lethal removal of wolves," says Martorello. "But there's a deep-rooted identity-based conflict beneath that."

The agency spent $1.2 million over three and a half years to bring in a nonprofit to begin to heal the divide, according to the Washington Post. Francine Madden, executive director of what's now the Center for Conservation Peacebuilding, tried to mend some of the underlying wounds hobbling the debate.

The strategy: Set the wolf-and-cattle issue aside at first, and help each side build relationships and understand each other.

"There were so many moments where people amazed themselves that they could engage in this constructive problem-solving and come up with stuff that they could live with," Madden says.

Madden helped the Wolf Advisory Group find consensus, developing a new standard for how the state should handle conflicts between wolves and livestock, getting some ranchers to agree to deal with wolves through non-lethal methods and some conservationists to sign off on wolves being killed in rare circumstances.

The problem? Some participants found themselves targeted by those on their own side for being sellouts.

Chase Gunnell, spokesman for Conservation Northwest, says that they've "received threats for collaborating with ranchers and agencies," generally from "hardcore environmentalist" groups out of state.

Meanwhile, on the other side, you have some northeastern Washington ranchers like McIrvin, who blames Fish and Wildlife bureaucrats for inciting death threats against him and refers to environmentalists as "animal worshippers" and "degenerates."

"I don't care if everybody in Seattle says they want wolves, I still have a constitutional right to defend my property," McIrvin says. "I have every right to eliminate those wolves."

The rhetorical climate, Madden argues, is a reflection of the national climate of zero-sum partisanship.

"If your take is, 'It's my way or the highway' and you try to annihilate the other side, then you're probably going to be disappointed when society comes together," Madden says.

STILL IN THE HUNT

For all the progress that Fish and Wildlife officials felt they made over the last few years, it didn't prepare them for a month like August.

That's the month when wolf advocates successfully won an injunction to stop the state from killing more members of the Old Profanity Peak pack — but just hours earlier, state officials had killed almost all remaining wolves in the pack. That same month, the Stevens County Cattlemen's Association offered a $15,000 reward for information leading to the identity of the person allegedly shooting cattle, suspecting retaliation for wolf deaths. The month ended with the announcement that they were cancelling the wolf meetings.

Still, the department plans to schedule wolf meetings next year. They haven't solved the conflict that has spanned generations, Martorello says, but today he feels like they have the tools to begin to try.

"There were many people who get into this business because they like to get outdoors and like to deal with wildlife," Martorello says. "We weren't necessarily trained for the social conflict of this." ♦

CORRECTION: The original version of this story misidentified the advocacy group that won an injunction temporarily protecting the Old Profanity Peak Pack.