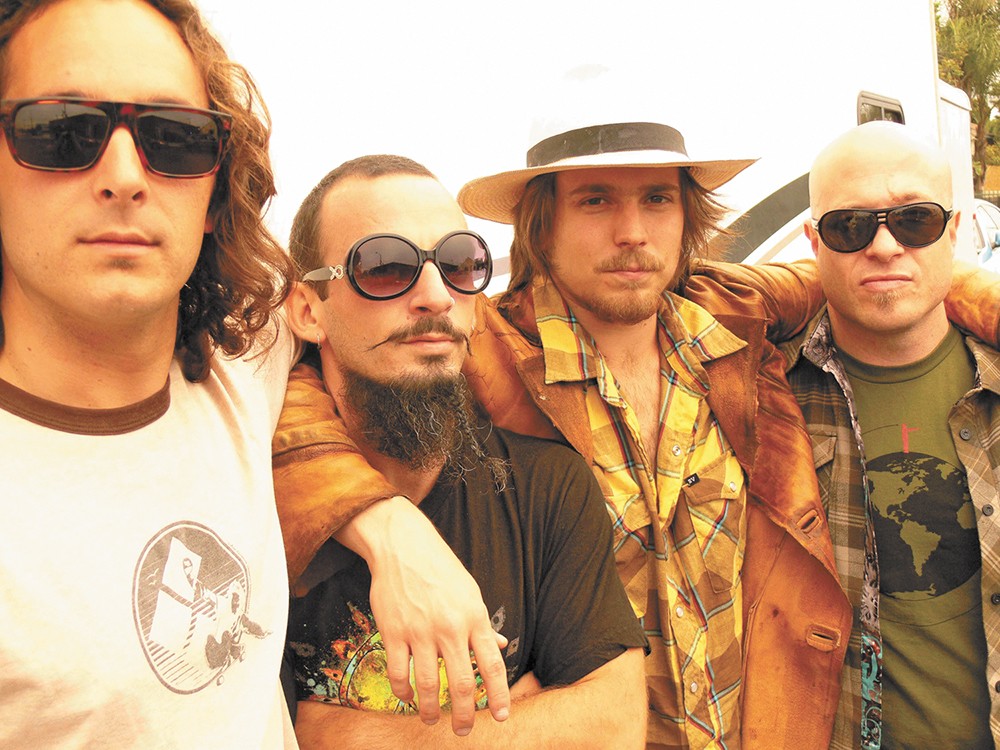 Lukas Nelson (in the hat) and Promise of the Real recorded an album with Neil Young and are now on tour with him.

Lukas Nelson met his Promise of the Real drummer Anthony LoGerfo at a Neil Young concert. His band's name was taken from Young's song "Walk On," and the group's style and socially conscious lyrics draw inspiration from Young. Last year, the band was invited to play along with the legendary rocker at a concert protesting the Keystone XL pipeline in Nebraska. Soon after there was an email: Young wanted to work with them on an album; were they available?

"It's pretty amazing how everything has come full circle," Nelson says from Los Angeles last week.

Nelson, 26, realizes that he's had it easier than some getting into the music business. His father is 82-year-old outlaw country legend Willie Nelson. The first song Lukas wrote as a 10-year-old ended up on one of his dad's albums. He started touring with Willie at age 13, playing rhythm guitar. But carrying the weight of being a famous musician's son, he's had to prove himself.

"I definitely feel like I've had a lot more open to me," admits Lukas, with a slight Texas twang. "But when I have those opportunities and then get invited back, that's when I know what we're doing is right."

Lukas has known Young distantly for most of his life. Through Promise of the Real playing Farm Aid — the annual benefit concert organized by Willie, Young and John Mellencamp — Young had noticed the band's progression over the past few years, Lukas says. Yet getting that initial invite to collaborate with Young was a shock. In some ways it still is.

"I pinch myself every day. It continues to be real... so far," Lukas says.

For the new album The Monsanto Years, Young wrote the songs while the band — including Lukas' younger brother Micah, who normally plays in Insects vs Robots — wrote their own parts.

Lukas is conscientious on the phone, not overly vocal about what it's like backstage with Neil: "He's very happy, and we're all in a good mood." Or what it's like to jam with his dad: "I'm always glad to play with Dad."

But when it comes to his music, he opens up. In preparation to tour behind the record, the band had 80-some songs to learn; some were deep cuts not played at concerts in years. Promise of the Real didn't get to practice all of them, either; sometimes the first run-through was on stage in front of thousands of fans this summer.

"Neil's got a lot of songs, and they're all great. We're pretty well-versed in his music, but there's always more to learn," Lukas says. "The language of music after a while as a musician... learning the music can be easy if you listen to it. Most of his songs are written with an intuitive general structure. Neil's not trying to scare anyone with crazy chord changes, but it's progressive. He made it easy on us."

After working hard since 2008, the group is finally in the process of being signed to a major label. According to Lukas, this deal has come their way with Young's help. Lukas says his band is glad to be Young's newest muse. The singer-songwriter has a penchant for working with musicians whenever the fancy strikes — Crosby, Stills and Nash and Crazy Horse, of course, but also Pearl Jam for the 1995 album Mirror Ball.

"That's definitely good company," Lukas says. "In so many ways I feel like we've matured quite a bit working with Neil this past year. Especially songwriting-wise, every show we get better and better."

Lukas, son of makeup artist Annie D'Angelo, whom Willie married in 1991, says that at home in Texas or Hawaii there's constant music. People are playing, singing and writing. Otherwise, they're out playing golf. But being home is rare as Promise of the Real, technically based in California, is constantly touring.

The cowboy/hippie/surf-rock act was most recently in Spokane putting on a crazy show at Gleason Fest 2014. Friday night, as part of the Rebel Content Tour, the group takes on the Spokane Arena.

"Epic, just incredible," says Nelson of the gigs thus far. "Every time on that stage we're just blown away."

The show begins with acoustic material and moves into a hard-rock jam session by the end of the night. In some cities the group has even gone over their time limit, having to pay thousands of dollars worth of fines.