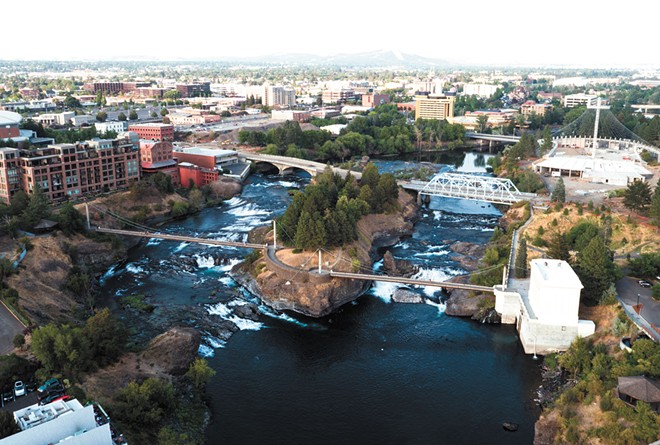 James Nisbet photo
The future health of the Spokane River is being watched very closely, as Washington regulators figure out how to tackle one of its most complicated pollutants.

Last week, the state Department of Ecology held a daylong workshop in Spokane Valley to discuss how to get the five main dischargers of PCBs (polychlorinated biphenyls) into the river in compliance with a stringent state water quality standard.

All five dischargers — Inland Empire Paper, Kaiser Aluminum, the wastewater treatment plants for the city of Spokane, Spokane County, and Liberty Lake — have applied for a variance from that water quality standard, which limits PCBs to 7 parts per quadrillion, saying it's not possible to meet right now.

If granted, the first-of-their kind variances would allow the five to keep dumping higher than legal limits of PCBs into the river, while taking steps to reduce them over time.

Before signing off, Ecology is doing an environmental impact study to look at alternatives and understand the financial and environmental consequences of the various options.

Even though PCBs were banned in the '70s, they're inadvertently created in many consumer products, oils, paints and inks, and other chemicals used in manufacturing processes. They can be toxic to aquatic wildlife and cause human health issues.

At Thursday's public meeting, Ecology employees made the case that with federal limits on consumer products not lining up with water quality limits, the best way to actually reduce PCBs for now is to offer the variances. A variance, they say, can only get more strict over time, and will need to be re-evaluated after five years.

But not everyone is convinced that's a good route forward.

"I still do not have any confidence that this process is any more than an end run around the Clean Water Act, and a delay in stopping the pollution that we do have control over, to some degree," Spokane Riverkeeper Jerry White says after the meeting.

Here, we take a deeper look at a few of the main hang-ups that will need to be addressed.

HOW LONG DOES THE HALL PASS LAST?

One of the main questions raised is if variances are granted, how long would the five dischargers get a pass on meeting state or federal standards?

Well, it depends on who you're talking about.

Ecology is creating a separate "path" for Kaiser Aluminum, which in its application asked for a 13-year time frame to install the same level of expensive and precise water treatment technology that the other four already use or are about to use.

But isn't the problem that the current technology isn't reducing PCBs to the limits? Isn't that why the other four are also asking for more time?

While it remains to be seen just how well the technology, sometimes called "next level of treatment" will reduce PCBs, it is true that the other four dischargers still don't think they'll meet the strict limit any time soon. They've asked for closer to 20 years to get there.

So going back to Kaiser, what happens if they take 13 years only to get to the same point other people are at now?

At that point, Kaiser could potentially ask for another variance, Ecology's Pat Hallinan said.

That, White says, is exactly the fear for him and others who want to see the health of the Spokane River improve: a variance process could potentially act as an indefinite way to avoid meeting the limits the state set in the first place. Importantly, White says he thinks sticking with the state limit would drive technology to be created, rather than kicking the can decades down the road.

"I don't think the accountability for ratcheting down pollution at the end of the pipe is really there with these variances," White says. "Who’s policing those timelines, and what are the criteria being used to enforce those timelines, or set up those enforcement timelines?

"I have real serious concerns that Ecology simply does not have the will to hold dischargers accountable to make the painful choices and spend the money, i.e. to go out and figure out how to ratchet down pollution," White continues.


But say Ecology were to go with another tool called a "total maximum daily load," which would set limits based on the entire waterbody, not individual pipes. To hold people in compliance, PCBs would simply need to be below the currently accepted Environmental Protection Agency test, which is only sensitive enough to measure about 50,000 parts per quadrillion, Ecology's Cheryl Niemi explained.

"The message here is really that this focus of doing a variance provides a path forward for Ecology and the regulated entity," Niemi told Thursday's audience. "We're working toward seven. ... Variances can be shortened or terminated if they're not working out."

The state's current PCB limit under the Clean Water Act, often expressed as 7 parts per quadrillion, is intentionally small for the bioaccumulative toxins, which can be difficult to comprehend. For scale, Ecology representatives say that's about the same as seven postage stamps in an area the size of California and Oregon combined. Current lab tests can only reliably test down to about 50-75 parts per quadrillion, and less reliably down to about 30 parts per quadrillion, Niemi explained during last week's event.
One of the main pieces Ecology staff are working on is creating a numeric way to limit the dischargers' release of PCBs, which would be enforced on their new permits. The measure they'd be required to meet would be based on their "highest attainable condition," essentially the best level of PCB reduction they're actually going to be able to meet with current technology or brand new technology they'll be installing within the next year.

There are a few things likely to make that number wishy washy.

First, the limitations of lab testing. When asked whether the highest attainable condition could be set lower than what's currently measurable, the answer was essentially no. It needs to be testable for dischargers to be held accountable, Niemi said.

What could happen instead, as outlined in the staff discussion, is a requirement that a discharger reduce their release of PCBs by a certain percentage over the timeframe of the permit. Most of them are hitting hundreds to thousands of times the actual state water quality standard at the moment.

White says he's not sure it's best for the river to set different numerical limits for each polluter. In fact, it solidified for him that the best option might be to look at not dumping polluted effluent into the river at all, something Ecology outlined in a few "alternative options."

"I think what’s happening here is society is still operating where there’s arguably a medieval paradigm: If you've got garbage, dump it in the river," White says. "Now we're producing garbage that is no longer disposable. You can't throw away bioaccumulative toxins. They build up in fish and orcas and people. They hurt people and other organisms, so we have got to start looking at another model."

As part of its environmental impact work, Ecology has to include alternatives other than offering a variance.

Ecology will spell out the pros and cons of four main alternatives, according to Diana Washington of Ecology's Water Quality Program.

"None of the actions evaluated left the dischargers in the river as currently permitted," Washington said. "The important takeaway is we're still working through this process."

The alternatives being explored include: some sort of regionalized treatment instead of individual treatment, zero discharge into the river, using the polluted effluent for reclaimed water uses instead, or discharging in another location.

For the options that would take the polluted discharge out of the river and put it elsewhere, a ton of land would likely be needed, Washington explained.

"We often hear, 'Why don't we just take the wastewater out of the river, and put it somewhere else? Don't discharge to the Spokane River, and then the PCBs don't get into the fish,'" Washington said. "If lagoons were chosen for the city of Spokane flow, at 50 million gallons a day, and assuming the lagoon depth could be 18 inches ... you would require approximately 37,000 acres or 57 square miles of evaporative lagoons. The city of Spokane is approximately 69 square miles."

Putting the water on golf courses or other reclaimed uses also would just move the pollutants around, in some cases putting them onto land where they could later get into the river system, Washington said.

But to White, it doesn't logically make sense to say that moving PCBs onto land would be a worse option than dumping high amounts right into the river.

"For Ecology to say, 'We don't want to throw PCBs everywhere,' it's really irresponsible. That's not what we would be talking about if we had evaporative ponds, or golf courses we were watering," White says. "When you dump them into aquatic ecosystems, into closed systems, they have nowhere to go but up the food chain."

Last week's marathon meeting, which lasted from 9 am until about 2:30 pm, was the only scheduled public meeting set to take place before Ecology releases its draft environmental impact statement at some point in the spring.

However, if people want more public meetings, say in the evenings when most people are off work, Ecology would consider holding more sessions, Water Quality Program Manager Heather Bartlett said.

White says it's essential for the public to pay attention to and participate in this process, as it not only sets the standards for the Spokane River in coming decades, but also potentially sets precedent for other parts of the state and the country.

"We need more opportunities to comment on this fundamental change to disposing of effluent, and we need demystification: We need this explained in plain language," White says. "And, I believe this should take more time."

More information on the process can be found on Ecology's website.