Thor: Ragnarok embraces its comedic side to enhance the comic-book fun 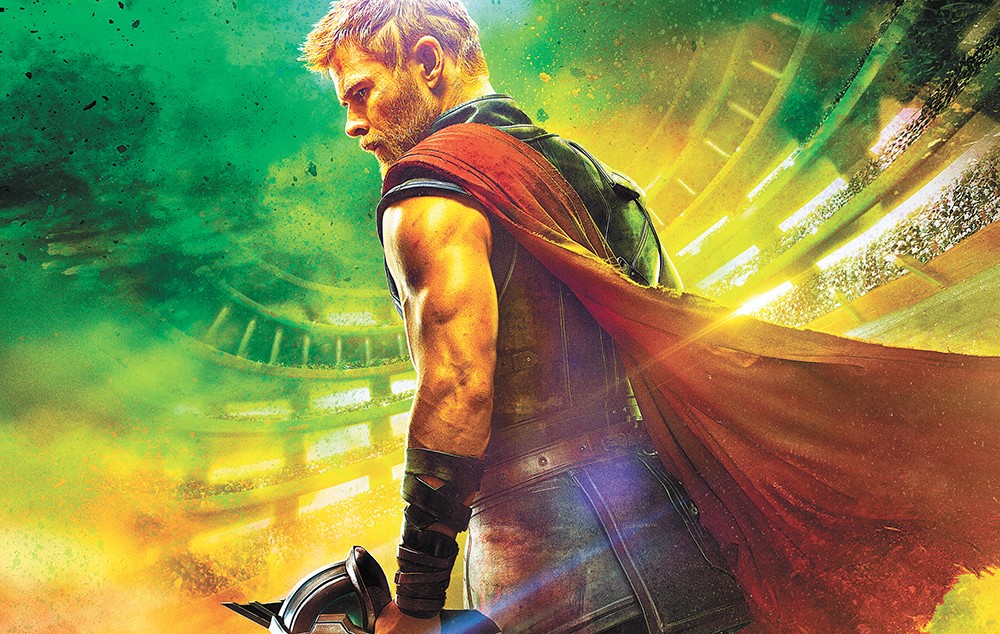 With Kiwi director Taika Waititi on board, Thor: Ragnarok really brings down the hammer on comedy.

There are a lot of ways to start a standard superhero movie:

"I know what you're thinking," proclaims the God of Thunder. "'Oh, no! Thor's been captured!'"

It's immediately followed by a bit undercutting established superhero movie conventions, where a chained Thor repeatedly tells a pontificating supervillain to pause his diatribe because the chain keeps spinning him out of view.

While the first Thor film was solid and Thor: The Dark World was a forgettable slog, the third installment makes Chris Hemsworth's titular hero less of an untouchable god and more of a wisecracking protagonist à la Spider-Man or Rocket Raccoon. Really, Thor: Ragnarok takes the Guardians of the Galaxy approach of turning the proceedings into an intergalactic action comedy.

The story follows Thor's attempts to protect his home of Asgard from its prophesied apocalypse known as Ragnarok. The task takes a bleak turn when Thor finds out he has an ultra-powerful, evil older sister, Hela the Goddess of Death (Cate Blanchett), who his father Odin banished years ago. Within minutes of meeting her, she makes her designs on the Asgardian throne clear, effortlessly destroys Thor's thought-to-be-indestructible hammer, and casts Thor and his trickster brother Loki (Tom Hiddleston) onto the planet Sakaar.

Thor soon gets captured by a drunkard mercenary named Valkyrie (Tessa Thompson), who brings him to Sakaar's ruler, an eccentric oddball named Grandmaster (Jeff Goldblum). He loves nothing more than placing strong new captives into his interdimensional gladiator battle ring, which is where Thor violently runs into his old pal Hulk (it was clearly supposed to be a big reveal, but they ruined it in the first trailer). So Thor must find a way to try and convince Hulk (possibly with the aid of Valkyrie and/or Loki) to escape Sakaar and return to Asgard to battle Hela.

Despite his ripped musculature and intense stares, Ragnarok proves that Hemsworth actually works best as a comedic actor. He excels at being the simultaneously overly confident and overly self-correcting beefcake who's always trying to spin things to put him in a godly aura. But the humor stretches well beyond the thunderous one: Asgard hosts an absurd star-cameo-filled play glorifying Loki, Goldblum's Grandmaster offers both quirk and deadpan deliveries, and the simpleton blue rock creature Korg (one of Thor's prisoner peers on Sakaar) bemoans how he failed to start a revolution via pamphlets.

While Eric Pearson, Craig Kyle and Christopher Yost put together a lively script, it's hard to not give a ton of credit to director Taika Waititi, who made his name with the beloved New Zealand comedies What We Do in the Shadows and Hunt for the Wilderpeople. There's only one downside to the injection of humor: The moments of heavy exposition or serious action kind of feel like a drag in comparison. Whenever there's a life-or-death battle or a diatribe from Hela, it makes one yearn for more time palling around with Hulk or Korg.

Despite this hindrance, Hela's rationale for her actions leads to one of the deeper, more resonant themes explored in the Marvel Cinematic Universe: the whitewashing of violent and brutal history. She wants her place at the throne because she was the right-hand woman who helped Odin establish Asgard as the head of the Nine Realms, and she did so through war and vicious bloodshed. But when she got out of hand, Odin banished her and literally covered up the actual history with a warm and sunny narrative of peace and prosperity among the Realms. (I wonder if powerful white people have ever done that in our history? Hmmmmm...)

The cast has a blast with their over-the-top roles. While the MCU takes rightful scorn for removing so many good actors from the headier film workforce, it's delightful to see Blanchett voraciously chewing up scenery as Hela. She revels in every manic moment of flamboyant villainy. Grandmaster allows Goldblum to fully lean into his weird energy and reach amusing new heights as a pseudo-bad guy. As the kind and dimwitted warrior Korg, Waititi manages to steal his own movie, serving as the highlight of any scene he enters.

Thor: Ragnarok makes the case for letting creative people move outside the standard cookie-cutter mold of blockbuster franchises. Bringing in Waititi to direct shakes up the formula just enough to make it feel fresh again. The movie basks in being silly and larger than life, and that's a great thing for a comic book to be. ♦

Thor: Ragnarok is not showing in any theaters in the area.