A local nonprofit has given a homeless camp a community of tiny houses in Olympia — could they do the same for Spokane? 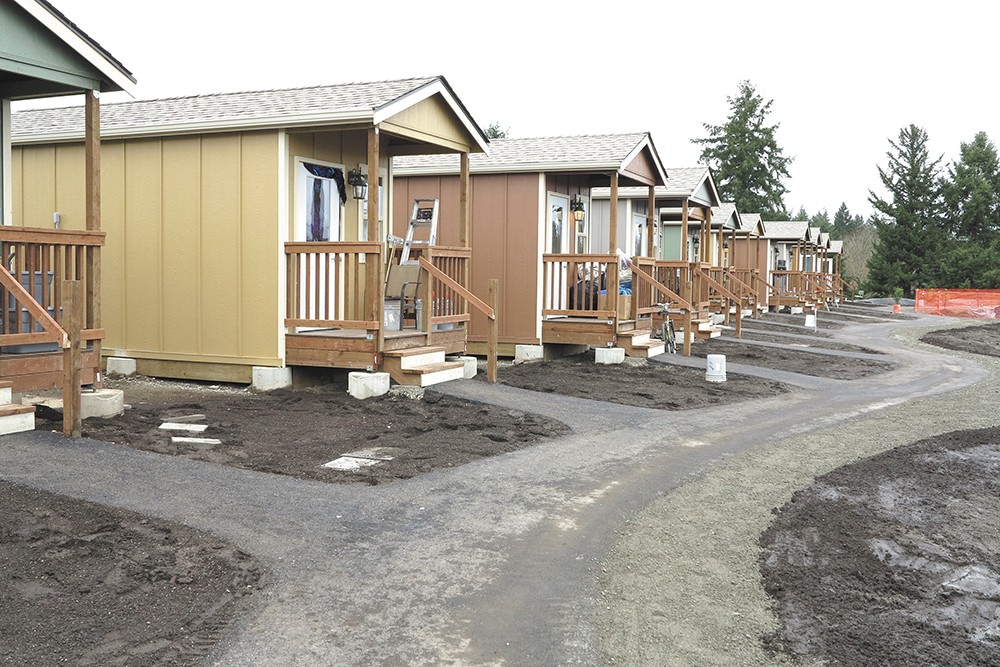 Tim Ransom
The residents at Olympia’s Quixote Village give input into nearly every facet of their community.

Shelter is shelter, no matter how small. And in the 30 brand-new homes at Olympia's Quixote Village — named after a Paris tent city that drew inspiration from the classic Spanish novel — the shelter is pretty darn small. With interiors of only 123 square feet — not much larger than a typical office cubicle — they're just big enough for a simple bed, small table, chair and half bathroom.

But for formerly homeless residents, like 57-year-old Robert Bitner, they're a huge upgrade.

"Compared to what we had ... a tent in the woods, or space on the sidewalk, it's a definite improvement," Bitner says. He had been living in "Camp Quixote" before the buildings were constructed, sleeping in a sleeping bag in a carport. Every three months, he'd have to move.

All that chaos hastened his slide into depression. "It was like you didn't have energy and you were too confused to do anything. My memory was going. I'd forget stuff," Bitner says. "I couldn't get a regular shower. It was hard to get clean clothes and food and stuff."

But today he has his own house, with curtains, carpet, a closet and a hot-water heater. He sees a counselor and receives medication. And with tenants only required to pay 30 percent of their income in rent, the Quixote Village residents — many suffering from mental illness or drug addictions — have an average bill of just $77 a month.

"I feel safe," Bitner says, "I can sit and just think and just try to figure things out without a bunch of people and a bunch of noise." Other times he sits on the porch outside and mingles with the other residents walking past, or watches the ducks swim in nearby ponds.

This village, developed by Spokane and Bremerton nonprofit Community Frameworks, has drawn a torrent of media attention in the past few weeks, including ABC's Diane Sawyer, MSNBC, the New York Times and Al Jazeera America. This idea of low-income micro-housing has been spreading — with similar experiments popping up in Eugene, Ore., and Fresno, Calif.

"The separate space gives them the dignity and privacy to retreat when they need to," says John Fisher, vice president of production and Spokane operations for Community Frameworks. "Living together in a community helps them to be engaged, [and gives them] friendships and purpose."

And it's not just that. With a total cost of only about $88,000 per unit compared to the $200,000 per unit it takes to construct a traditional apartment complex, Quixote not only gave the residents more autonomy, it was cheaper than the alternatives.

Fisher sees opportunity and possibility: He would like to see this model — tiny homes for needy people — replicated in Spokane.

Creating a Quixote Village for Spokane faces major hurdles. The biggest, as always, is financial. Back in the '90s, the national strategy for combating homelessness began to shift. Instead of wrestling with the ills of addiction, unemployment and mental illness first, agencies would focus on giving the homeless homes. Once they had a place to live, then the full force of social service agencies started tackling the other problems.

Though the strategy has seen great success, it's meant a redirection of resources away from homeless shelters. And as the recession shook budgets, even funds for new housing were slashed.

Federal community block grants contributed $700,000 to Quixote Village, says Ginger Segel, the senior housing developer for Community Frameworks, but those funds have been slashed by 22 percent since 2010. "It's really gone under the axe," she says.

And the state Housing Trust Fund — a source Community Frameworks failed to get money from last year to build new housing for mobile home park residents located near Fairchild Air Force Base — has been cut 45 percent since 2010, she says.

"We used to have a very robust Washington Housing Trust Fund. [Spokane hasn't] had a project funded since 2011," Fisher says. "We're working with hardly any resources." More problematic, many organizations want to see some funding already in place before giving grants: The less funding nonprofits have, the tougher it is for them to get more.

But the low price of tiny houses means that, practically speaking, they may be the fastest option for new housing. In Spokane, low-income housing is scarce: In July 2013, the vacancy rate was less than 3 percent among Spokane Low Income Housing Consortium members. For deeply subsidized units, the vacancy rate was even lower — 1.6 percent.

"We can't build our way out of this. It's very expensive to build," says Cindy Algeo, the consortium's executive director. "We want to keep building and offering more units. But that's a fairly slow, not very responsive process. It takes usually 18 months to two years."

She sees other options, like offering housing vouchers or spreading Housing First programs throughout the community, as crucial.

Fisher has in mind locations, even community partners, that he thinks could help build tiny houses to Spokane, but says it's far too early to name names. "We could get some good density, fairly close to the downtown area where services are located," Fisher says.

Successes like Quixote Village, however, are hard to reproduce. Quixote Village is unique: It's self-governed. Current residents help make the rules and vote in future tenants.

The community developed gradually, beginning as a homeless encampment. For years, the tent city traveled from parking lot to parking lot, through seven different churches, winning numerous allies along the way.

Spokane has had its own tent cities briefly pop up downtown. But instead of open arms from local churches, they've drawn a stern response from city officials. In 2004, under Mayor Jim West, a city ordinance banned encampments on city land. In January 2013, a group of homeless campers beneath I-90 downtown were told to pack up and leave.

In Olympia, by contrast, a nonprofit named Panza, after Don Quixote's down-to-earth squire, sprung up to mobilize aid and support for the camp.

Instead of a sleepy suburbia, Quixote Village was placed inside two acres of an industrial park. But even then, their industrial park neighbors attempted to fight back legally, Segal says, arguing that the industrial noise would cause problems for the residents.

Today, that concern seems silly to Bitner. "There's less noise than there was in any of our [other] campsites," Bitner says.

Olympia had widespread community support from governments, businesses and nonprofits, and more than three years of hard work to get past those challenges. Spokane would probably need the same.

"If folks feel that this makes sense, that this is a good way for people to get off the street, I think that's what it's going to take," Fisher says. ♦