were on their way home to America.

On April 11, 1912, Rice and her five boys, ranging from age 2 to 10, boarded the brand-new ocean liner RMS Titanic in Queenstown, Ireland, bound for New York City and then their final destination, Spokane. The 39-year-old Irish immigrant and widow, whose husband had been killed in a rail yard accident here two years prior, purchased third-class tickets for herself and the boys.

We know now that, as third-class travelers aboard the doomed ship, the odds of the Rice family getting home to Spokane were against them — just over a third of the 2,228 passengers and crew made it onto lifeboats — along with more than 1,500 victims of the catastrophe on the night of April 14, 1912, when the "unsinkable" ship struck an iceberg. In the early hours of April 15, it slipped beneath the frigid waters of the North Atlantic.

The sad story of the Titanic is well known, thanks to popular culture's ongoing fascination and romanticization of its unimaginable fate: the largest ocean liner of its time, made possible by the latest advancements in engineering and technology, lost on its maiden voyage.

Now, visitors to the newly arrived touring exhibit Titanic: The Artifact Exhibition, which opened last weekend at Spokane's Northwest Museum of Arts & Culture, can take an interactive journey that explores why the Titanic's story has remained so relevant, while also reminding us of its many victims and survivors — all of their hopes and dreams, dashed by tragedy. 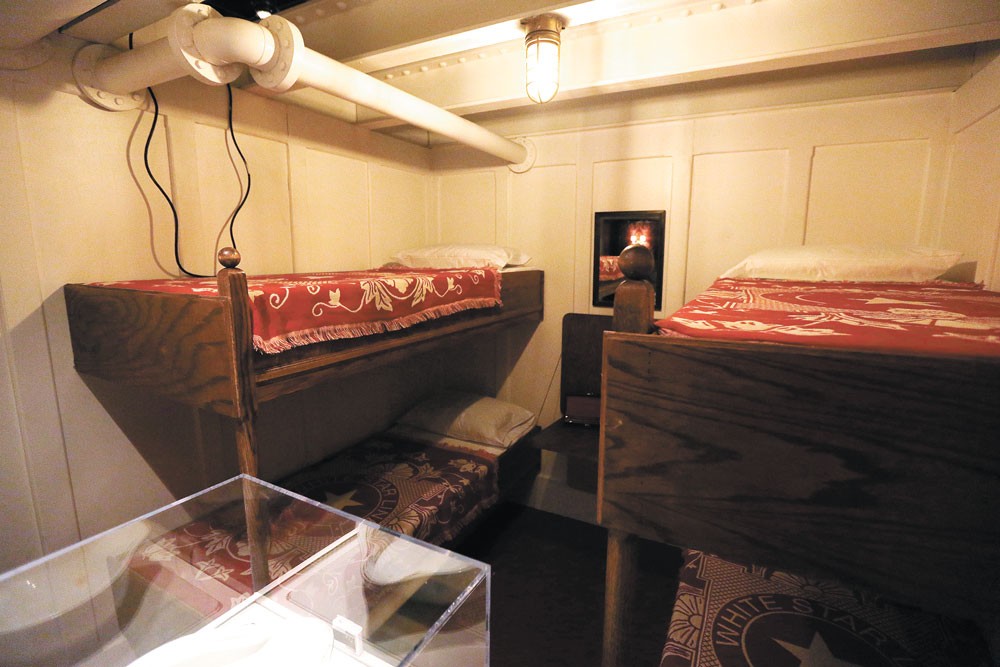 Young Kwak
A replica third-class cabin is part of Titanic: The Artifact Exhibition.

owner of the subsidiary RMS Titanic, Inc., which holds exclusive rights to the preservation and recovery of items at Titanic's wreck site, the exhibit fills four museum galleries and features dozens of items salvaged from the ocean floor, including personal effects — clothing, jewelry, keepsake trinkets, documents, toiletries — items outfitted on the ship for passengers' comfort, and pieces of the vessel itself. Guests can also see re-created cabin accommodations for the Titanic's first- and third-class passengers, the latter of whom enjoyed higher quality lodgings than what was typical for the period.

"What's interesting is that, in most cases, the quality was higher than in most ships," explains MAC senior history curator Marsha Rooney as she walks through the exhibit.

"Even third class had perks like electric heat and light, and second class was a lot like first class in some other ships. ... So in a way, the idea of steerage and of people packed into the hold doesn't fit with the Titanic," she continues. "You hear the first-class stories, but you're not thinking about the fact that it was also moving mail and helping immigrants make their way across the ocean."

Though the main exhibit opened last weekend, Rooney and other museum staff are now working on a forthcoming gallery showcase on life in Spokane, circa 1912. Set to open Nov. 4, this special local tie-in will feature pieces from the museum's local history collection, including high-end fashions of the period and local newspaper coverage of the sinking.

Rooney says visitors will also be able to learn more about Titanic passengers who had Spokane connections, like the little Rice boys and their mother, along with newlywed childhood sweethearts John and Sarah Chapman, returning to his home in Spokane after being wed in their native England.

Historical records indicate that as many as nine passengers aboard the Titanic, all traveling in second or third class, had declared a final destination of Spokane.

As visitors to Titanic: The Artifact Exhibition

arrive at the museum's ticket desk, they receive a "boarding pass" slip bearing the name and a short biography of an actual passenger who traveled aboard the ship. In the exhibit's final gallery, as solemn, haunting music plays in the background, guests are met by a large memorial wall listing the names of each person on board, sorted by whether they survived the disaster or were lost to the icy sea.

More so than anywhere else in the exhibit, this final visual element profoundly illustrates the slim chance people had of making it onto one of the ship's limited number of lifeboats. Feeling hopeful, visitors are likely to scan the alphabetical survivor list for their passenger's corresponding ticket class, only to find that person's name absent. Just maybe, they're one of the lucky ones.

"I love the way [Premiere] personalized it with so many human stories," Rooney says. "The goal is to get people to really imagine being there, which is a really wonderful and neat technique for visitors to a museum. It can feel like things are in a case, and sort of separate from ourselves. I think this exhibit does a good job of getting you to really imagine yourself right there."

Beneath all the excitement surrounding the Titanic — a sentiment shared as it first set sail more than a century ago, that lasts even now as researchers rediscover its fragmented fate scattered across the seafloor — this carefully curated exhibit of artifacts and stories seamlessly unites the contrasting sides of Titanic's legend, of marvel and of sorrow.

One of these countless reflections of sorrow is found at the end of a long list of third-class passengers who perished that icy April night: the names of the five Rice boys; Albert, George, Arthur, Eric and Eugene, and their mother, Margaret.

"There is so much to observe about the Titanic," notes Rooney, in a nod to the lasting wonder of the magnificent liner.

"There is a story of finding it, saving it and all the biography. It comes to life where other [ships] did not... Plus, the hype with this ship was phenomenal. It was the biggest, the best — they did their marketing very well — so the drama was enhanced by that." ♦