To Be a Tree

Nestled in the valleys

of mountain ranges all around, the Inland Northwest is home to millions and millions of trees. Even within our metropolitan boundaries, they fill our parks, line the streets and shade our backyards. Ever the urban sentinels, these living beings bear witness to all manner of things; some, because of age or location, perhapst more than others. To recognize and share the importance of these local trees, the city of Spokane's Urban Forestry department created the Heritage Tree Program almost two decades ago. The program's registry, implemented in 2009, now lists 18 specimens, recognized for having historical significance, being of significant size or displaying high-quality aesthetic characteristics of their species. Most of these trees are in public parks and in the city's oldest neighborhoods. City Urban Forester Angel Spell hopes to see more interaction from the public, who can nominate trees for inclusion on the Heritage Tree Program registry; trees like the following notable listings:
click to enlarge

One of the three Ancient Ones

In the shadow of the first of the three elder Douglas firs, signs of death. Atop the thick forest carpet of needles, sun-bleached metatarsals and a femur is all that remains of a graceful wild rabbit. The Ancient Ones, as the old-growth grouping is named, bore witness to this act of slaughter, a regular occurrence in the forest's circle of life. In a stand of evergreens lining a sheer precipice above the bubbling Indian Canyon Creek, these three have towered over the landscape for nearly 200 years. More than a century back, the ostracized Chief Spokane Garry spent his final days in the surrounding woodland. One of the looming firs bears the charred black evidence of flame across its sap-stained trunk. Evolving to withstand the test of time, defying the whims of Mother Nature, the Ancient Ones are the three wise men of the forest. (Located in Indian Canyon Park; accessible by trail off of Greenwood Road)

A gatekeeper at the southeast corner of South Perry's Grant Park, its canopy reaches toward a blue sky filled with small, pillowy clouds that mimic its shape. They're the kind of clouds that kids draw, a flat line to mark the bottom, with a scalloped top of curved lines to indicate the fluffiest of cumulus forms. Like the clouds above, this magnificent horse chestnut laden with spiky green fruit also happens to be of ideal shape: a straight, stout trunk topped low with a full, wide canopy. Fleeting and at the whims of atmospheric activity, the clouds are jealous of this tree's static nature: It's been firmly rooted right here for almost 100 years. The clouds are only temporary. (Located at 1300 E. 11th Ave.) 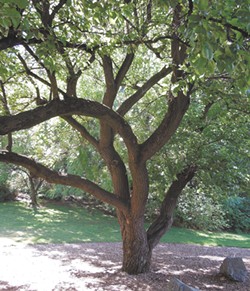 Who knows the last time there was fruit? Spokane's Urban Forestry department thinks this tree might be too old — a tired grandmother tree — so no one expects it to reproduce, encasing its offspring in the juicy, sweet flesh of clefted fruit. Planted not long after the adjacent mansion was built in 1898 for railroad tycoon Daniel C. Corbin, the rare apricot is remarkable now for its age, size, and for being an apricot tree. They're not common in this evergreen town. If age has improved the specimen in any way, it's made Corbin's tree into an excellent climbing type. But, remember, it's a grandma tree, so adventurous ones probably shouldn't climb its low, curving branches. Instead, be like the kids in the park today, running to and fro in the grass below for a game of tag. (Located outside the Corbin Art Center, 507 W. Seventh)

Like marmots and lilacs, our love for the ponderosa courses deep. Appropriately, it's Spokane's official tree. And in the city's oldest neighborhood, Browne's Addition, stands what very well may be the biggest ponderosa of them all, municipally speaking. As the region's elite built their stately homes in the surrounding blocks, this sole tree managed to somehow, though rooted firmly in the ground, stay out of everyone's way. So used to seeing these plentiful species are we that passersby on a warm Friday afternoon don't even notice it as they stroll under its reaching branches. Like writhing tentacles of a monstrous hydra, this tree reaches out, grasping with its needle-clump hands to tell the passing drivers, a man and his bulldog in the shade, a sleepy transient stomping through the leaves, that it's the biggest, best and most beautiful of its kind. (Located at 2028 W. Second) 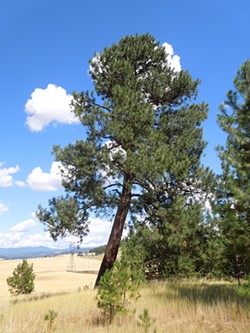 In the rolling foothills of Mount Spokane, this tree knows peace like no other tree, though peaceful species most trees tend to be. History believes it to be the white flag-bearer of truce, when, during the mid-19th century wars between the region's native tribes and a campaign led by Col. George Wright, Chief Baptiste Peone of the Upper Spokane Band placed the symbolic flag atop the lone pine as a signal of non-resistance. Don't kill us, we give in, it said. Today, the Treaty Tree leans heavily southward, cradled in a half-circle by dozens of its offspring standing ready to catch the mighty trunk should it ever falter. Over the electric buzz of nearby power lines and the whir of cars below, this behemoth of peace still shares its parable of the past. Its story is carried across the prairie by the wind whispering through its branches. (Located on East Doak Road, just off North Argonne Road) ♦

See a map of all trees in the Heritage Tree Program at historicspokane.org/map