Carrie Scozzaro
Find several half-pound burgers at Gathered, including the "island burger," shown here.
Stacie and Kevin Ward had family in mind when they created Gathered restaurant in Post Falls.

Nearly every family member works at Gathered (830 N. Spokane St.), including the couple’s son, Jaemasyn, who, along with Kevin, trained at Oregon’s Le Cordon Bleu College of Culinary Arts. When it came time to develop the menu for Gathered, everyone was involved in suggesting their favorite meals, Stacie says.

For example, Jaemasyn created the tin can nachos with layers of house-made chips and pico de gallo, seasoned beef, queso cheese sauce, jalapeño, olives, guacamole, and sour cream served piping hot in a large can ($13). Those and the fried cheese curds ($12) are two of the restaurant’s most popular menu items, Stacie says.

Gathered’s menu also features scratch-made comfort food like spinach and artichoke dip ($10), chili ($7), and half-pound burgers with various toppings like blue cheese and bacon ($15). Entrees include fish and chips ($15) and the 16-ounce ribeye ($30). Also look for salads, appetizers, decadent desserts like a flight of cupcakes ($10), and daily specials.

The Wards opened Gathered in July 2021, after a nearly six-month delay while remodeling the building, which also houses the couple’s two other food businesses: Stacie’s Cakes and Purple Onion Catering Company. Next, the couple hopes to expand Stacie’s Cakes into a coffee shop, and they have even been mulling over doing family-style dinners at Gathered. And when they’re not working? “We think of another business to start,” says Stacie with a laugh. Visit Gathered on Facebook.

Befitting of its surroundings, Haymaker has an industrial vibe, with cinder block walls, corrugated metal and aged wood accents, vintage-style drop lighting, and a concrete floor. However, abundant windows ensure it’s brightly lit in the day, and a roll-up garage door offers easy access to the side patio.


HOTTEST NEW BAR IN TOWN
Tell your friends to meet you in hell, and you’ll likely find out who has a sense of humor, then clarify that you mean the new Purgatory Whiskey Bar in downtown Spokane (524 W. Main Ave.).

If your social set are whiskey drinkers, even better. The restaurant has more than 600 bottles from all over the world on display in an eye-catching wall of shelves, each underlit with purple neon. Purgatory opened in late fall 2021 and is the second spirit-forward place for Colville native Kevin Cox (his other Purgatory Whiskey Bar is in California, which offers a whole new round of potential off-color jokes). In reality, the businesses are named for a region in Colorado that Cox frequents and is fond of.

Sit along the live edge bar, which runs the full depth of the restaurant, and have the Last Laugh: gin, green Chartreuse, maraschino liqueur, honey and lemon ($10). The restaurant also has a wine and rotating craft beer list.

Chef Ted Genoway is the talent in the kitchen, which offers a litany of snacks, salads, entrees and dessert. Share the smoked salmon board ($15), or fill up on pork belly tacos ($14).


To Go Box is the Inlander's regular dining news column, offering tasty tidbits and updates on the region's food and drink scene. Send tips and updates to food@inlander.com.

To-Go Box: Rounding up the latest local beverage news from coffee to soda; kombucha to boba 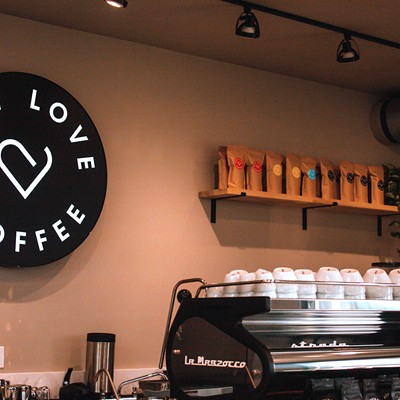