For the past quarter-century, Lynn Everson has led a controversial means of making drug users healthier

Young Kwak
Lynn Everson, coordinator for Spokane's needle exchange, has spent many nights on the streets of Spokane.

there are two 5-gallon orange buckets emblazoned with biohazard symbols. Each day the exchange is open, clients file in, plunk used syringes into the buckets and pick up new ones.

During a week in May, vanilla mousse cake was sliced up and served each day, celebrating the exchange's 25th anniversary. Lynn Everson, the exchange's longtime coordinator, always knew this occasion would come, though at times that wasn't obvious.

Most of the people who use the exchange inject drugs such as heroin and meth. The idea behind the program is that giving away clean syringes will stop the spread of diseases like HIV and hepatitis, as well as skin and bacterial infections that can result from dirty needles. Clean needles, says Everson, will keep clients alive long enough for them to enter recovery. "Dead people don't recover," she says.

When the exchange opened up in a modest building in downtown Spokane, it was among a handful of places in the country adopting the controversial practice of giving drug users clean needles. At the time, it drew scorn from prosecutors, police and the public, who viewed it as a means of enabling drug use. But since then, it's become an increasingly mainstream public health practice that research has shown reduces the harmful effects of drugs.

Over the past quarter-century, the exchange has operated under the stern yet caring gaze of Everson, who is 67. She's a pioneering public health worker, she's a bleeding heart, she's a no-nonsense gatekeeper and she's a fierce advocate for people who much of society would rather lock up and forget. She's seen the exchange weather lawsuits, among other threats, as it's grown into a widely accepted institution.

"She is definitely an institution in and of herself," says Spokane police Sgt. Mike McNab. "She is the program, and what's she's done in the community is priceless." 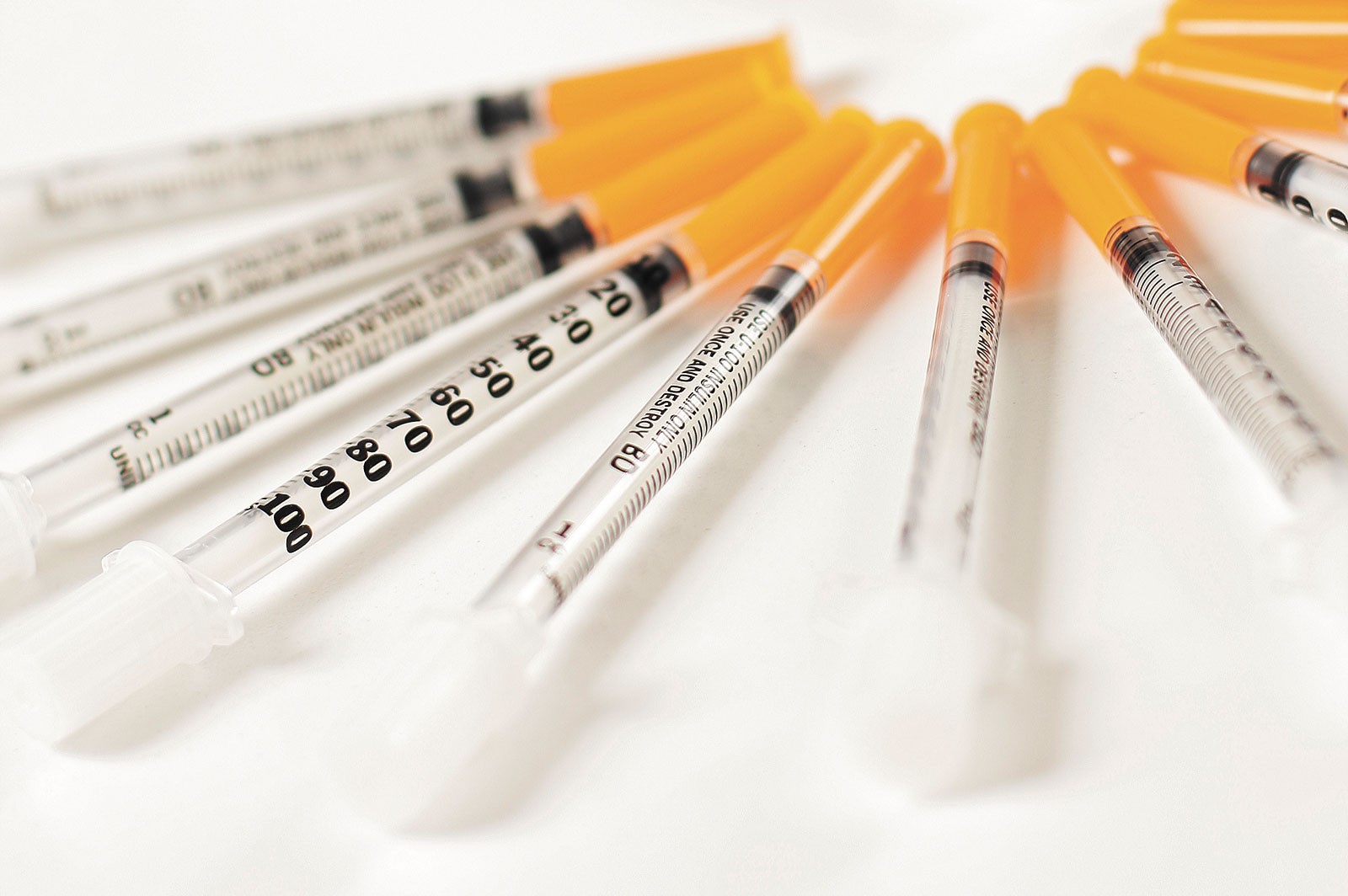 in Spokane. She grew up in West Central and graduated from North Central High School. She did two stints at Spokane Falls Community College, but never completed a degree.

In 1989, she was working at a law office. She knew she couldn't sit at a desk all day, and it was the last job where she'd have to do so. Everson says she was friends with a gay man who was among the first people in Spokane to die of AIDS. So when the health district had an opening for someone to do HIV education and outreach, she successfully applied for the job in hopes of preventing others from contracting the disease.

She was known as the "condom lady." At night, she walked around an area of downtown near the Greyhound station where flophouse hotels and bars were located. Whether it was 100 or 10 degrees, she'd walk the streets with bags of condoms, some lubricated, others flavored, that she'd hand out to homeless youths, women engaging in prostitution, gang members and anyone else who wanted them. She would also hand out lube and Tootsie Rolls, and try to teach people about HIV and other sexually transmitted infections. If a man told her he wouldn't fit into a condom, she would place one over her head and blow it up to prove that he would.

"Nobody paid much attention to what I was doing," recalls Everson. "I was the first outreach worker. ... We didn't get a whole lot of backlash until we announced we were going to do a needle exchange in 1990."

Beginning in the 1980s, European cities set up programs that gave drug users clean needles, with the aim of slowing the spread of blood-borne illnesses. A handful of U.S. cities, including Tacoma and Seattle, also started exchanges, and the Spokane Board of Health voted in 1990 to set up its own exchange, even though the benefits of the practice hadn't conclusively been established and segments of the public and law enforcement were hostile to the idea.

The early 1990s weren't a sympathetic time for people battling HIV/AIDS. Everson recalls critics of her work saying, "If people have AIDS, it's God's will they should die." The nation's drug war was still in its "Just Say No" phase, and Everson says that people threatened to stand outside the exchange and take clients' pictures (which they never did).

"Since when does providing the addicted person with the very substance to which he is addicted or the means of using it engender in him a sense of social responsibility?" wrote then-Spokane County Prosecutor Donald Brockett in a 1991 Spokesman-Review op-ed. Brockett went even further, threatening to prosecute health district workers who gave out needles.

The health district sued Brockett and the case reached the state Supreme Court, which ruled that the exchange was legal. On May 17, 1991, Spokane's needle exchange opened for business in a cockroach- and mice-infested building downtown. That day was anticlimactic, says Everson. Only three men entered, she says, each exchanging a single needle.

Torney Smith, administrator of the Spokane Regional Health District, says that Everson has "as good of relations with people on the street as anyone I've ever been associated with." He says that Everson will hand out toiletries and coats to clients who need them, and has even had gang members gladly offer to help her move boxes.

"She's honest and fair and listens and doesn't judge," says Erin Williams Hueter, director of victim advocacy and prevention at Lutheran Community Services Northwest, who says that Everson is a wealth of knowledge and has used her rare rapport with prostitutes to develop a "bad trick" list of abusive johns. "She doesn't let people take advantage of her," she adds.

Everson won't tolerate clients who try to get more needles than they're entitled to under the exchange's 1-to-1 rule. If their count isn't accurate, she says "she's mean." She'll tell unruly clients to go to the exchange in Yakima if they don't settle down. She insists that people show up at 4:30 pm, allowing enough time to get their needles before the exchange closes at 5. She gives every client alcohol pads, tourniquets and syringes, as well as a cookie, donated by Rosauers.

"We're a safe place to come," says Everson. "We're very structured. There's a rule for everything, and I'm the enforcer."

Two years after opening, the exchange moved to another downtown location, next door to an adult bookstore. In 2007, it moved to its permanent location in the Spokane Regional Health District's headquarters off of North Monroe Street. Attitudes about the exchanges have also moved, says Daniel Raymond, policy director for the Harm Reduction Coalition.

He says that a 1993 U.S. Government Accountability Office study, finding that exchanges reduce needle sharing and the spread of disease among drug users, while not contributing to an increase in illicit substance use, helped establish the practice's effectiveness. Since then, other studies have reached similar conclusions, says Raymond, and the number of exchanges has increased to more than 200 nationwide. Earlier this year Congress, responding to an epidemic of heroin and opioid prescription drug use, voted to allow federal funds to be directed to exchanges.

"One of the common misperceptions is that drug addicts will not do anything to help themselves, which is curious, because they came through our doors about 10,000 times last year," says Everson. Last year, the exchange swapped out 1.63 million syringes, according to Everson, who says that they could do even more with greater funding.

Law enforcement and other first responders have also come around. Assistant Fire Chief Brian Schaeffer says that Everson's work with the needle exchange has helped lead to sometimes uncomfortable conversations about proactive approaches to public health. Schaeffer says that compared to other places, Spokane doesn't have the same problem with needles being left in public places, and he says that this year the department hasn't gotten any calls about needles left lying around. Schaeffer says that if first responders find someone in their home using injection drugs, they'll try to connect them with the needle exchange.

Everson says she's not sure when her work became more accepted, but she hears fewer complaints.

over a handshake. That's because after handling needles for a quarter-century, her hands ache. Earlier this spring, she was accidently stuck with a used needle, only the second time that's ever happened, and had to take anti-HIV medications. Nowadays, she thinks about retiring.

She says she stays with the work because she sees her clients struggle everyday to survive and become healthier, and she finds them remarkable. Everson admits that her work isn't always pretty, but "public health deals with things that aren't always pretty." ♦