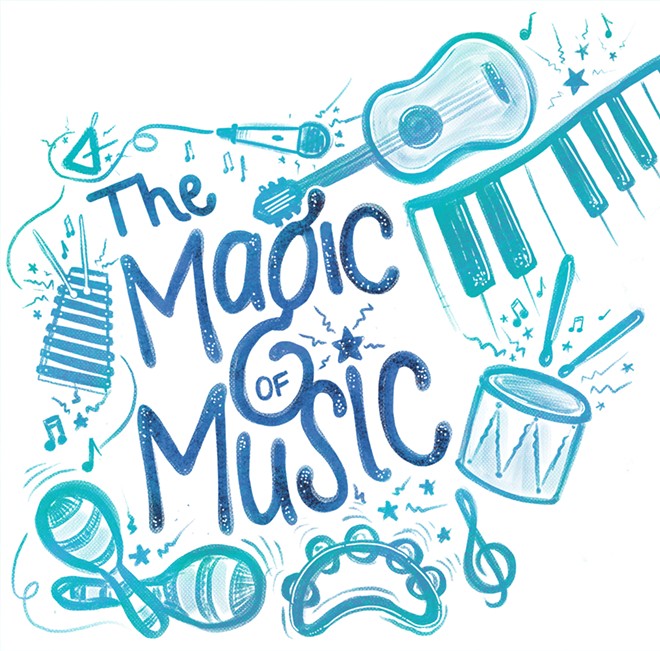 While there's little doubt virtually everyone finds enjoyment in some type of music, music therapists want you to know that their field is much more complex. Simply playing music for an audience is not music therapy. Music therapy isn't about achieving musical goals, and the Music and Memory program, where custom playlists are curated for elderly people with Alzheimer's and played for them on headset, is definitely not music therapy, they say.

"Music therapy isn't just listening to music. It's not just someone playing a guitar by someone's bedside where you're passive — it's engagement," says Carla Carnegie, a certified music therapist and founder of Willow Song Music Therapy Services in Otis Orchards. "We're not just flying by the seat of our pants and doing whatever. The things that we offer are because it's been researched and there's evidence there."

While the earliest references to the therapeutic value of music in the U.S. date back to the late 18th century, the development of music therapy as a serious clinical profession kicked off in the 1940s, when the first academic programs in the field were founded.

The applications are highly varied. Songwriting can provide an outlet for expression for traumatized youth, singing can be used to help people with Parkinson's improve their speech, and drumming can help veterans with post-traumatic stress disorder regulate their emotions. Individual therapy models are highly customized and evolving, and often take place in tandem with other therapies that patients are pursuing.

"Music is a medium to help reach a therapeutic goal," says Carlene Brown, director of the music therapy program at Seattle Pacific University. "While it may look entertaining and be entertaining, we are always based on clinical goals."

But the goals are wide-ranging: "All the areas where you see nurses work, music therapists do work also," Carnegie says.

Music therapy can address many of the issues facing people with Parkinson's. It turns out that the parts of the brain that regulate movement are closely tied to those that perceive rhythm. Musical rhythm training can help improve walking abilities — including step length and speed — as well as limb coordination and balance, according to a 2015 article published in Frontiers in Neurology. Music and rhythm also increase production of dopamine, which tap into the brain's reward system.

"With rhythm, it fires those motor neurons and makes (the person's) movement more fluid and opens up the possibility for them to have greater muscle movement and expansion," Carnegie says. "It also makes the cells release dopamine. We all know that people with Parkinson's have a shortage of dopamine, but it's also that they're not using the dopamine that they have efficiently either."

Carnegie uses keyboards to work on fine motor skills, like improving finger strength, dexterity, and hand-eye coordination. Playing the drums can help with larger movements, to "motivate" her clients to "reach farther, reach out, and to stretch down," for instance.

"For people with Parkinson's, singing is really important because their voice gets so off," she says. "Being able to keep their articulation and keep those muscles strong, that's what we're trying to do: maintain the function that they have and improve it."

Strokes also inflict damage to the brain in various ways that can result in impaired speech and struggles with movement. A 2016 survey of studies published in Scientific Reports found that music-supported therapy is effective in improving "stroke-induced motor dysfunction."

Music therapy may assist with healing from childhood trauma, help adolescents with behavioral health issues, and in particular, may be especially effective for people dealing with post-traumatic stress disorder.

A 2012 study found that people with post-traumatic stress disorder (PTSD) who participated in music therapy saw greater improvements in their symptoms than those receiving cognitive behavioral therapy.

In fact, the development of music therapy as a field was helped along by research endorsed by the U.S. Army and the Office of the Surgeon General following World War II, according to a 2014 report from the American Music Therapy Association. During the war, officials also orchestrated music-based interventions in an attempt to rehabilitate returning veterans. A 2017 U.S. Department of Veterans Affairs review of academic literature concluded that music therapy has potential as a useful tool to "reduce symptoms and improve functioning among individuals with trauma exposure and PTSD."

One of Carnegie's clients, a veteran with PTSD, experienced significant progress through music therapy. They started out with drumming and rhythm, before shifting to guitar out of his desire to "connect with music again in a way that he hadn't since high school," she says.

"He's just come so much further in his own growth and healing and he's really getting some chops now on this guitar, now he's doing some song writing, so it's a beautiful transformation for him," she says.

For kids dealing with childhood trauma or other stressors, music therapy can provide a vital outlet for emotions and self-expression. Carnegie recalls a former client who was 10 years old and exhibiting "really horrific behavior issues" at school, likely stemming from trauma.

Young Kwak photo
Music and Play Therapist Kim McMillin leads a music therapy session for 14-year-old Evan Hannah, center, who is diagnosed with autism, and his mother Kerry at the Center for Music Therapy in Spokane.

"I just said, at the piano, 'play for me how your day has been' and however he wanted to express that on the keyboard. Oh my gosh, when he was having a bad day, it was heavy handed, you could feel the anger," she says. "It was really telling. He couldn't tell me in his words how he was feeling but he could express it in improvisation on an instrument."

Aside from serving as an outlet, music therapy can also help regulate behavior and emotion for kids with severe behavioral issues. Elements of the therapy — especially in group settings with multiple clients — such as interaction, taking turns, or even merely "tolerating" the introduction of another instrument into the session can help kids learn to interact with other people and keep their feelings in check.

"You meet them where they are and then you bring them to a place of change or well being," Carnegie says. "And then you can go from there to help them tolerate."

At the Center for Music Therapy in Spokane, music therapist Kim McMillin works extensively with children who are on the autism spectrum. Using a variety of instruments, combined with singing and interaction, she aims to improve their social skills, as well as building on motor skills and self-confidence.

She's been working with one particular group of autistic kids and their parents — they are encouraged to participate in the sessions — for roughly three years. And while progress has been slow and incremental, it is significant.

"It's just a long road. And this is not the only therapy that they're doing," McMillin says at her studio at the Center for Music Therapy.

Debbie Thomas, a mother of one of the kids, says that she's seen substantial changes in her daughter since she began music therapy three years ago: "Her confidence in socializing has improved," she says. "It's been fun to watch the confidence level build.

She adds that the therapy has helped her daughter learn to "appropriately interact" with other people, such as understanding the back-and-forth nature of conversation. Rhythm in the music has also aided her in learning to slow down her speech.

Overall, the progress has been "huge," Thomas says.

In 2015, the National Autism Center identified music therapy as an emerging intervention.

McMillin is also teaching some of the kids to read music: "They love it because they love the structure, because it's predictable," she says. "They love predictable things."

In some cases, music therapy can help children on the autism spectrum who suffer from severe physical conditions. Carnegie is currently working with one boy who is "blind and was born with poor muscle tone" to improve his fingers' dexterity and strength so he can use devices like a Braille reader in the future

"I use the piano to help him move his fingers," she says. "He needs to be able to manipulate devices that will help him."

It's hard work; labor that music therapy professionals often see being misunderstood. McMillin says that some parents will come in saying that they just want their kids to be "exposed to music."

She shakes her head: "No. We're working really hard at increasing the quality of life for your loved one."