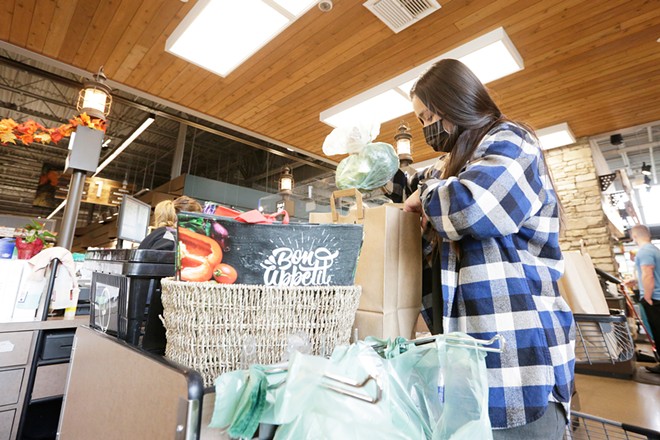 Since Washington's plastic bag ban started on Oct. 1, shoppers may have noticed stores are now charging a fee for each bag you need to carry out your groceries, clothes, electronics — pretty much anything you buy.

Under the ban, customers should be seeing less and less of the plastic "T-shirt" bags that became popular starting in the 1980s.

Instead, they'll be asked to pay 8 cents (or more) for a paper bag or a thicker, recyclable plastic bag that's intended to be used many times and/or recycled at a proper facility. Or, customers can use their own reusable bag.

Lawmakers passed the ban to encourage the use of reusable bags and reduce litter across state waterways.

Spokane Riverkeeper staff say plastic bags make up a significant portion of the more than 15,000 pounds of trash they remove from the Spokane River each year. Single-use plastic bags can also clog up the gears at sorting centers like the Spokane Materials and Recycling Technology (SMaRT) Center, because people "wishfully" throw the bags in their recycling bins hoping they can be recycled there. They can't.

While heftier reusable bags have a larger carbon footprint, with studies showing they need to be used 15 to 150 times to equal the impact of a single-use plastic bag, proponents of the ban point out that the bags are stronger and can often replace more than one single-use bag. The heftier bags often last for years or decades of reuse.

Grocery stores in particular are experiencing a large effort to educate customers as they switch to the other options.

At My Fresh Basket in downtown Spokane, store manager Hailey Higashi says they started posting signs about the ban a few weeks in advance so customers wouldn't be surprised come October.

"Everybody who has had questions has been super lovely about it, really," Higashi says. "The more we can help everyone, the more knowledge everyone can have about it, the easier the transition will be."

Still, hiccups with supply chains and efforts not to waste backstock have raised questions for some shoppers who still aren't sure what the ban means for them. Here, we try to answer some of the most common questions that have come up in the last month.

WASN'T THIS SUPPOSED TO START AWHILE AGO?

The delay was partly due to supply chain issues, as some manufacturing resources had been redirected to make personal protective equipment during the pandemic, and partly due to problems with shipping new bags to stores in time for the start date, says Shannon Jones, the Western Washington recycling coordinator for the state Department of Ecology.

WHY AM I STILL GETTING PLASTIC BAGS WHEN I SHOP?

In July, Inslee announced the ban would start on Oct. 1. But many businesses had purchased single use plastic bags in the interim, Jones says.


So, even though the flimsier plastic T-shirt bags were technically supposed to be gone by Oct. 1, many stores continue to use their backstock.

Understanding that process will take some time, and Ecology hasn't started enforcement on those complaints yet, Jones says. It would go against the intent of the law to ask stores to throw away the backstock.

Plus, some stores have had issues getting enough paper and thicker plastic bags delivered to them on time.

My Fresh Basket, for example, is close to using up the end of their backstock of thin plastic bags, and they expect a shipment of the thicker plastic bags in the next week or so.

"They were supposed to be here when the plastic bag ban took effect," Higashi says, "but with how the supply chain is at the moment, everybody's a little backed up."

OK, SO WHEN WILL ENFORCEMENT START?

While Ecology didn't help draft the new law, the agency is tasked with fielding consumer complaints and enforcing the rule.


The transition away from flimsier plastic bags altogether could take months, but Ecology expects that most stores will have used any backstock purchased before Oct. 1 by the end of the year, Jones says.

"After Jan. 1 we'll pretty much expect everyone to be in compliance," Jones says.

Still, customers are able to make a complaint about stores they feel aren't following the law. In following up on complaints, Ecology sends each store a letter explaining the rules and allowing the business to explain what's going on before any enforcement action. Stores could face $250 fines for not following the law.

"We've had some issues with the paper bag supply even before COVID. The real hope is to get people to bring in their bags."

ARE COMPLAINTS ALREADY ROLLING IN?


Of those, 73 were in the eastern region of the state, and 18 were specifically in the Spokane area.

Some smaller stores are finding it hard to stock up on those paper bags or thicker plastic bags right now, says Tammie Hetrick, the president and CEO of the Washington Food Industry Association, which represents small independent grocers.

"We've had some issues with the paper bag supply even before COVID," Hetrick says. "The real hope is to get people to bring in their bags."

HOW MUCH DOES EACH BAG COST?

The state ban requires that stores charge an 8-cent fee for providing paper or plastic bags that meet the new requirements.


"However, if they want to provide canvas bags or more durable, reusable bags to their customers [for free], we encourage that," Jones says. "It comes at a greater cost to the business, but those are the kind of bags I think people will actively reuse. I think that's a really good solution."

Stores can also opt to charge a higher fee per bag. If they do so, they are supposed to show a separate line item on customer receipts splitting out the state's 8-cent fee and the store's separate fee.

WHO KEEPS THE FEE?

The store you're buying the bag from keeps the fee, which is intended to help cover the costs of the pricier bags that contain more recycled or recyclable content.


While the 8-cent fee is eligible for a waiver from state business and occupation tax, if a store charges more than that, the additional amount becomes taxable income for the business.

WHAT ABOUT PEOPLE ON FOOD ASSISTANCE?

Any person who uses food assistance programs does not have to pay for bags.

However, the exemption from the fee only applies when that person is using their benefits card specifically for that purchase, Jones explains.

Purchases made with other payment methods would still be subject to the 8-cent fee per bag.

So far, Ecology has had four complaints statewide about stores wrongly charging food assistance recipients for bags, and only one of those was in Eastern Washington, in the city of College Place. ♦