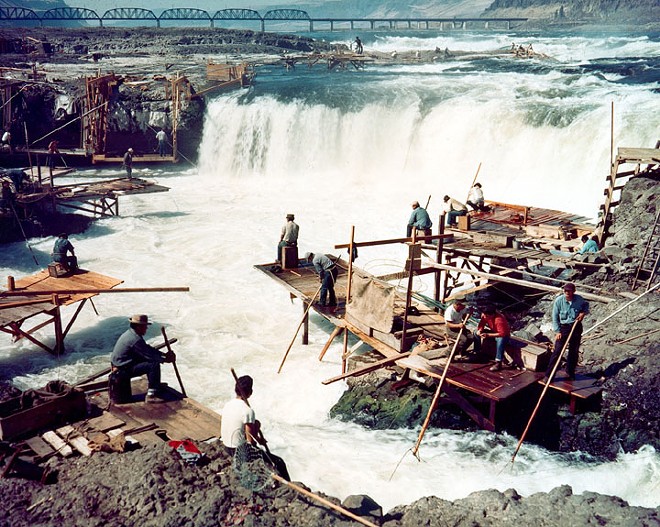 U.S. Army Corps of Engineers
On Monday, Oct. 14, Yakama Nation joined allies in a meeting at the location that was once Celilo Falls (pictured), a fishing area that was destroyed with the completion of the Dalles Dam in 1957.
With the artificially calmed waters of the Columbia River in the background, Yakama Nation and Lummi Nation leaders held a joint press conference on Monday calling for the federal government to remove dams along the lower Columbia River.

On the day formerly celebrated as Columbus Day, now celebrated by many as Indigenous Peoples Day, Yakama Nation Tribal Council Chairman JoDe Goudy shared a brief history of how the lands were colonized and the waters eventually controlled with dams.

Goudy set the historical context for how Yakama Nation eventually lost its fishing areas, providing an overview of how the Columbia River was "discovered" and named by Capt. Robert Gray in 1792, how the terms "manifest destiny" and the doctrine of Christian discovery were first used and how the treaty of 1855 came to be.

Importantly, he argued, the Columbia was controlled with dams in the 1900s without the informed prior consent of the Yakama Nation, which only later was given a "settlement" for their loss. There was no consultation beforehand as reserved under the treaty of 1855.

The area behind where Goudy stood was once Celilo Falls, a bustling fishing village until the area was inundated with water after completion of the Dalles Dam in 1957.

In the same way that the doctrine of Christian discovery formed the basis of genocidal acts against Native nations as Europeans invaded their traditional lands, Goudy said, the United States government gave itself the ultimate authority over rivers, despite the treaties.

"When you go back you understand the truth, the truth with regard to what has materialized this lake behind us all," Goudy said, "that assertion of dominion over all lands, waters and territories of people they deemed to be infidels. We’re not infidels, nor are we savages."

Goudy and others gathered, including Lummi Nation Chairman Jay Julius, called on the United States to reject that doctrine and remove the dams, which have "decimated the Yakama Nation's fisheries, traditional foods and cultural sites."

"We have a choice, one or the other: dams or salmon," Goudy said. "The native people of this land will be fighting ... for the salmon, for the water. This is why we have gathered here on this day formerly known as Columbus Day, to speak about the truth of history."

Julius offered up his support, as a witness, as chairman of Lummi Nation and as a lifelong fisherman descended from generations of fishermen.

Importantly, Goudy said, the call to reject the doctrine of Christian discovery was not an attack on Christianity, but a call for those who follow that faith to reject its prior use to justify horrible acts against people around the world.

"This isn't just for Native people, this is for everyone," Goudy said. "Today we bring forth a will, for the removal of Dalles Dam, removal of Bonneville Dam, and the removal of John Day Dam. 'These are no small things,' someone may say. For what’s at stake, they are very small things."