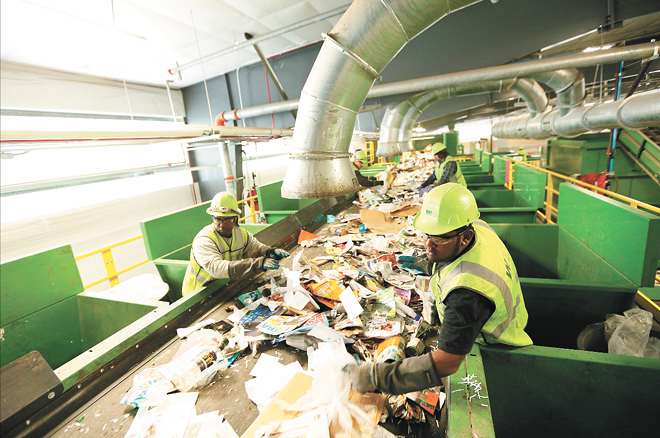 Young Kwak photo
Six days a week, truckloads of plastic bottles, cardboard, glass and newspaper run along an intricate set of conveyor belts and bins to be sorted at Waste Management's Spokane Materials and Recycling Technology (SMaRT) Center.
M
than a year ago, China announced it was done taking contaminated recycled materials from the nearly two-thirds of the world it provides recycling for. The country's National Sword policy would seriously ratchet down how much contamination was considered acceptable for shipments of plastics, paper and other recyclables bound for recycling mills and manufacturers there.

With that move, some parts of the U.S., including parts of Washington and the Pacific Northwest, no longer had a market for certain recyclables. Some material being dutifully sorted by consumers would instead head straight to the landfill with other trash, while other areas had to raise their waste bills to pay to get their materials to other markets.

It highlighted issues in the system, and new legislation proposed by the Washington state Department of Ecology hopes to address some of those deficiencies in regional recycling and solid waste management. The ultimate goal is to attract more businesses to recycle and use materials in the state, and offer state help for waste managers at the county and city level as they better plan for how to manage the stuff they collect.

The bills (HB 1543/SB 5545) haven't had a hearing yet, but Ecology hopes it'll be taken up soon in either chamber, says Laurie Davies, Ecology's Solid Waste Management program manager.

Local governments are currently required to make plans for how to deal with their solid waste, but Ecology hopes to add a requirement that they also plan for the end game for the materials they collect, Davies says.

"Things may ultimately be recyclable, but not have a market now," Davies says. "We don't want them to just throw it away."

Under the legislation, Ecology will also update its own statewide plan, which can be adopted by small areas that don't have enough staff to write their own plans, Davies says. It'll answer similar questions, and address things like recyclable storage.

No area is required to collect any certain materials for recycling, she says, but if an area opts to take , they need to have a plan for it.

"It's to get the counties to start thinking about what they want in their waste streams, and to be able to market what they have in their residential single stream," Davies says.

Single stream refers to a process where people dump all recyclables in the same bin. In other areas, it's sorted into separate bins by residents before pickup.

In Spokane, single stream recyclables are collected and taken to the Waste Management SMaRT Center (or Spokane Materials and Recycling Technology Center), where equipment and workers sort through all sorts of material. However, "wishful" recycling, aka throwing away things people hope are recyclable but aren't, can clog up the process there, and plenty of garbage has to be pulled from the conveyor belts by workers every minute.

The second priority of the legislation is to create a Recycling Development Center, which wouldn't be a new building, but between Ecology staff and workers at the Department of Commerce, Davies says.

"One of the key interests of the governor and other stakeholders was: why as a state are we relying on sending 60 percent of our recyclable material offshore?" Davies says. "And especially why can’t we, as a leader in recycling and an innovative state, try to bring businesses here to recycle our materials?"

The board convened for the process would research the best ways to recycle materials, which types of companies might need those products, and then work to bring those companies to Washington, Davies says.


The fiscal note for the legislation earmarks $1.9 million from the state's waste reduction and litter control account to cover the costs, Davies says. Ecology hopes that via the legislation, money that's been pulled from that litter account for other purposes the last several years will no longer be diverted and could be used to cover these projects.