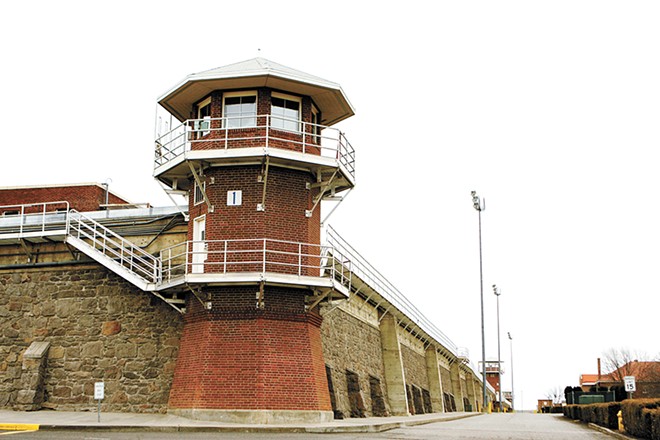 Young Kwak photo
Washington State Penitentiary in Walla Walla is one of eight state prisons with a library.

Reached by phone from the Monroe Correctional Complex near Snohomish, 43-year-old Atif Rafay, a long-time inmate at the facility, tells the Inlander that access to reading materials has always been tough.

"Books here have always been very hard to get," he says. "Even if you're at a major facility that does have a library, the library is very small."

So when he heard that the Department of Corrections — the agency that oversees Monroe and the other 11 state prisons across Washington — had quietly enacted a policy that banned direct nonprofit donations of used books to inmates at various facilities, he says he was baffled.

"I can't imagine being in prison without books. Books are your sole lifeline to the world," Rafay says. "Books are almost the most productive thing, in fact, the only genuinely productive thing that you can do with your time while in prison."

On March 12, Robert Herzog, assistant secretary of the prisons division of the Department of Corrections, issued a memo stating that, effective March 25, the agency would no longer "allow or accept" used books from nonprofit vendors. The memo also noted that current facility mailrooms do not have the resources to inspect donated books, and that contraband smuggled into state prisons is "escalating at a high rate."

The move caught members of Books to Prisoners, a Seattle-based volunteer-run nonprofit that mails donated used books to prisoners in Washington and across the nation, completely by surprise.

"We'd heard from a legal source that there were some moves afoot by the DOC to make this kind of change," says Andy Chan, a member of the nonprofit's board of directors who has been with the organization for 25 years. "The next thing we saw is that we got some book packages rejected at the prison in Monroe."

Operational since the 1970s, Books to Prisoners attempts to fulfil the roughly 1,000 to 1,300 requests for books that it receives from inmates' letters each month by sending out packages of donated used books to specific inmates on a weekly basis.

"We get a lot of requests for vocational technology: HVAC systems, cars. Also basic education stuff: learning Spanish, learning how to spell," Chan says. "And escapist stuff. People do request a lot of genre fiction, sci-fi, horror, those sorts of things."

"The fact that we get hundreds of requests from Washington prisoners each year for books indicates that the access to books is [already] inadequate," he adds.

After they found out about the ban, the organization began publicizing it on their social media accounts. Numerous local and national media outlets covered it, several state lawmakers rebuked the policy change, and a petition that emerged online calling on the Department of Corrections to rescind the policy garnered over 12,000 signatures.

"It's such a regressive idea," Chan says of the original policy. "It makes no sense to me."

In response, the Department of Corrections issued a press release on April 3, defending the policy change by claiming that there has been an "increase in contraband involving books" over the last five years, including "17 instances in 2018."

However, Karen Takacs, a Department of Corrections spokeswoman, tells the Inlander that the agency actually logged only five incidents of book-related contraband, and that they can't confirm whether they stemmed from nonprofit book donations.

"We can not verify that they were donated books, just related to books in general," she says.

While the release stopped short of rescinding the policy, Department of Corrections Secretary Stephen Sinclair was quoted as saying that any donated books could be screened through the existing Washington State Library facilities that are housed in eight of the 12 prisons.

"The Washington State Library has both staffing and systems in place to evaluate a publication's content and markings as well as check for contraband introduction," Takacs writes in an email. "Access to reading materials are not limited."

But even the Office of the Secretary of State, which oversees the Washington State Library system, was caught flat-footed by the March 12 memo.

"Our office was not approached by DOC prior to implementing this policy change," Erich Ebel, a spokesman for the Office of the Secretary of State, writes in an email.

In response, Chan with Books to Prisoners has argued that the whole point of his organization is to make sure inmates get specific titles, and that they're concerned that centralizing the screening and donation process through the state libraries might undermine that.

Sinclair also stated in the April 3 release that a series of meetings will be arranged with relevant nonprofits to discuss how to address the issue going forward.

Then, last Friday, Sinclair indicated in an interview with the Seattle Times that he was open to revising the policy: "We are going to ensure that we have processes in place that allow people [to get books]," he said. "They won't all go through the Washington State Library, as they don't have the resources."

Initially, Takacs said that the agency would chart a new course for its book donations policy after an initial stakeholder meeting on April 12. Then, on April 10, the agency released a memo from assistant secretary Herzog officially rescinding the policy, citing the lack of data to support it

“Concerns about contraband led me to issue the original directive. After conducting further review, the data does not support continuing the restriction on donated used books,” Herzog writes in the April 10 memo. “I am now reaffirming that the department will continue to support the receipt of donated used books.”

"It's hard to overstate," he says. "I can't imagine what else people would want people to do inside prisons." ♦

The original print version of this article was headlined "Barred Books"