What happens when you keep testing positive for COVID, long after you've stopped being contagious? 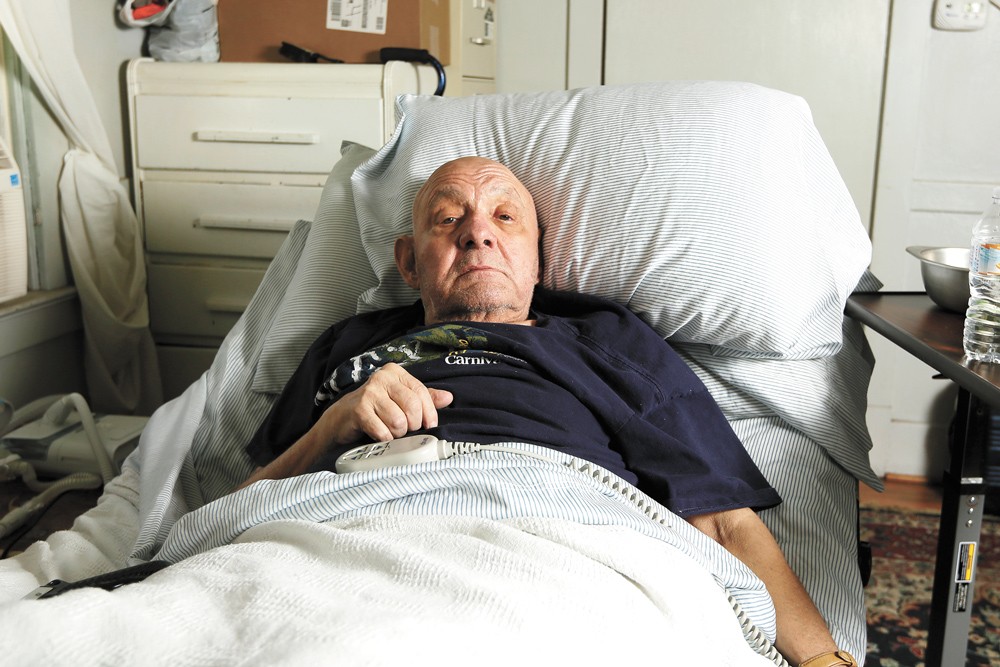 Young Kwak photo
Jay Wendell Walker fell and broke his femur a few months ago, sending him to the operating table and then a nursing home. That's where he contracted COVID-19.

It was July 24, Alli Talmage was at work at a Starbucks in Richland and her symptoms first hit. She felt thirsty, but it felt difficult to swallow water. She started finding it more difficult to breathe. She had a headache. And then — on her drive home — she started coughing and couldn't stop.

A cheap rapid test confirmed it: Talmage had contracted the coronavirus. She did the right thing. She took 14 days off of work — paid for by Starbucks. And at the end of it, she decided, just for her own piece of mind, to get another coronavirus virus test.

The results came back at the end of her first shift back to work. Another positive test. Another quarantine session.

"I sat there and cried, and I called my manager. This second quarantine has been so depressing," Talmage says. "Every day I just dread waking up."

After a COVID positive test, the federal Centers for Disease Control has officially outlined two recommended ways for you to escape quarantine and return to work or normal interactions: One focuses on time and symptoms: If 10 days have passed, you're fever-free without meds for more than a day, and your symptoms are growing less severe, then you're generally free to return.

"It's not necessary. It's not been proven to be effective," says the district's health officer, Bob Lutz. "It's a waste of resources."

Long after COVID patients stop being contagious, their body continues to slough off fragments of dead virus cells, sometimes triggering a "positive" reading from COVID tests.

"We have examples of people shedding virus six weeks out, two months out," Lutz says.

For some COVID survivors that means getting trapped in a cycle of tests and quarantines, cutting into their paychecks and even restricting their access to health care.

EXTENDED STAY
Sometimes, the cost paid by the COVID patients who keep testing positive is literal.

"I started to get worried about the middle of the month," Talmage says. "I'm not sure if I'm going to be able to pay my bills."

While Starbucks paid her for the first two weeks of quarantine, she says it hasn't paid for the next two. A call by the Inlander to the Starbucks corporate office suggests they'll correct the mistake; Starbucks current policy is to compensate employees for at least two stints of quarantine.

But Talmage isn't alone in that financial distress. When local auto parts store worker Lucas LaPierre tested positive from COVID, it meant staying home, even though he hadn't worked there long enough to accrue much sick leave.

"They wouldn't allow me to return back to work until I got the second test to confirm I was negative," says LaPierre.

He had to wait an additional six days — entirely free of symptoms, without pay — until he managed to finally get a negative COVID test. He estimates the lost salary alone cost him $1,000 — a big blow when you're in the middle of moving apartments. He says the CARES Act can help him to get some of that lost income back, but all the paperwork is its own arduous process.

Jay Wendell Walker, a Don Rickles-style local comedian, has suffered a rash of bad luck. He fell and broke his femur a few months ago, sending him to the operating table, and then to the "sheer hell" of a nursing home. That's where he contracted COVID-19, earning him an ambulance ride to Holy Family Hospital. Compared to the nursing home, he says, the hospital was wonderful.

On the other hand, he hadn't been home in over two months.

"He was so anxious to get out of there," says his wife, Elizabeth Thielen. "He's a very social person. It's tough to be social when you're quarantined."

But Holy Family wouldn't release him, she says, until they could make sure he had enough home health aides to assist him with basic tasks at his house. So for six extra days, Thielen says, her husband was stuck at the hospital, as the Department of Health and Human Services searched for people willing to help out a recovering COVID patient.

"They told him after 20 days, don't take the test anymore: You're going to test positive anyway, but you're not contagious," says Thielen. "But trying to find home health aides to come into your house [when you're still testing positive] is just about impossible to find."

Cathy McInroe, director of social work for Providence Health Care, confirms it's been a huge challenge to find unskilled home health aides — the sort who can help with cleaning, cooking and bathing — willing to treat even the noncontagious COVID patients.

"Most of the nursing facilities want a second test showing that they're negative," says David Chen, chief medical director for Deaconess and Valley. "And if they're positive, then they push back and do not want to accept people back."

The strict quarantine and testing requirements for nursing home employees, Chen says, means that just a few staff illnesses at a nursing home "totally decimates their ability to take on new people and care for them."

McInroe says that both Multicare and Providence have been holding meetings with the skilled nursing facilities to try to help them work through any regulatory reasons they haven't ditched the two-negative-test requirement for employees to return to work.

Because right now, it's hard to find spots to discharge some patients.

"We're keeping people longer than we should just because we need to," McInroe says. "There's just nothing out there in the community."

FOR THE LONG HAUL
Last week, after over a month in back-to-back quarantines, Talmage finally made her second return back to work. But she didn't feel so good. She didn't have a fever — the surest sign of being COVID-contagious — but she felt like she was going to pass out during her shift. She still couldn't smell or taste consistently.

Her manager ran her through Starbucks' checklist of COVID questions, and by the end of it concluded that she'd be on a third round of quarantine.

Talmage, she's discovered, is one of the rare "long hauler" COVID patients for whom symptoms have lingered for months. She sought out a virtual doctor visit for advice.

"And they were like, 'Oh, you're definitely not contagious by any means,'" Talmage says. "You're just going to have these long-haul symptoms."

Yet because of how rare long haulers are, and how new the research around COVID is, many experts are still cautious about making sweeping statements that symptomatic patients are no longer contagious, even after months of COVID.

Lutz says most labs can use COVID tests to calculate the "cycle threshold" — roughly, how long it takes the lab to detect a certain level of virus — to give an idea of how infectious a person still is. But in many cases, labs aren't reporting that information.

But they should, Harvard epidemiology professor Michael Mina argues on Twitter. Using the cycle threshold to calculate a patient's viral loads instead, he says, "will prevent unnecessary quarantining of millions after their infectious period and will help save huge resources in hospital settings."

In fact, in the Atlantic, he makes the case for relying much more on another kind of test entirely. These "antigen" tests, which could be developed to be as simple as spitting onto a strip of paper and waiting for it to change color, are cheaper and faster than the traditional shove-a-swab-deep-into-your-nose COVID test, but not nearly as accurate.

But the lower sensitivity may ultimately be a virtue, Mina says: It's only strong enough to detect the virus in people who are still contagious.

The original print version of this article was headlined "Staying Positive"