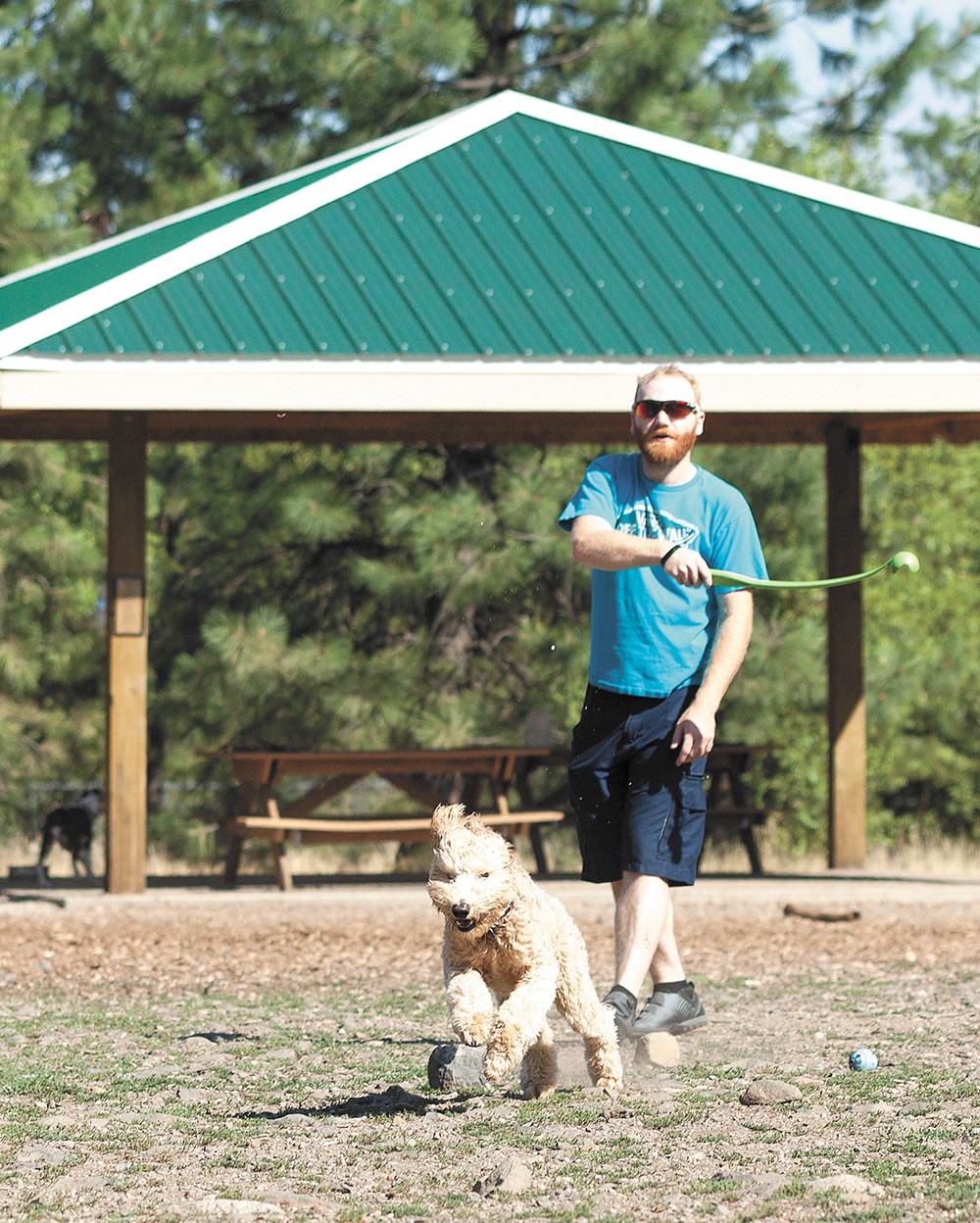 People adore dogs. They're furry, friendly and provide non-judgmental adoration and companionship in a modern world afflicted with social isolation. (Thanks, Facebook.) But not everyone feels that way. So that's partly why there's rules to keep dogs and their owners in check. Here, dog people, is what you need to know to do right by your fellow humans.

When you take your dog off your property, it needs to be on a leash — no exceptions. All dogs need to be securely harnessed, according to Spokane County code.

"As soon as it's off an owner's property, it's required to be on a leash," says Ashley Proszek, field operations manager for Spokane County Regional Animal Protection Service (SCRAPS). "The only exception would be a designated off-leash dog park."

That includes all state and local parks. We know, it's probably a blast to let your furry critter roam free up and down the trail while you hold up the rear wheezing. But, again, other people want to enjoy nature, too. Similarly, in Kootenai County, dogs are required to be on leashes no longer than five feet in any "public place" — and that includes parks. There is an exception for dogs that are under effective "voice control" of their owners. But Sandra Osburn, an animal control officer with the Kootenai County Sheriff's Office, says that this statutory exception can cultivate some self-delusion: "A lot of people don't realize that their dog isn't as good under their voice control as they think," she says.

Proszek says that "dog at large" is the most common complaint — this includes both aggressive and non-aggressive roaming dogs — reported to SCRAPS. Sometimes those calls stem from an owner taking their dog to the neighborhood park or a school field without a leash, only to get separated from it.

"The leash law is probably our biggest problem," Proszek says.

When it comes to feces, have common decency

This should go unspoken, but for the love of god, clean up after your dog. No one likes to step in dog poop — including dog owners. Chapter 10 of the Spokane Municipal Code states that owners and guardians of dogs must remove "any and all fecal matter deposited" by their dog on public or private property not owned by that individual. And while it's not explicitly spelled out in city code that dog owners carry plastic baggies to clean up waste, the regulatory mandate that you pick up said waste implicitly codifies it.

"When you're walking your dog, you need to have in your possession the equipment necessary to remove your animal's fecal matter," Proszek says. "The penalty for the city for the fecal matter citation, it's a Class 4 civil infraction," which can result in a $25 fine.

Dog owners are cut some slack when it comes to warnings and penalties if the dog defecates on public or private property while they're not present or aware when it occurs. But that doesn't mean you should just let your dog run wild. Just do your basic civic duty and get in there.

Continuous dog barking is annoying. Everyone hates it. That's why Spokane County code casts a broad net on excessive barking, defined as noises that are unreasonably disturbing to people. It's not like a traditional noise ordinance, which features defined hours.

"Even if the dog is barking in the middle of the day, it can still be a violation," Proszek says.

Dog owners can get warnings and citations for their dog's barking at all hours, though Proszek says SCRAPS makes an effort to educate dog owners on noise regulations first. Potential fixes to barking problems for dog owners include shock collars and dog trainings. (SCRAPS offers free dog etiquette and training classes twice a month on the first and third Saturdays.)

To report an excessively barking dog — or other potentially problematic dogs known to be violating existing city or county law — Spokane County residents can call SCRAPS at 509-477-2532. People can also report cases at SCRAPS' website via a complaint form. Across the state line in Kootenai County, people concerned about specific animals can call the Sheriff's Office Animal Control Section at 208-446-1300.

No mutts near the food

Dog owners love to take their furry companions out with them to restaurants and bars. (Their inner monologue probably goes something like: "My dog is special, cute, and everyone will love them.") But, as it turns out, it's basically illegal — unless it's a certified service animal.

Under state regulations, no animals are allowed in "food establishments" nor any parts of the premises, including patios. This includes places where food is stored, prepared, served and consumed.

To make it simple, Lisa Breen, a technical advisor to the food program manager with the Spokane County Health District, frames it this way: If the bar, taproom or restaurant is "required to have a permit from the health district then, they are not allowed to have animals on the premises." (In Kootenai County, dogs are permitted in bars that don't make food or produce liquor.)

"It's really hard because it's something that we recognize is really popular," Breen says. "People like to walk to bars and restaurants and take their pets with them." ♦