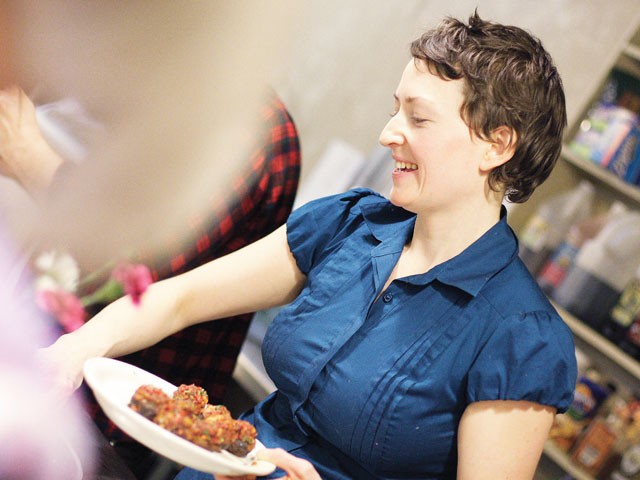 Last Friday, Sarah Edwards stood behind the counter at One World, working a hand-operated slicer with an odd blade that — seemingly through magic — turned three-inch-long zucchini into thin, julienned strands over a foot in length.

She was making pasta. Of a sort. The zucchini, which came to resemble angel hair with green racing-stripes of skin, were the noodles. The sauce was a sun-dried tomato marinara and the meatballs are little hand-formed clusters of nuts. Everything was raw. Meaning uncooked.

Which is a tough concept for many people to wrap their heads around, especially in a culture that often names its food after the type of heat applied in its preparation: pan-seared ahi, flame-broiled Whopper, etc.

Edwards is the owner and, at the moment, sole employee of Chakraw Foods. As she julienned, she talked nonchalantly about the misconceptions people have about raw foodies. “People think we don’t get enough protein. But beans and grains and many vegetables are pretty much complete proteins,” she said, then offered nuance: “… sprouted grains. Dark greens have a lot of protein in them. People on a raw food diet who aren’t feeling like they have a ton of energy need more greens, and smoothies are a good way to get that.”

It’s clear that Edwards’ mission, more than anything, is education.

Raw foodies talk in percentages. Go onto the various support groups online and you’ll find people lead with their name and follow with their percentage.

In threads that reference Spokane, the numbers are more like 60 percent, maybe 80.

Spokane is not a raw Mecca. There are options, from the salads and juices in Huckleberry’s bistro to certain deli items and cookies at Fresh Abundance, and a growing number of raw food bars available anywhere from Main Market to Super Supplements to certain Fred Meyer locations, but these options are often expensive. More troublingly, for Edwards, people think these options are the only ones.

Chakraw’s mission is to change that. Edwards wants people to recognize “raw” not as a label applied to a particular — stereotypically healthy, unappetizing, New Age-y — food product, but as an integral part of an integrative lifestyle.

Two years ago, her plan was to start a company that sold dehydrated, packaged raw foods — a company that would have supplied places like Main Market and Huckleberry’s and Fresh Abundance. “I’m glad that didn’t work out,” she says, “That food can be expensive, because the food takes so long to prepare.” Those are the two biggest knocks against the raw lifestyle: it’s pricey and it’s time-consuming (soaking wild rice for three days, say, instead of simmering it for an hour).

Chakraw aims to knock down both of those conceptions. Buying a nutritional bar with “Raw” on the package will undoubtedly be more expensive than buying a Clif bar. Preparing raw food from whole ingredients as part of a more mindful way of living, though, won’t necessarily be.

It needn’t consume your whole life either. “Just like cooked food, you have these gourmet recipes with preparation that takes all day, and recipes that you can make quickly,” Edwards says. “It can be as simple as you want it to [be].”

She wants to showcase that spectrum of experience, through informational dinners like the one she prepared at One World last week, and through upcoming classes.

About raw foods, Edwards is devout but not Pentecostal. She acknowledges that perfection is hard to achieve and almost impossible to maintain — right now, she says she’s “between 70 and 90 percent raw.” And perfection seems to be beside the point. The journey of mindfulness is what’s important.

The name of her company, Chakraw is a play on words that sounds hippy-ish. And it is, to a degree. Edwards identifies her friends and well-wishers as “most of the people with the dreadlocks.” More than a nod to a culture, though, the reference to Chakras — a Hindu concept relating to humans’ centers of spiritual power — is about balance of life. Maintaining balance is something that’s different for every person.

“I do my best to stay away from any self-righteousness,” Edwards says. “This isn’t the way, it’s a way — and it’s done so much for my life.”

Though there are certain hints your body gives you, to help you find your path. “If you’re eating something,” she says, “and every time you eat it, you get a stomach ache and feel tired, maybe you want to consider not eating that anymore.”

People here surge like the tide. One minute, the room is all but empty, the next — say, around 5:45 pm, 15 minutes after One Wo rld officially opened for its Friday evening dinner service — every spare inch in front of the cafeteria-style service bar was taken up. There was a seething mass of bodies clustered in the entry way and a line stretching out the door, and Edwards’ meandering nonchalance was replaced with a kind of deliberate frenzy. She was serving. She was checking food stocks. She was answering questions.

People seemed surprised how good everything tasted. The chocolate mousse, pineapple cucumber gazpacho, purple kale salad and the cherry cheesecake were big hits. (I personally had a hard time discerning the raw mousse — which is made primarily with avocado, cacao and coconut oil — from the more traditional cream-and-egg-white variety.)

Someone asked about how Edwards achieves the different consistencies in her food. She paused for a moment, then said, “Nothing is cooked — everything is either dehydrated or refrigerated or… uncooked.”

We’re so used to doing things to our food, it’s hard finding the language to explain preparation that involves doing as little as possible.

It’s a process that has taken Edwards years. Last Friday, she took her first step toward teaching that process to others. Judging by the packed house and contented post-meal conversation (one patron, to her companion: “Did you try the cheesecake? Go get the cheesecake.”), it was a success.

Chakraw’s first formal workshop, Introduction to Raw and Living Foods, will be held at One World, 1804 E. Sprague, on Sunday, Feb. 28, at 1 pm. Suggested donation: $30. Edwards is also planning a Raw Desserts Workshop on March 20, and a class on raw dehydrated foods on March 27,  at locations to be determined. Visit chakrawlivingfoods.com.ingfoods.com.