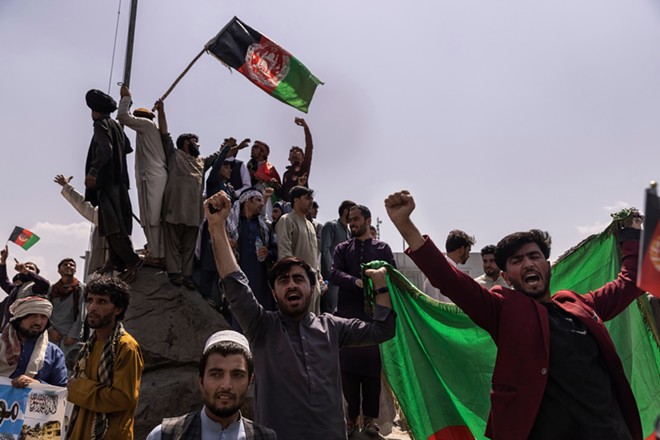 Go ahead and blame Bush for the Afghanistan debacle. Blame Obama. Blame Trump. And blame Biden even though, as with JFK and the Bay of Pigs, he has not been in office long enough to be fully culpable.

But if you are parceling blame, save some for the press.

Especially in the first few years of the Iraq and Afghanistan wars, the press abrogated its ethical responsibility, trading skepticism for jingoism, regurgitating government half-truths and flat-out lies with rare qualification. Flag-pin patriotism helped make palatable to the public expensive, deadly, and ultimately unsuccessful nation building in both Iraq and Afghanistan.

The U.S. will soon mark the 20th anniversary of 9/11. The rage that engulfed the country in the days and weeks immediately following the attacks seems ancient history now. At the time, the press immediately fell into easy historical comparisons with Pearl Harbor, though the nature of the enemy and underlying realities in both combatant nations could not have been more different. Vietnam was the more apt comparison, but our collective rage masked that truth.

The initial Afghanistan mission had a very specific goal — to find, detain, or kill Osama bin Laden, the mastermind behind 9/11. Also targeted was Mullah Mohammed Omar, the Taliban leader who had given sanctuary to bin Laden and his Al Qaeda organization and made Afghanistan a welcome home for anti-Western terrorists.

From the outset, the seize-and-kill missions failed, sometimes spectacularly as in the Tora Bora battle of late 2001 during which bin Laden barely escaped U.S. special forces and the CIA. He died at the hands of Seal Team 6 in 2011. Omar died in 2014 of tuberculosis having never been caught.

In support of the bin Laden missions, American and coalition forces inevitably were forced to take on the Taliban. But pushing aside the Taliban to make way for the bin Laden hunt soon morphed into a much more complicated mission, an effort to establish an entirely new Afghan government built around American democratic principles and to develop an effective Afghan military.

In those first few years following 9/11, the press was swept up in the national patriotic fervor. TV news anchors began to sport flag pins, as did more than a few print journalists I knew. No journalist wanted to be seen as unpatriotic even though professional ethics are clear — it is a journalist’s patriotic duty to remain neutral and skeptical.

The same press issues were evident in the build-up to the Iraq war that began in March 2003.

We know now that the neo-con hawks in the Bush administration lied with malice aforethought about the presence of weapons of mass destruction under control of Saddam Hussein. Some promoted the lie that Hussein was involved in 9/11.

And outside of government, the lies were reported without meaningful qualification by Judith Miller, a well-respected journalist at the New York Times. Miller’s now-discredited work set the national reporting agenda and news organizations that failed to follow the line found their stories spiked, their reporters attacked for a lack of proper patriotism and support for the military.

Beginning with “shock and awe” in March 2003, the press became consumed with the war in Iraq, a war far easier to report. Afghanistan became the forgotten war. The generations-long Vietnam hangover had already produced a “thank you for your service” backlash that elevated stories of American heroism and military prowess over more complex stories of policy and strategy unsuited to Page 1 and cable TV news.

Because of the danger, Afghanistan never attracted as many reporters as were assigned to Iraq. And covering discrete events — a bombing here, an outpost attack there, a mountain firefight somewhere else — meant that journalists could rarely get that 10,000-foot view to see the more complete picture.

There were some notable exceptions, among them a December 2019 report in the Washington Post based on secret documents and revealing two decades of government lies about the Afghanistan war. But that Pentagon Papers-type report hit with a thud while the press and public were consumed by the latest Trump insanity and the coming 2020 election.

And so, the press must share some of the blame as Americans — particularly those who served with distinction and unquestioned heroism, and those who lost loved ones — come to grips with our nation-building failure.

In 2005, I spent some time with journalists in Kherson in southern Ukraine. Many were veterans of the Soviet Union’s disastrous 10-year Afghan war, 1979 to 1989.

They viewed their own service as a useless waste of material, money and life. They asked, “didn’t Americans learn anything from our experience?” Or the experience of other over-confident colonial powers, from Alexander to the Brits? Afghanistan may be ungovernable, they said, and it is certainly unconquerable.

Maybe not. Probably not. But we can never know. ♦