Washington's plan for a better community college software system is falling apart; can it be salvaged? 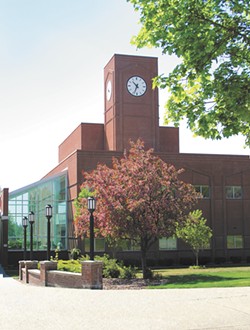 The rollout of ctcLink software contributed to budget issues at Spokane's community colleges.

Seven years ago, as the 34 community or technical colleges in Washington all dealt with a decades-old software system,

the solution for the state seemed straightforward: Replace the old system with something better.

So the Washington State Board for Community and Technical Colleges started planning to implement a brand-new software system for course sign-up, financial aid and other college business. It would use software called PeopleSoft Higher Education Suite, developed by the Bay Area software maker Oracle and trusted by hundreds of institutions nationwide. It would be customized for Washington's community and technical colleges with the help of Ciber, an information technology consulting firm. The software would be called ctcLink, and by 2017, every college would be using it as one centralized system.

Sure, the plan was ambitious, says SBCTC spokeswoman Laura McDowell. But it was necessary.

"It was time to have a modernized computer software system," she says.

That vision is now crumbling. The project, paid for with student tuition, is millions of dollars over budget and years behind schedule. The issues with ctcLink at the three schools used as guinea pigs — Spokane, Spokane Falls and Tacoma community colleges — forced a pause in the rollout to other colleges. Ciber, after filing for bankruptcy last month, is now suing the state of Washington, claiming that the state owes the company money and is to blame for the software's messy implementation.

Now, there's been informal talk of nixing the statewide rollout altogether, says Rob St. John, deputy director of the state Office of the Chief Information Officer, which oversees the project.

"It's always on the table, but we're a ways away from that," St. John says. "So that's not an imminent decision."

First, the state has to figure out if the software can work in Spokane and Tacoma before the "nuclear option" is discussed seriously.

"There has been significant investment here already," St. John says. "There's really not a path backwards for the pilot colleges."

OVER BUDGET, BEHIND SCHEDULE

When the ctcLink project was first being proposed, Community Colleges of Spokane — along with several other community or technical colleges — wanted to jump on the opportunity to be one of the first schools with the new software.

"We believed very much then, and believe now, that the software will help us better serve our students and improve the learning and work environment," says CCS Chancellor Christine Johnson.

The system would update what Johnson calls "antiquated" technology for student and class information, student finance, human resources payroll and data reporting. But immediately upon the rollout of ctcLink at the three community colleges in 2013, problems arose.

Students were bumped out of classes they had signed up for. Some didn't get their financial aid, while other received too much financial aid. Glitches in payroll caused faculty to miss out on paychecks. The numerous issues forced staff into working overtime, and by 2016, CCS reported paying $500,000 in overtime while trying to deal with all of the problems. Today the overtime costs are closer to $1 million, Johnson says. The state has not reimbursed CCS for those costs, exacerbating CCS budget issues.

The state budgeted $100 million for the entire ctcLink project for all 34 schools. The money comes from student tuition — 3 percent of tuition goes to an "innovation account" and is funneled to the ctcLink project. But in 2016, the budget projection was changed to $110 million because of the extended timeline, according to the SBCTC. Already, $86 million has been spent, with only the three colleges seeing the software. SBCTC's McDowell says this includes expensive upfront costs to get the pilot project going, including paying Ciber to develop the software.

Ciber, in its lawsuit filed against the state and SBCTC in April, says it was to be paid nearly $44 million over the course of various "payment milestones" until the project was completed. It claims that the company attempted hands-on coaching and training for SBCTC personnel, but that "the fractured bureaucracy of SBCTC inhibited such training and communication and slowed ctcLink's adoption by the colleges."

"In particular, Spokane Community College was hostile to implementing ctcLink from the very beginning, and its leadership actively worked to prevent adoption of ctcLink by not participating in the training necessary to operate ctcLink once it was implemented by Ciber," the lawsuit claims.

Instead of all colleges having the software this year, it's now projected to be finished in 2019, with the initial focus on fixing the glitches at the three pilot schools. Ciber argues that it was not its fault that the statewide rollout of ctcLink was delayed, but the fault of the schools themselves.

Gartner Consulting, an independent consulting firm, released a report on the project in November 2016 which outlines Ciber's financial losses. In the first nine months of 2016, Ciber lost $53 million in cash flow from operations, possibly leading to performance issues with the ctcLink project. Months later, Ciber filed for bankruptcy; weeks after that, Ciber filed its lawsuit, claiming it is owed $13 million by the state of Washington.

McDowell says the state board assumes the lawsuit is tied to the bankruptcy, but she says the board remains committed to the project. Capgemini, a French information technology firm, is expected to purchase Ciber and take over client services during the sale.

"I don't think anyone ever wants to hear that a company they've been working with so closely has to file for bankruptcy," McDowell says.

St. John says that a new company taking over could work out.

"In the end, if the outcome is that a healthy company takes on Ciber and this contract could be reset, that might be best," he says.

Despite the delays, the expenses and the legal trouble, both CCS and the state board remain optimistic.

Why? Because they believe the state is committed to making this work.

"I believe the state board is committed to helping all of the colleges, the 34 and the three colleges that are part of this [pilot] project," CCS' Johnson says. "They entered this contract wanting everything to work out for the benefit of students, so I think that's still the hope."

After all, the same software has been adopted in at least one other state community college system — Virginia's — with Ciber's help. The state's goal is to make the changes recommended by the Gartner report, McDowell says. The first tip the state took from that report was to pause implementation in other schools, and fix issues with the three schools in the pilot program.

The Gartner report says that "base strategy for ctcLink was reasonable" and that the state and colleges have worked hard, but it notes that the colleges operate independently with different policies. It recommends establishing a clearer governance process, meaning that the state should establish a single executive authority for resolving issues.

McDowell says the state has learned lessons from this process. For example, the SBCTC has seen "how certain, granular transactions create a domino effect on other areas," and the board has "come to more deeply appreciate how important it is for campuses to prepare for big changes in the way they enter — and report out — information using the new technology."

Starting May 1, an outside expert began managing the project, changing the governance structure following the Gartner report's recommendation.

St. John says that all of the recommendations can be achieved.