ater makes up a majority of our planet's surface, and it also makes up most of our bodies. We've long been told we need to consume more of it for our own health. And every time summer rolls around, the first thing many of us do is head out to a river or lake.

This isn't merely supposition; there's actual science involved. Look no further than a recent study funded by the European Union, which specifically explored the health benefits of water — consuming it, swimming in it, simply being near it.

Over the course of five years, the so-called BlueHealth study aimed to determine how access to water affected mental health. Using census data from various European countries, the study found that people who live near coastlines or have easy access to bodies of water had decreased stress and increased relaxation, and that living near the sea actually encouraged more physical activity and positive social interactions.

Marine biologist Wallace J. Nichols explored similar theories in his book Blue Mind, a title that refers to the mental state of being near water. Living in California, Nichols says that being around the water has become a form of therapy for him, much as it earlier helped him overcome his adolescent introversion.

"The reason why I got through my teenage years, probably, was pushing the canoe out to a lake in Illinois, instead of going to the keg parties," Nichols says.

It was a natural progression, then, to go into marine biology, and Nichols received a Ph.D in wildlife ecology and evolutionary biology from the University of Arizona. He says that in all his studies, however, a major component of being on the water — one that he had personally experienced — was never covered: "the social, psychological, cognitive and, some people will even say, spiritual health benefits [of lakes, rivers and oceans]. That just wasn't taught in school," Nichols says.

Of the studies that Nichols has participated in to support his findings, a notable one took place at the U.K.'s largest aquarium, the National Marine Aquarium in Plymouth, England. Scientists put test subjects in front of a giant tank that was in the process of being drained and cleaned, and then gradually filled it back up with water and wildlife. With each new phase, researchers asked the subjects about the levels of calm or focus they felt in front of the tanks, and measured their heart rates, breathing rates and blood pressure levels.

"[When there was] a low level of biodiversity, say one species of fish in the tank, it held their attention," Nichols says. "You add a few species, and it starts going up. ... People reported that they felt better looking at it. They felt better watching fish swim."

Nichols' studies of the connection between water and mental health led to the publication of Blue Mind. If "blue mind" is the ultimate mental state, which is ideally captured while being around water, then the alternate mental modes are "red mind" (stress, unhappiness) and "gray mind" (disassociation, depression).

As Nichols explains: "Red mind is extremely useful and powerful. It helps us win games, go to the moon, meet the deadline. But if it's your only mode, you will burn out. That's when you end up in gray mind, and that's breakdown, burnout, mild or severe depression. And there's nothing good about it."

ichols isn't alone in these assertions. Water has become a popular tool in medical and holistic spaces, as well. At Physical Therapy Associates on the South Hill, patients have access to a 4-foot-deep indoor pool that's heated to about 92 degrees, and which helps alleviate pain and improve mobility from injuries.
click to enlarge 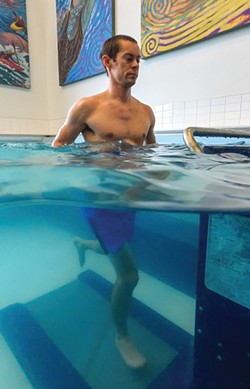 Denis Kalamar Photo
Running on an underwater treadmill at Spokane's Physical Therapy Associates is popular with patients. "Most people are immediately in a good mood," says therapist Dylan Palmer.

Dylan Palmer, an aquatic therapy specialist at Physical Therapy Associates, works with patients with all sorts of ailments, from sprained ankles and thrown-out backs to people who suffer from stiff or inflamed joints. He also works with athletes, from Gonzaga basketball players to goalies on the Spokane Chiefs. The water seems to have a transformative effect on all of his patients, he says, and he sees an immediate transformation as soon as they step into the pool.

"People love the water," Palmer says. "Most people are immediately in a good mood. They're happy to be there. [With] traditional physical therapy, you're on a table, you're getting pushed on, and it's not real comfortable. People will walk in [to the pool], and their pain will dissipate. It's amazing the effects that pain has on peoples' personalities."

In a typical hydrotherapy session, patients will work through the range of motion of their joints underwater, as well as walk or run in place on an underwater treadmill. It's like moving in slow motion or in an anti-gravity environment, and being submerged in water provides gentle pressure on the patient without actual physical contact.

"You have time to think about what you're doing," Palmer says of patients who benefit from hydrotherapy. "There's no real downside to messing up. It's a pretty safe environment."

Another popular practice within the realm of water-based therapy is the sensory deprivation tank, or float tank, which allows folks to soak in warm, salty water for a prescribed amount of time, completely free from light and sound.

Olivia Gusic is the studio manager and a massage therapist at Elements Massage, which offers float tank sessions in conjunction with its more traditional massage services. Elements Massage has about 300 locations around the country, including three in Spokane. But the Wandermere location was actually the first franchise in the U.S. to offer float tanks to its customers.

Gusic describes the floating experience as existing somewhere between meditation and physical therapy: Ideally, you're able to shut out all outside stresses, and because you're unable to sink in the salty water (Gusic likens it to floating in the Dead Sea), all the pressure on your limbs is instantly gone.

"It helps with circulation. It helps with focus," Gusic says. "There are people that use it for mental clarity. Anxiety, depression, PTSD — a lot of our clients use it for those things specifically. ... Because it's taking all the pressure off your muscles and your joints, the only thing in your body that's actually having to work is your internal organs. It gives you that weightlessness of just letting your body completely relax, which is a pretty rare thing."

Nichols echoes the sentiments about the benefits of floating, and points to its use in professional athletics as testimony.

"Steph Curry, [one of the finalists] for MVP of the NBA — he floats. The guy is cool as a cucumber on the court, even under extreme pressure," Nichols says. "I'm not saying, 'Float and you win MVP of the NBA,' but it's part of his regime for a reason. ... Sometimes people think the floating research is narrow, but for me, it's just proof of concept."

Floating has grown in popularity since the tanks were installed at Elements a little more than two years ago, and Gusic says she has noticed interest spreading via word of mouth. Gusic also recommends trying out the float tanks more than once: By the third session, she says, customers have typically become acclimated to the experience and are finally able to get the most out of it.

"A lot more people come in and give it a try and really love it, especially since COVID," Gusic says. "We've had quite a few clients that ... are not completely comfortable being in a massage session with another person, but they're comfortable coming in and being in a float tank by themselves."

Young Kwak photo
Marine biologist and Blue Mind author Wallace J. Nichols' says his research dives into, "The social, psychological, cognitive and, some people will even say, spiritual health benefits," of being in and around water.

he pandemic was certainly a drain on many peoples' happiness, and it also literally drained some peoples' access to water, as public pools and even beaches were closed.

"There's a large group of people who rely on their water therapeutically, whether they realize it or not," Nichols says. "It was getting them through this thing called life. When they couldn't swim at the YMCA, or couldn't surf or paddle on the river in their town or city, or go for a walk by the water, they start to lose it."

Nichols encourages people who might need a dose of happiness to spend time either with wild water — that's lakes, rivers and streams — or domesticated water, which includes everything from park fountains to water parks to splash pads. (In the case of Spokane, we get the best of both worlds, with a river that cuts straight through our downtown core.) And even if you can't make it out of your apartment or have easy access to a riverbed, Nichols says that disappearing into your favorite beach-themed songs or waterlogged movies can do the trick. In fact, Hollywood has been using water as a narrative symbol for years: "Maybe the remaining goal in my life is to get water a Best Supporting Actress Oscar," he says.

But why do people gravitate toward water in the first place? Although scientists like Nichols have shown that our brains and bodies react positively to the calming ripples of a lake or the cocoon-like enclosure of a heated float tank, the reason for it is still nebulous. It almost seems like a primal response, a cognitive association that instinctively links water with tranquility in our minds.

"Most of us grew up playing in pools or around water, especially here in the Pacific Northwest," Palmer at Physical Therapy Associates says. "People immediately become kids again."

"As humans, we're 75 percent water. It's such an important element to our life," Gusic explains. "It's so important for our physical well being. For floatation therapy specifically, you can completely take the weight off of your mind and your body. There's really nothing else that can do that for you."

The original print version of this article was headlined "Ebb & Flow"