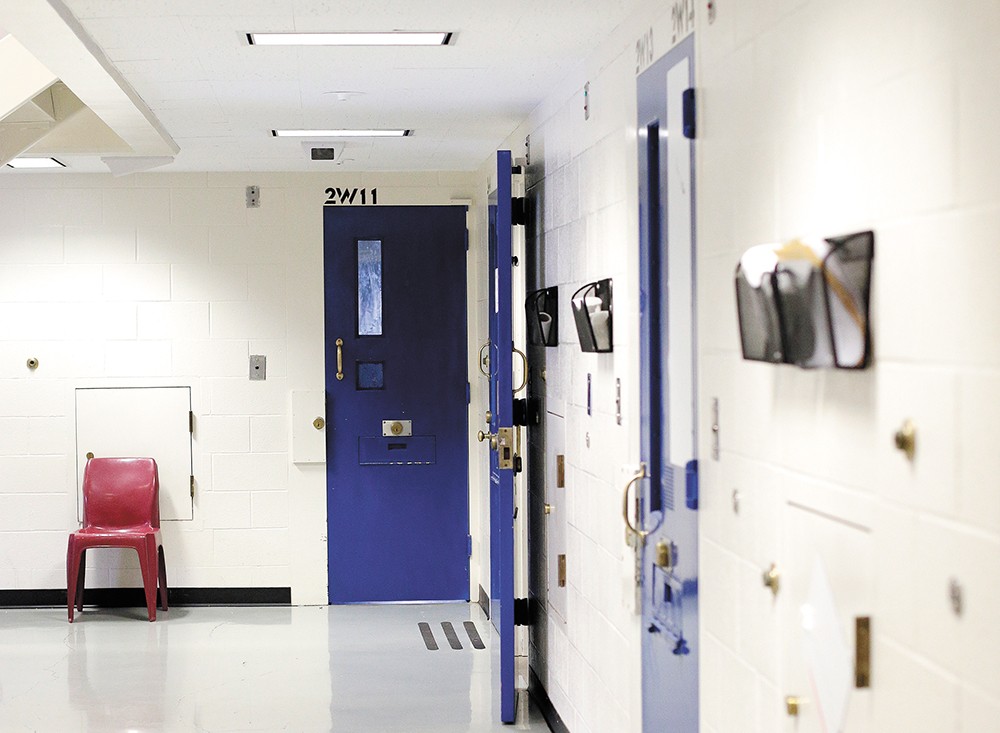 Young Kwak photo
An effort to cut the inmate population at the Spokane County Jail has hit a snag.

The idea, while simple, was to be transformative: A custom-developed computer algorithm would help judges decide which inmates really needed to stay inside the Spokane County Jail and which ones could be cut loose while their cases worked their way through the system.

The "risk assessment tool" — largely funded by the high-profile $1.75 million MacArthur Foundation grant that Spokane County received in 2016 — was supposed to help reduce crowding inside the county jail.

But it didn't work as expected.

And now, following a series of setbacks, the tool has been abandoned, and officials are looking to an alternative program to replace the stalled project.

"That was the big piece of our MacArthur [funded] project," Spokane Superior Court Judge Maryann Moreno says. "We had great hopes for it."

In early 2016, Spokane County commissioners awarded Zachary Hamilton, an associate professor of criminal justice and criminology at Washington State University, a $70,000 contract to build the assessment software from scratch.

Hamilton's program, known as the Spokane Assessment for Evaluation of Risk (SAFER), was pitched as a way to help lower the number of inmates held in county detention facilities in concert with other grant-funded initiatives — such as a reminding defendants of their court dates through text messages and adding staff to the Spokane County Pre-trial Services division.

The program was also intended to reduce judges' reliance on money bonds, which critics argue unnecessarily detain poor defendants who otherwise would show up to court and pose no risk to the community if released.

"The concept was that there were a portion of the individuals that were being detained that didn't need to be and in order to reduce that jail population we wanted to implement a risk assessment," Hamilton tells the Inlander.

But the tool, which was first tested at the end of 2016, was hobbled by technical difficulties and logistical headaches. And the county jail inmate population — the majority of whom are pretrial defendants — hasn't budged substantially, according to data provided by John McGrath, director of Spokane County Detention Services.

"I think the perception is that there have been too many hiccups thus far," Hamilton says. "It was just a heavier lift than Spokane was willing to bear."

According to Hamilton, SAFER was designed to be holistic, in that it assessed factors such as defendants' housing stability, drug use and mental health when assessing their risk (in addition to traditional factors such as their history of failing to appear in court) through an intake interview conducted by county pretrial services staff. SAFER was supposed to be a more accurate tool because it included more nuanced information beyond someone's criminal history.

However, it ran into issues as it was tested. There were delays getting the tool developed due to staff turnover at the firm contracted by Hamilton to help write the program, and technical issues with how risk scores displayed on monitors. Then there were problems getting the software to automatically sync with criminal history data from the state's administrative office of the court, which increased the workload on staff at the county pretrial services office, who had to manually search state databases.

Cheryl Tofsrud, manager of Spokane County Pre-trial Services, says that syncing SAFER to state-level data was crucial for the tool to be logistically feasible. Without quick access, her staff had to look up defendants' criminal histories manually, adding labor to a process that already required a lengthy interview. And while her department received grant funding for six new positions to help run SAFER (along with other new services), the workload was unrealistic for the five they ended up hiring, she says.

"What was thought to be something of a time saver for staff [actually] wasn't," Tofsrud says. "That just didn't play out."

To compensate, Hamilton developed a simpler version of the tool known as SAFER Lite while technical issues and access to the state data was addressed. The new version was first tested in March and was used and tinkered with for the next few months.

But then, another snag: In late May, there was turnover in the county pretrial services department among the employees hired to run the new program. That prompted Tofsrud to suspend usage of the algorithm. "That was the decision that needed to be made because we did not have the staff to adopt any risk assessment tool at that point," she says.

"They took the tool offline. We were kind of radio silent at that point," Hamilton says. "I think the story is we couldn't get it done because of the slow gears of government."

At that point, stakeholders were eager to ditch the SAFER project and pursue a more conventional, pre-made risk assessment designed by the Arnold Foundation known as the Public Safety Assessment (PSA). This tool — which the foundation has made available to interested jurisdictions free of charge — requires no interview and looks at fewer factors, such as the defendant's' criminal history, their age and history of failing to appear in court.

"We decided that it would benefit all of us to move forward with a risk tool that we could quickly and effectively implement," says Maggie Yates, Spokane County's law and justice administrator.

"We didn't abandon SAFER lightly," Judge Moreno says. "We held on until we realized we weren't doing a service to the community and we just needed to move on." 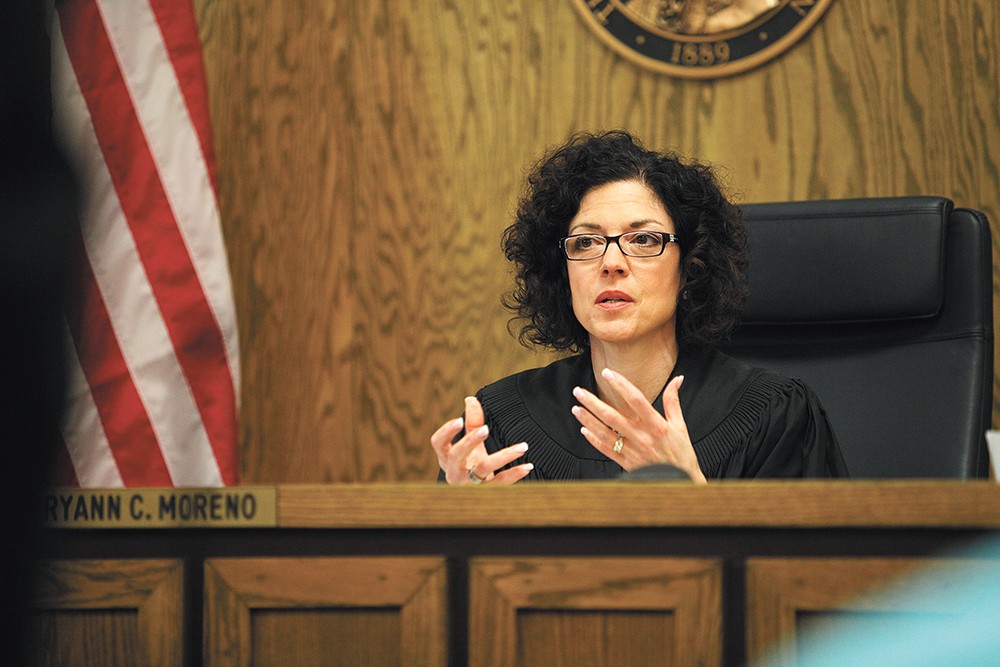 Breean Beggs, a Spokane City Council member and criminal justice reform advocate, argues that, in hindsight, the county shouldn't have invested as much time and energy in a single project. "I think the expectations were too high [among] people that, somehow, with a very precise scientific tool, we'd be able to reduce the jail population," he says.

According to Yates, roughly $600,000 in grant funds was spent on adding staff at the county's pretrial services division to both implement SAFER and other new services. Another $150,000 was budgeted for developing and implementing SAFER, though not all of that has been spent, Yates says.

Yates adds that the county plans to implement the new tool within six to eight months, and that it won't require significant additional costs since no additional staffing or development is required.

However, the PSA also comes with its critics, who argue that the tool may exacerbate racial bias since its algorithm looks at a more limited range of factors — such as criminal history — and how that may result in demographics already disproportionately represented in the justice system scoring as higher risk and, therefore, getting locked up.

Hamilton claims that the PSA won't be as "accurate" as his tool. "I don't know how well it will perform," he says, adding that the county has "moved on" without him.

While acknowledging the concerns, Yates says that it's "ambitious but realistic" that Spokane County will see substantial reductions in the jail population after the PSA is implemented along with the other reform efforts. She points to Yakima County, which successfully implemented the PSA in 2016 with the help of a Pretrial Justice Institute grant and saw reductions in racial disparities in its pretrial jail population.

"I'm hopeful that we will make a dent in our jail population in a safe and responsible manner," Yates says. ♦

The original print version of this article was headlined "Dashed Hopes"