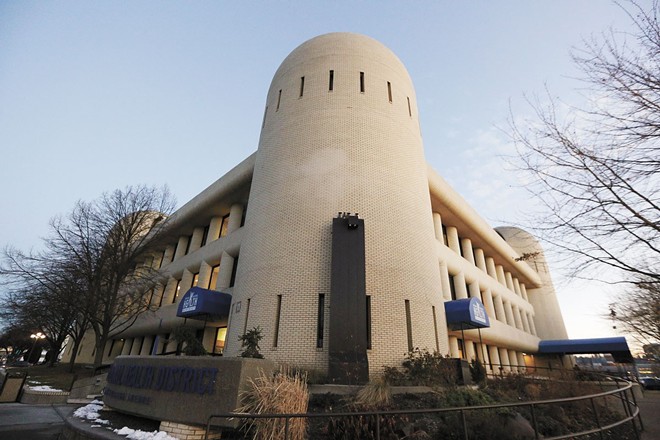 If you've been following the COVID-19 numbers in Spokane, nobody could blame you for being alarmed at what looks like an uptick in cases this last week.

Since Friday, according to the Spokane Regional Health District, there have been more than 1,000 new cases, or 168 per day — a huge increase in case rate from the week before. Using those numbers, the New York Times COVID tracker puts Spokane County among the COVID hot spots in the United States.

But those numbers are deceiving. At least 300 of those cases are not actually new cases at all but instead positive cases from weeks or months earlier, says health district spokesperson Kelli Hawkins. Some of them are positive test results from as far back as December.

That's because the Washington Department of Health recently discovered a backlog of around 3,500 positive cases since December that had not been previously reported. The backlog is primarily impacting King, Pierce and Spokane counties, state health officials tell the Inlander.

Juliana Grant, a state epidemiologist, says the problem was due to miscommunication with a lab that shared test results with the state. In December, that lab — which the state health department would not name — started sending additional data through an electronic channel that was not picked up by the state's system. Grant described it as partly human error and partly a technological error.

"There are things that could have been done on both the [Department of Health] side and the lab side to prevent this," she says. "I think the important thing is that the data are being processed now. We're getting caught up and fixing the issue, and the lab is definitely working with us on it to make sure that everything is corrected moving forward."


Practically, the backlog matters because case rates have been tied to reopening decisions. If it turns out there were a lot more cases than we thought there were at the time, then those decisions may have been based on bad information.
The state health department says that it can't say whether reopening decisions would have been different if the cases were reported at the time. In fact, they haven't really tried to find out if the metrics would have led to another decision. "We explicitly do not go back and recalculate reopening measures or other metrics like that, after the event," Grant says. "We use the best data we have available at the time, and that, ultimately, is what we base our decisions on."


Some of the lab results being reported now are positive results from May, and some go five months back, the state says. The state health department didn't give the Inlander exact dates on the hundreds of cases from Spokane identified in the backlog.

If you follow new cases from the Spokane Regional Health District, however, it looks like those cases are all happening since Friday.

That's where it's important to understand the different ways the health district reports cases compared to the state.

The state dashboard shows cases based on the day a person was tested for COVID. So if you're sick and go get tested for COVID on Tuesday, and the positive result comes back on Friday, the state goes back and assigns that as a Tuesday case.

The local health district, however, shows cases based on when it's reported to them that there's a new case. So the person who went and got tested Tuesday might be counted as a new Friday case if that's when the regional health district learns of the positive result.

And for this backlog in cases, it really skews the data. Since the state is just now notifying the local health district of positive cases from December, the health district is including that in the new reported case count from this week.


So what does this mean for members of the public who want to understand the level of spread in the community over time? It means probably don't use the health district numbers. Instead, look at the state COVID dashboard.

"We prefer to use the date the test specimen was collected," Grant says. "That, we feel pretty strongly, is the best way to look at and understand the current burden of disease in an area."

To see the difference, check out the trend of cases since March. Aside from a bump in April, cases have remained relatively steady, using the state's data.

Now, from the same time period, look at the health district's data.

That spike at the end there is actually due to the backlog.

Why does the health district every day publish reported cases, instead of adjusting based on when people were actually getting COVID? Partly because it's easier. The health district gets a daily report of cases from the state, and then quickly publishes the most recent data available.

It's also because it's usually it's easier for the public and the media to simply report a specific amount of new cases each day. Take another look at the state data above. See the gray part at the end there? That's for this week, but it's gray because the data isn't complete yet. The state still expects to receive more positive test results to assign to those days. Until they receive around 90 percent of the positive tests they expect to receive for those days, Grant says, it would be inappropriate to use the last week of data to come to any definitive conclusion about new cases in the last week. So it might not be the best tool to measure whether there was a big recent spike in COVID spread.

The regional health district dashboard might not be a great tool for that either — especially when there's a backlog of cases — but by publishing reported cases as they get them, the community can get a daily update that won't change when you go back and look at it a week later.

"We are committed to providing the most recent data, as we receive it, to ensure the community is updated daily," Hawkins says.

Even though the regional health district reports cases to the public this way, case investigators do have access to test dates for each of those cases, Hawkins says. They can look to see when those cases actually came back positive for investigation purposes. If a case reported to the health district in May actually was from a December COVID test, they know they don't need to do contact tracing for that.

The state, meanwhile, is still processing the roughly 22,000 test results (that includes both positive and negative results) from the backlog, and they're working in reverse chronological order to prioritize recent cases getting into the data systems as soon as possible. How local health districts report those cases is up to them.

"Local health departments make their own decisions about how to manage and share their surveillance data," Grant says.
Grant says it's not uncommon for there to be a delay between when cases come back positive and when it's reported to the local health district. It's just that this time, the backlog is on a larger scale. "This is more cases that we've found in a delayed fashion than I have generally seen in other situations, yes," Grant says. "And it's impacting several counties more than others, so it's more noticeable. More frequently, those situations are smaller numbers of cases, or spread out across the state, or across many states."

But for now, it doesn't appear that we're seeing a big spike COVID spread in Spokane. Just take the regional health district's word for it.

"It hasn't been a dramatic increase or decrease," Hawkins says.