After the death of George Floyd last year sparked international outcry and spurred a mass protest movement, the Spokane Regional Law and Justice Council could have been perfectly situated to deliver quick reform.

After all, the mission of the Law and Justice Council — an intergovernmental committee composed of local representatives from politics, law enforcement, the legal system and other community stakeholders — is to reimagine criminal justice in Spokane.

Instead, some of the group's members say, the council was mired in stalemate and dysfunction.

That was also the conclusion of the three Spokane authors of the Blueprint for Reform, an exhaustive list of "Smart Justice" criminal justice reform recommendations that spurred the resurrection of the Law and Justice Council in 2014.

"It got so big as to be unmanageable," Blueprint co-author and former federal prosecutor James McDevitt said of the council. "Quite frankly, I think it was frustrating for everybody."

Last October, McDevitt and the other authors issued a follow-up to the Blueprint that heaped criticism upon the Law and Justice Council. Thanks to internal disagreement, ongoing public scrutiny and the "unwieldy number of participants," they wrote, the group had "struggled to grow into an agile and effective working group necessary to catalyze change."

Spokane County Prosecutor Larry Haskell, a tough-on-crime critic of both the Law and Justice Council's broad scope and some of the Blueprint's other Smart Justice recommendations, took notice.

"The size of it actually created its own problem," Haskell tells the Inlander. "It was very difficult to get people to agree on a pathway forward."

So last month, Haskell offered up his remedy: Slash the 26 positions on the council in half to 13, keeping only those required by state law, and rename the body, as the Blueprint authors suggested, the "Criminal Justice Coordinating Committee."

Haskell's plan would ax the slots reserved for the three county commissioners and the Spokane mayor. Instead of getting a four-year guaranteed term for a member, the Spokane City Council would share a single annually rotating slot with all the other city councils, like those in Spokane Valley and Liberty Lake.

The Spokane County sheriff would continue to have a guaranteed slot, but the Spokane police chief wouldn't. As the county prosecutor, Haskell's position would be safe — but the county public defender and the city prosecutor would lose their spots.

Haskell stressed that the positions he wanted cut were selected only because they weren't explicitly listed in the state statute governing law and justice councils. But his recommendations struck existing fault lines, reopening long-running fights over a new jail, the frequency of felony charges and racial equity itself.

After all, in perhaps the most controversial move, the votes of all four community representatives on the council would be cut. Local community activists, Spokane city officials and even one of Haskell's fellow prosecutors vehemently objected.

"I don't believe this is the time to start eliminating voices from the conversation," says City of Spokane Prosecutor Justin Bingham, vice-chair of the Law and Justice Council. "We should be looking for diverse voices and not just an echo chamber." 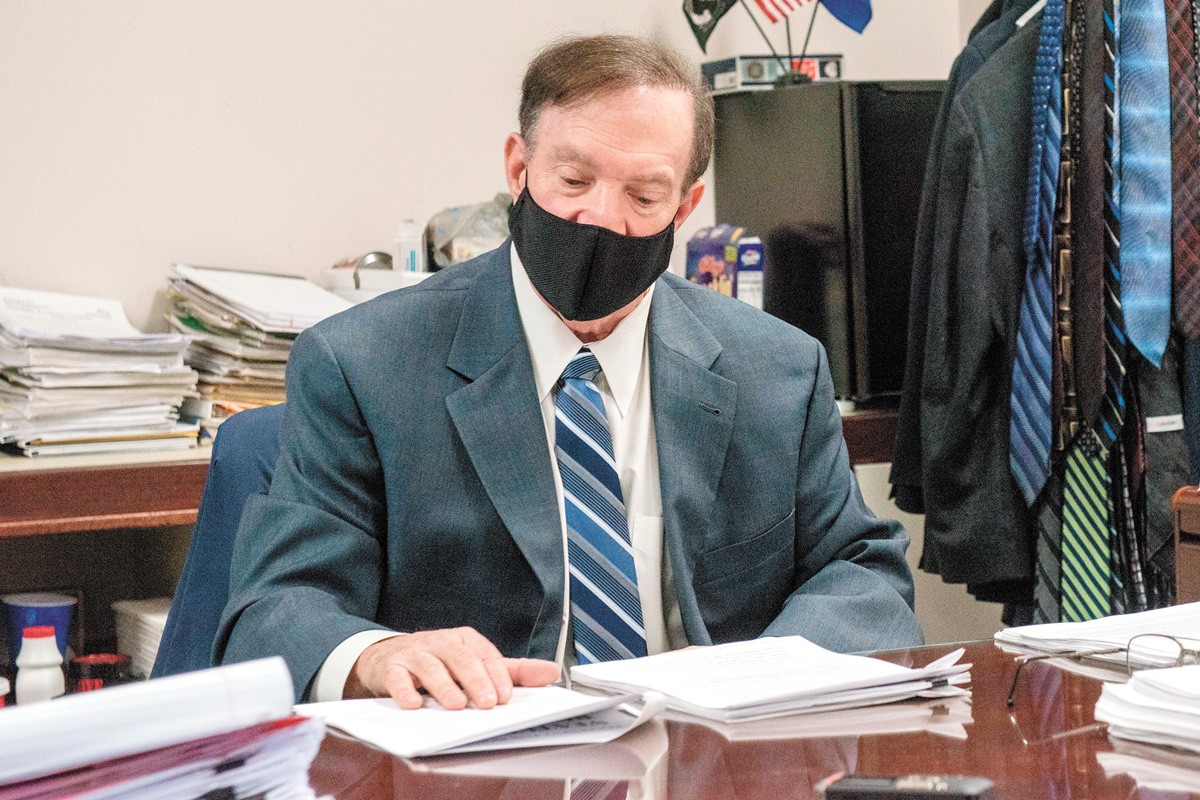 The Law and Justice Council can point to plenty of accomplishments in less than a decade.


The council spearheaded a $1.7 million MacArthur Foundation grant aimed at reducing the jail population. It helped to bring online a new intake and release center for the jail and to establish the soon-to-be-opened mental health crisis stabilization center.

But some members of the group grew disenchanted with the efforts, and tension increased between members focused on ridding the system of racism and inequality and those focused on cracking down on criminals.

Spokane Police Chief Craig Meidl writes in an email that he "did not feel that the SRLJC was making efforts to do much more than determine how to get people out of jail."

Instead of concentrating on the victims of crimes — and the repeat offenders who victimized them — Meidl argues, "the wave of sentiment appeared to be focused on reducing the jail population, in my opinion, to the detriment of the community."

In an effort to be inclusive, the group kept growing, and organizers "risked a barrage of inflammatory allegations" if they left out those who could feel slighted, Meidl wrote. It had unintended consequences, he argues.

"It's the old adage of turning an aircraft carrier — it doesn't move that well," McDevitt says. "It's got to be meaner, leaner with decision-makers who have their hands on the purse strings."

But City Council President Breean Beggs, another member of the group, doesn't think the problem was with the ship's size, so much as with the engine. Most of the committees that had been fueling the reforms early on had stopped meeting or had become ineffectual.

The Law and Justice Council started spending a lot more time simply listening to presentations, he says, instead of taking action.

"Every time we talk about making a decision as a group, Larry Haskell raises his hand and says we can't make decisions," Beggs says.

While the Law and Justice Council's Racial Equity Committee kept meeting, some of the members felt that their contributions were being ignored or stonewalled.

"We were talking about dissolving our participation because we have no input," says Curtis Hampton, a member of the committee and the local Spokane Community Against Racism advocacy organization. "Sometimes you feel like you're being patted on the head and being sent away."

Hampton applied for an open community representative slot on the Law and Justice Council, he says, but since he was ardently opposed to building a new jail, he says the county commissioners refused to select him.

Spokane County Commissioner Al French confirms that Hampton's anti-jail sentiment was the reason he was rejected, but he says the county commissioners also rejected two other candidates who explicitly supported a new jail.

"That kind of closed-minded approach wasn't what the board was looking for," says French.

Yet French is more open to Haskell's reinvention of the committee he chairs, even if it would cost the commissioner his role on it.

"It's just like an athletic sports team," says French. "If you're not moving the ball, you change the players."


Right now, Beggs says, it would be difficult to whip up enough votes on the Law and Justice Council to support a new jail.

"If you remove all the people who would vote against it — like the four community members, like myself — then you could do it," Beggs says. "In my mind, that's what's driving it."

Some of Haskell's most ardent detractors see a power grab.

"Larry Haskell and Commissioner French are enacting their rights as old White men to do whatever the hell they want," says Carmen Pacheco-Jones, a Black woman and one of the Law and Justice's Council's current community representatives.

Haskell adamantly denies that he was trying to sideline critics of a new jail. But even supporters of Haskell's reform sound increasingly weary.

In comments at last month's Law and Justice Council meeting, Sheriff Ozzie Knezovich not only endorsed Haskell's plan, he suggested that the regional criminal justice reform efforts were collapsing.

"Quite frankly, there's not a lot of desire to work collaboratively in certain areas," Knezovich says. "If we really want to follow the Blueprint, we should have followed it. We didn't."

Cut the county commissioners, the Spokane mayor and City Council positions from the Law and Justice Council, says Beggs, and lose vital collaboration among the "primary funders" — the decision-makers holding the purse strings.

Cut the public defender position, says public defender Thomas Krzyminski, and lose insights from the profession that can "do more to reduce recidivism than any judge or any officer."

And cut the community member positions, and lose the voices of the victims and former offenders, says Erin Williams Hueter, one of the council's other community representatives.

"I don't know if we are going to garner any trust in the system if we don't allow people to be heard," she says.

But Haskell argues that even though fewer people would be a part of the revamped body, his plan would actually expand representation. By requiring most of the remaining positions — like the appointed representatives of the city councils, police departments and municipal courts — to rotate every year, you'd get a lot more variation, he says.

It's an ironic choice of words. Last year, he made waves by voting against a "racial equity" goal as part of a criminal justice task force. Haskell objects to the very idea of "equity," which he interprets as not simply being evenhanded, but pursuing equal outcomes in the justice system.

Haskell suggests it isn't appropriate for a prosecutor to respond to racial disparities in the criminal justice system.

"I focus on what the law tells me to focus on," Haskell says. "We prosecute conduct, not skin color."

It's the kind of philosophical approach that can put Haskell directly at odds with some of the state's other prosecutors and would-be reformers.

"The problem with Larry Haskell's position is he's the person who holds power in a system that is set up to inherently harm people of color and favor people like him," says Kurtis Robinson, former NAACP president and a member of the Racial Equity Committee.

Under Haskell's proposal, the Racial Equity Committee, like all current committees, would disband.

But Haskell says community input is still crucial. Last month, he also introduced a resolution to establish a new Community Participation Committee, with five community members selected for a "diversity of ethnicity and diversity of opinion" on criminal justice issues.

"There should be a minority member or two on there," Haskell says. "But there should be potentially opinions that might differ from the minority view, if you will."

But Bingham, the city prosecutor, says a new committee isn't a sufficient replacement.

"Having a voice is one thing," Bingham says. "Having a vote is another."

Bingham sees the large size of the council — and even the conflict or "hard conversations" that community members bring to it — as an asset.