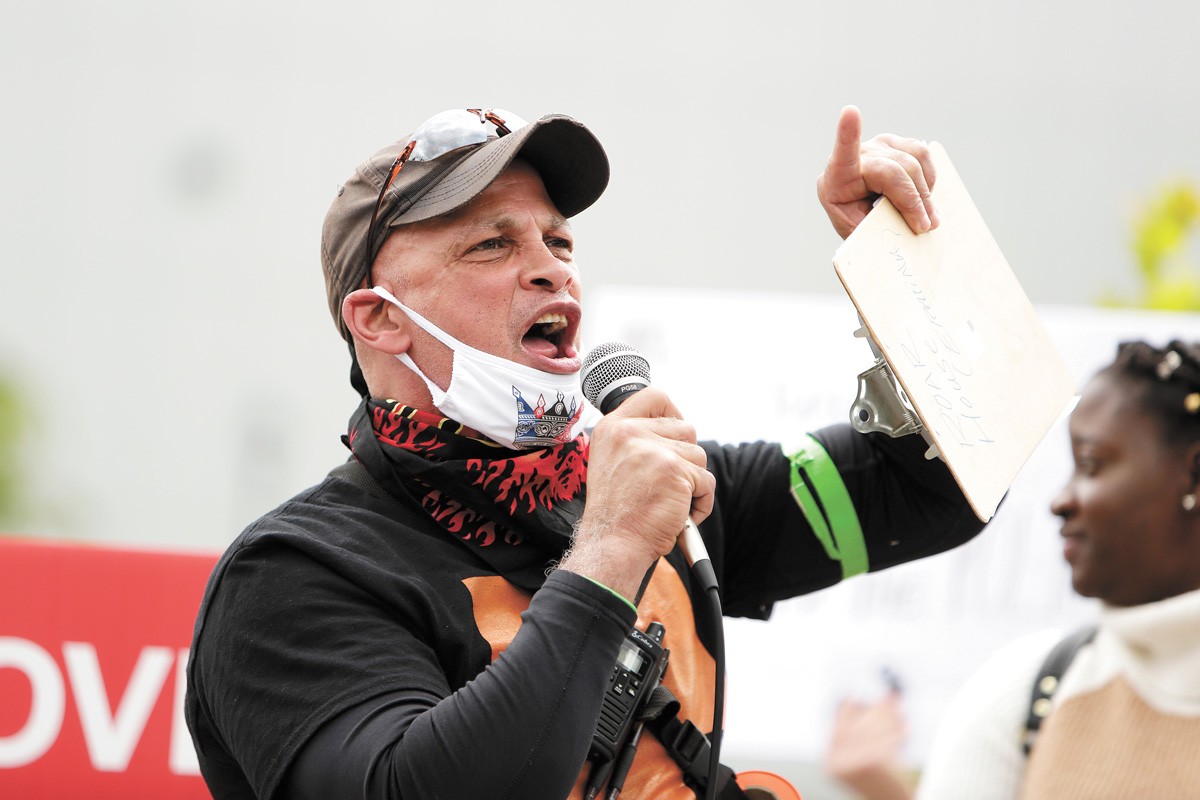 Instead, the two facilitators kicked off the May 18 discussion — nearly a year after George Floyd's death sparked national protests — with a particularly heavy icebreaker question: What was their own experience with the cops?

One by one, people spoke, including the police chief, Spokane's mayor, and Black, Hispanic and Indigenous leaders.

Kurtis Robinson, former president of the Spokane NAACP, talked about a sense of betrayal. He wanted to be a police officer when he was growing up, but after being arrested for robbery to support his cocaine addiction, he found himself being further traumatized by the profession he'd once considered heroic.

And Black Lens publisher Sandy Williams talked about the police pulling her over for no reason, saying her short hair and masculine clothes got her mistaken for a Black man. "There was no justification or reason" for the stop, she says.

And she noticed something during this inaugural meeting: All of the minorities in the group had painful personal experiences with law enforcement, while the White members' direct experiences were largely positive.

"It was a microcosm of the gulf between our two communities," Williams says.

But many of the people there have shared these experiences before. To Spokane Police Chief Craig Meidl — who attended via video conference due to a recent shoulder surgery — the statements largely reinforced a message he's already heard.

"We've had these conversations for the last five years," Meidl says.

Yet while this first discussion represented the beginning of a new chance for police reform, some of those, like Robinson and Williams, tempered their optimism for yet another big conversation about race and policing with a kind of wariness. There was a sense that they've been here before.

"The intentions of the people in the room seem genuine, but they have in the past, too," Williams says. "Every one of them starts out with great hope, and somewhere along the way we don't get to the goal."

Even though it happened more than a thousand miles away, Meidl says, the death of George Floyd last year "really ripped off the scabs" of injuries that local people of color had experienced at the hands of the law enforcement. His department didn't kill George Floyd, but he knew it was still a massive blow to his efforts to build trust with those communities.


But Beggs, a longtime police reform advocate, saw an opportunity for real reform in the aftermath. He put together a list of 17 potential reforms the City Council could pass, including mandating more transparency, deploying more behavioral health specialists, and restricting the department's use of dogs, rubber bullets and armored vehicles.

But Beggs says then-City Administrator Wes Crago warned him that if he just tried to push it through the council, "there'll be a fight," and suggested they instead sit down with the chief and other community members and find reforms they could all support with "full-throated enthusiasm." Beggs agreed.

By August, city spokesman Brian Coddington says, they had an outside location at the convention center booked, planning on kicking off a 100-person community police reform discussion. Another spike in COVID cases killed the plan.

Nine months passed. Crago resigned for still-not-fully-explained reasons. The Spokane Police Guild and the city agreed on a new contract. Gov. Jay Inslee signed into law the Legislature's own slew of police reforms.

And when Spokane's police reform group finally held its first meeting last month, the group had been whittled down to 17 members and two facilitators — and met behind closed doors.

Coddington even sent out a nondisclosure agreement and asked attendees to sign it — an initial attempt to create a "safe space" for attendees to talk, he says. Ultimately, the NDA was abandoned.

While Mayor Nadine Woodward says future conversations may be more open, the private nature of the first conversation was critical for everybody to get to know each other "at a personal, raw, honest level."

"We don't want the light on," Woodward says. "To have that in the public, those conversations really won't be authentic."

But even in that first meeting, the challenge for coming to an agreement was clear. On one side you had community members like Robinson who wanted the police department to acknowledge that "race is the issue."

Fixing the problem, he thinks, will take more than just policy tweaks.

But on the other side, you had Chief Meidl. He says that it's important to keep an eye out for bias and prejudice, but he's just not seeing it widespread in his department.

"With all of the body cameras, and all of the cellphones, all of the surveillance cameras ... there is nothing to show systemic racism by the Spokane Police Department," Meidl says.

Three reports on race in the Spokane Police Department over the last half-dozen years have all found major racial disparities. For example, Black people only make up about 2-4 percent of the population, but according to the most recent report by a consulting firm called Police Strategies, they make up 11 percent of the arrests and police stops.

"The data shows disproportionality all over the place," Robinson says. "Period."

But Meidl points to other data points in the report — about 12.5 percent of the suspects accused of crimes in Spokane are Black, for instance — to argue that some racial groups are being stopped and arrested more often because the crime rate is higher for those groups.

Meidl stresses that he's not saying that skin color causes people to commit more crime, but rather that differences in other factors that drive crime, like "poverty, education, home life" and "who you associate with" were to blame.

"The data will show you that African Americans have a lower median household income, lower graduation rates and all of these other things," Meidl says. "Are we causing the problem? Or are we dealing with a symptom of another problem?"

Meidl says the goal of these community conversations is to respectfully seek out common ground.

"Let's talk about experiences and feelings and history and past transgressions," he says. "Let's also talk about the current data. What does the data show?"

But Beggs pushes back hard against Meidl's analysis, sending over a lengthy Seattle University School of Law paper rebutting a similar claim made by two state Supreme Court justices about the disproportionality in Washington state's prison system.

Less than 4 percent of those in poverty in Spokane are Black. Income alone can't come close to explaining the disproportionate number of police stops, Beggs argues, much less the fact that Black people are far less likely to actually get a ticket after being pulled over than White people.

"The reason they didn't get a ticket is because they didn't do anything wrong!" Beggs says.

Robinson comes closer to agreeing with Meidl's premise. But he says there's a reason for that "tough truth" about higher crime rates in some communities: Systemic racism — decades of disenvestment and discrimination, including from law enforcement — has done serious damage to the Black community.

And Williams says that this kind of debate has effectively derailed reform efforts in the past.

"You never get to doing anything because you're always having that conversation — that we're not all getting stopped because we're criminals," Williams says. "You spend so much time there that you don't get to the real work."


And, now, thanks to the state Legislature, they'll be implementing additional reforms in the months ahead. This last session, the Legislature imposed restrictions on the police use of tear gas, neck restraints, car chases and no-knock police raids. It strengthened rules requiring officers to report bad behavior they witness from fellow officers and intervene to stop it.

Most crucially, Beggs says, the state passed a law requiring all appropriate de-escalation tactics to be exhausted before deadly force is used, including creating physical distance, negotiating verbally, and calling in mental health specialists.

Beggs still has reform items on his wishlist. He wants to pare back the special "qualified immunity" protections that make it impossible to sue police officers in many circumstances, a stance that is likely to face fierce opposition from the police unions.

Then again, contrary to their reputation as the "big, bad Guild" opposed to reform, Guild Vice President Tim Schwering notes that they were the ones who invited Beggs to the table to help negotiate the police contract earlier this year.

"What this city needs is actually more oversight," Schwering says. "My idea is that we should really have an inspector general [providing oversight] for the entire city."

Schwering calls for the reform discussions to be more open and encourages the Inlander to request to attend the next still-unscheduled meeting.

The idea of having an independent inspector who could scrutinize issues throughout the entire city is one that Beggs himself publicly championed. Beggs believes the shift in strategy from the Guild is genuine.

"I think it's an evolution," Beggs says. "The old way wasn't working for anyone."

For her part, Woodward says she thinks the police department is"doing a really good job," but also says, "I think we're at a place where people want to see some action, to be honest with you. ... That's not going to happen overnight."

Neither is healing the rift between law enforcement and communities of color in Spokane. Meidl says it's a "generational thing that will take many generations."

And while Robinson deeply disagrees with Meidl's view that there's no systemic racial bias in the police department, he says he sees a "quality of character" in the police chief, and he's choosing to believe that, with time, he can convince Meidl to come around to his way of thinking.

"I am fighting for my hope," Robinson says about transforming the police department. "If I was to rely on them to give me hope, I would be hopeless." ♦