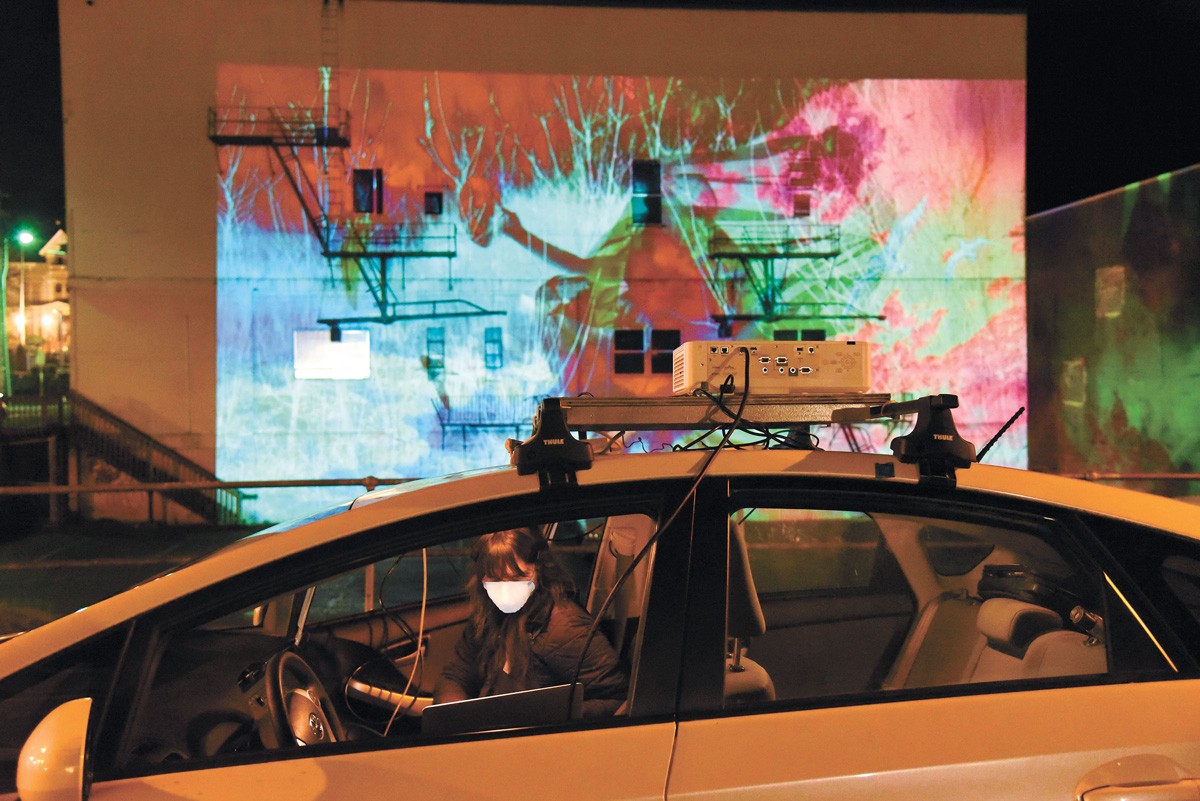 Although we've long been used to making the trek to see art in a gallery, the events of the last year have perhaps kept some of us at home. But a new pop-up art showcase hosted by Laboratory, Spokane's interactive art residence program, is bringing the art gallery to us.

Its new pop-up style series is called Visions of the Future, and it will be taking the works of various artists from around the country and projecting them onto buildings around town.

Kryston Skinner, executive director of Laboratory, had planned on launching an interactive light show in Riverfront Park sometime in 2020. But COVID came along and changed all that, so Skinner says the organization was looking for some kind of interactive piece that could be mounted through safer methods.

Enter Sarah Turner, a new media artist based in Portland. Through her residency with Laboratory, Turner's Mobile Projection Unit, a so-called "roving studio" that mixes experimental art and digital projectors, is about to make its next stop in the Inland Northwest.

"It's about opening up access to this type of art for different artists," Turner says of the Mobile Projection Unit, noting that the technology it requires is often too expensive and bulky for your regular working artist. "I like to take up space for both myself and other artists while cutting down costs and ... distributing the tools of production."

Visions of the Future will be popping up around town starting at sundown on March 9 and continuing through March 13. It works like this: A swiveling, high-powered projector is mounted on top of Turner's car, and images and videos on a laptop are then run through video mapping software and up onto the side of whatever piece of architecture is serving as that evening's makeshift canvas.

The project has been a blessing in the midst of the pandemic, Turner says, because its mobility allows audiences to engage with art in outdoor and socially distanced venues.

"The secret's kind of gotten out," Turner says. "We've been able to be hired by several art institutions in Portland, doing a variety of showings with different types of work over the summer. We did a lot of screenings with the Black Lives Matter initiative with different activist groups (in) Portland. And then we were also able to get commissioned by different art organizations in Portland for our own personal artwork."

Of the Spokane buildings that will be utilized in the Visions of the Future pop-up, Turner says some of the recognizable landmarks include the towering Wells Fargo Building downtown and the old water treatment building inside Riverfront Park. Turner also says the project will make its way into more residential neighborhoods.

Turner's own work will be featured in the showcase, alongside 3-D and video pieces by Hasan Mahmood, Laura Camila Medina, Jessica Earle, Lucia Riffel, and Jason and Debora Bernagozzi.

"The artists' work that we're showing is fairly experimental, so they're less design-focused and more conceptual," Turner says. "The themes really range from being super dreamy and colorful and almost psychedelic to being more abstract and industrial feeling."

"I hope it just gives people some hope and excitement for the future," Laboratory's Skinner says of the project. "I know our community is really hurting. And a lot of fun things have been canceled due to safety concerns, and understandably so. So I hope this just gives them something to look forward to what the future holds."

"It just makes the work more magical in a way, and it allows for people to gather and view it in this kind of time-based ephemeral, performative kind of way," Turner adds. "Especially now, during COVID, it's even more interesting to be able to still gather people and have this kind of communal viewing experience." ♦

Visions of the Future • March 9-13 from sunset to 8 pm in various locations • See facebook.com/ LaboratorySpokane for updates

The original print version of this article was headlined "Mobile Canvas"